Has any other U.S. radio station provided such an interesting contrast between constant movement and long-term stability as Philadelphia’s KYW (1060)? Its license has been in two parts of the country, its callsign has bounced around to three big cities, and yet it boasts one of the oldest high-power transmitter buildings in the nation. And after decades in the same studio site, it’s about to move at the studio end for the second time in just a few years.

We’ve shown you the outside of the KYW transmitter facility in Whitemarsh Township, west of Philadelphia, on several occasions here at Tower Site of the Week (here’s one from 2003, for instance), but it wasn’t until just a few weeks ago that we finally had the chance to get a look inside. And since KYW is one of our featured sites in the brand-new Tower Site Calendar 2014 (now shipping from the Fybush.com Store!), we’re eager to share it with you in this bonus Site of the Week… 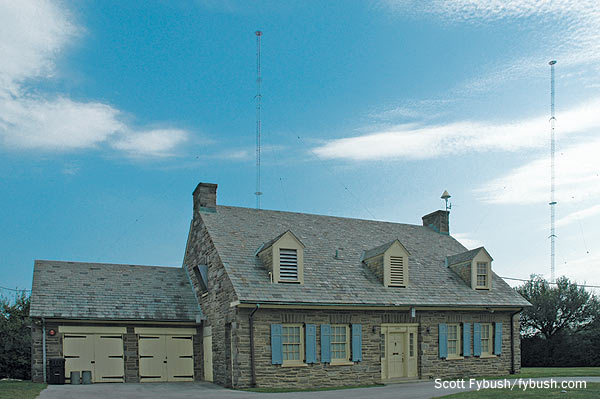 The history, of course, first: The KYW callsign first showed up on the radio in Chicago way back in 1921 as one of Westinghouse’s first stations, operated in partnership with electrical mogul Samuel Insull and the Chicago Civic Opera. (Legend has it that the first words spoken on KYW’s inaugural broadcast, by a diva walking on stage at the opera, were “It’s dark in here!”)

KYW was far less successful than its sister stations KDKA and WBZ, perhaps due in part to the intense radio competition in the Windy City, and perhaps due to political struggles that kept it from winning a stable spot on the dial. The Federal Radio Commission’s attempt to balance the number of clear channels in different regions of the country eventually resulted in KYW’s 1020 kc spot being assigned to the mid-Atlantic region and competing applications for the frequency coming in from Detroit’s WWJ, Pittsburgh’s WJAS and even Philadelphia’s WCAU.

In an attempt to hang on to 1020, KYW itself applied to move to Philadelphia, a move that Westinghouse’s political power no doubt helped to push through the FCC, and on December 4, 1934 KYW shut down its Chicago operations and relocated to this new site on Joshua Road, building a four-tower antenna system out of steel poles mounted atop wooden bases. I believe, but am not certain, that these supported a horizontal wire antenna. The building itself, designed to blend in with the residential neighborhood around it, set the trend for Westinghouse design for the next few years: aside from being faced in different materials, it’s very similar to the clapboard building built in 1940 for WBZ in Hull, Mass. and the brick building KDKA built in 1939 in Allison Park, PA.

(What became of KYW’s previous site on Army Trail Road in Bloomingdale, Illinois? Westinghouse had used it for barely five years, evidently, and it quickly arranged a sale to NBC, which made it the new home of its WMAQ 670. You can get a look inside that facility here.)

In 1941, KYW increased power from 10 to 50 kilowatts and then made the NARBA move to 1060, and in 1949 it replaced the four-tower antenna system with the two 450′ Ideco top-loaded towers still in use. At the time, KYW’s directional pattern provided useful coverage of the entire Philadelphia market even as it protected adjacent-channel WHN (1050) in New York; the suburban growth outside the pattern, deep into New Jersey and up into Bucks County, would come later.

This site changed ownership several times again as part of the messy NBC/Westinghouse KYW swap of the 1950s, in which NBC pressured Westinghouse to swap its Philadelphia stations, KYW (1060) and WPTZ (Channel 3), for NBC’s WTAM (1100), WTAM-FM (105.7) and WNBK (Channel 3) in Cleveland. In 1956, NBC took control of Philadelphia and this station became WRCV, only to be restored to Westinghouse control and the KYW calls in 1965 after Westinghouse went to court to fight what it says was undue pressure from NBC, which allegedly threatened to pull its affiliation from other Westinghouse stations if it didn’t sell Philadelphia.

And that, in turn, explains how KYW/WRCV was, for a time, the lone NBC owned-and-operated AM station that had a Westinghouse transmitter instead of the usual RCA. Today, you’ll see no sign of that venerable Westinghouse 50HG transmitter when you walk into the KYW transmitter building. (The “front door” is just there to look pretty; it’s actually just a dummy, and the real entrance is over on the side.)

A series of extensive renovations over the years have replaced the original big transmitter room with a somewhat smaller walled-in transmitter space that’s as pristinely clean as any transmitter plant we’ve ever seen. Several generations removed from the Westinghouse, the current transmitter lineup here consists of a DX50 on one side, circa 1989, and a newer 3DX50 facing it across the room, with the usual row of racks in the middle. As part of the CBS Radio cluster in Philadelphia these days, KYW is on a fiber ring that connects all of the company’s transmitter and studio sites, serving as the main STL link among other things.

KYW’s phasor is at the far end of the room, across from a compact office area. Upstairs in the attic is about the only remaining relic of the site’s original design, the big blowers that were part of Westinghouse’s innovative air-cleaning design used at its other sites of this era as well.

When KYW built this transmitter plant way out in the boonies of 1934, it didn’t yet have its own studios in center city Philadelphia. For the start of its Philadelphia era, KYW partnered up with WCAU, contracting with that long-established Philadelphia station to manage its programming and studio needs from its magnificent new Art Deco facility at 1622 Chestnut Street. (That building still stands and is now, after an extensive restoration, the home of the Art Institute of Philadelphia.)

A few years later, KYW built its own showplace studio at 1619 Walnut Street, which would remain its home through the NBC/WRCV interregnum and into the first few years of the Westinghouse restoration, post-1965. (Mike Douglas’ syndicated talk show originated there for several years.)

The 1938-vintage radio building wasn’t especially suitable for a combined TV/radio operation three decades later, especially with KYW radio having launched its successful all-news format in 1965, and so in 1972 Westinghouse opened a new, larger plant for KYW radio and KYW-TV (Channel 3) at the corner of Fifth and Market Streets along the new Independence Mall. That building lasted 35 years before new owner CBS sold its prominent site (it’s now the National Museum of American Jewish History) and split off the radio and TV operations into separate locations.

And that brings us to this set of studio pictures: while KYW-TV moved to the big floorplate of an office building at 15th and Spring Garden Streets, KYW radio barely moved at all, relocating less than a block eastward to the office building at 400 Market Street just behind its longtime home. Those are the studios you see here, occupying one floor of this building, just above a separate floor for another CBS station, then WYSP (94.1) and now WIP-FM (94.1) and sister station WIP (610).

Just as in its previous home, the new KYW boasted “Studio K,” “Studio Y” and “Studio W,” looking out into a newsroom rather more open and spacious than its prior location. (Two of the studios alternate as all-new studios, with the third being used for longer-form talk and interview programming.) Look closely at the lobby photo above: in addition to than nifty window behind the reception desk that looks into the TOC/rack room, the inlaid floor represents the gridded street plan of Philadelphia, with City Hall at the center and the four famous squares surrounding it.

But after just a few years in this space, KYW is on the move again. By mid-2014, CBS plans to relocate the radio facility to share the spacious KYW-TV newsroom over on Spring Garden, consolidating the rest of its radio cluster here at 400 Market Street by rebuilding the present KYW space into new studios for classic hits WOGL (98.1) and talk WPHT (1210), which will move into Center City from their current home out in suburban Bala Cynwyd. That means that for the first time in more than 40 years, KYW won’t be able to open its news wheels with “From Independence Mall, this is Newsradio…” – and it means we’ll have to find another excuse to head back to Philadelphia for an updated tour!

Thanks to KYW’s Glynn Walden and Steve Butler for the tour!

That lovely KYW photo at the top of this page (taken on an earlier trip; this 2013 visit came on a gray, rainy Philadelphia morning) is just one of the many neat tower sites in the all-new Tower Site Calendar 2014.

It’s back from the printer and now shipping, spiral bound, shrink wrapped and best of all, with a convenient hole for hanging!

In addition to KYW, this year’s gorgeous electronic pinups include the iconic towers of Catalina Island, a combiner system in St. Louis, the twin towers of KNRS in Salt Lake City, a historic rooftop site in Jamestown, New York and many more!

If you want a tower calendar on your wall NOW, you can pick up the current 2013 edition for just $5 with your 2014 order!

Then check out our store page for our other great merchandise, including the last-ever FM Atlas, the new NRC AM Log and a model of the KSAN tower.

NERW Extra: Inside the LPFM Applications