The technical history of FM radio in Los Angeles stretches back seven decades now, but much of it can be summarized in one short sentence: every station that could possibly get its transmitter up to Mount Wilson has done so. There’s no question at all: at more than a mile above sea level, with clear line of sight to nearly the entirety of the sprawling market, Mount Wilson has been the place to be for FM ever since Earle C. Anthony put KFI-FM (105.9) on the air up there in 1946, and that’s one reason we’ve featured it multiple times on Tower Site of the Week (here, for instance, and here.)

But along the winding road up to Mount Wilson, a few other sites have played important roles in the LA FM story, too. There’s the Mount Lee site above the Hollywood sign (no longer in broadcast use) where the market’s first FM signal, Don Lee’s K45LA (later KHJ-FM/KRTH) signed on in 1941. There’s the “Briarcrest” site in the Hollywood hills that’s home to what’s now KYSR (98.7). There’s the Montecito site (seen here) that was home to the old KFSG-FM 96.3, and the Verdugo Hills site (seen here) that’s now home to 96.3 (now KXOL) and KROQ-FM (106.7).

And then there’s Flint Peak in Glendale, which somehow manages to have ties to nearly all of those other sites, and then some.

Flint Peak took to the airwaves in December 1947, when the Echo Park Evangelistic Association put KKLA (97.1) on the air as a 58 kW FM companion to its existing AM station, KFSG (1150). At the time, KFSG(AM) was broadcasting from the Angelus Temple church on Glendale Boulevard, not a suitable location for FM broadcasting, and so a separate FM site was a must.

Whatever the case, KKLA didn’t last long. Like so many early FMs, it was gone by 1951, ending the first chapter in KFSG’s FM story. (In the 1960s, KFSG bought out its AM share-time partner, KRKD, taking over KRKD’s Montecito Heights facility for both fulltime AM operation and KRKD-FM on 96.3, which would in time become the new KFSG-FM. We’ll catch up to it again in a bit…)

Flint Peak didn’t stay silent for long. The 97.1 facility was reactivated as KFMU, soon joined at the site by KBMS (105.9), a superpower 71-kilowatt facility using the channel vacated by defunct KFI-FM, and by Glendale-licensed KUTE (101.9). In the 1960s, new arrivals at the site included the University of Southern California’s KUSC (91.5); KPPC-FM, Pasadena (106.7), relocated from its original transmitter site at the Pasadena Presbyterian Church; KPOL-FM (93.9), moving up from one of the KPOL (1540) AM towers east of downtown Los Angeles, and religious station KHOF-FM/KKLA (99.5), which had started from a lower Glendale location.

By the turn of the century, Flint Peak had quieted down again. Remember the thesis with which we started this essay – eventually, everyone who can move to Mount Wilson does so? That’s what happened to Flint Peak: 93.9 (by then KZLA-FM and later KXOS), 97.1 (KHTZ/KLSX/KAMP-FM), 99.5, 1o1.9 (KSCA) and 105.9 (KWST/KPWR) all moved to Wilson itself, while KUSC went to nearby Mount Harvard. As for 106.7 (later KROQ-FM), it moved up as well to the Verdugo Hills site, gaining additional antenna height.

But while one group of signals moved out, another moved in. The former KNOB-FM (97.9) had been licensed to Long Beach, transmitting from Signal Hill overlooking that port city and later from the Baldwin Hills, and serving only a part of the wider Los Angeles market. In 1997, it was relicensed to East Los Angeles and moved to Flint Peak, and from there the renamed KLAX-FM became a market-dominant Spanish-language signal for a few years.

And remember 96.3? In the early years of the 21st century, it moved off the old KRKD Montecito Heights site to Flint Peak, flipping to a “Hurban” format as KXOL and challenging KLAX-FM. That, in turn, provoked a lawsuit from Emmis, which had ended up with ownership of the Flint Peak site as part of its purchase of KPWR 105.9, and which had leased tower space to SBS for 96.3 on the condition that it not directly compete against KPWR’s urban format. So 96.3 didn’t stay long at Flint, with KXOL relocating to Verdugo (the KROQ 106.7 site) in 2005 and the parties eventually settling a lawsuit over the dispute. (SBS had also complained to the FCC that the Emmis lease provisions constituted an impermissible level of control over another licensee’s programming, but that complaint was dropped as part of the settlement.)

While KLAX-FM is the only station currently using Flint Peak as its primary site, the  facility has found a new and very important purpose in life as an auxiliary transmitter location. In recent years, wildfires and landslides have made access to Mount Wilson more difficult than it used to be, and at one point fires crept so close to the transmitters that there was some real fear that the Wilson sites could be lost completely. In the nation’s #1 market by revenue, any downtime is unacceptable, and so stations began to look to the “lesser” LA FM sites for backup use. Several stations that had moved off Flint Peak had retained auxiliary sites there: KXOS 93.9, KKLA 99.5, KPWR 105.9 and KROQ 106.7; in recent years, they’ve been joined by KLVE (107.5) and soon by KPCC (89.3). And in May, Emmis sold the site to Richland Towers for a whopping $6 million. The Richland purchase heralds yet another new life for the old site: in addition to marketing Flint Peak for FM backup use, the company is also planning to develop Flint for TV backup use, touting it as “by far the best off-Mount Wilson auxiliary facility in the Los Angeles market.”

That means our visit to Flint Peak in April 2008 caught the site just before some big changes. The old self-supporting tower (perhaps the original KKLA tower?) carried three auxiliary antennas: KROQ at the top, KXOS in the middle and KKLA at the bottom, and so far it remains unchanged. But Emmis was already making changes on the monopoles nearby: one of them, carrying the old KPWR 6-bay aux antenna, was extended upward to hold a new KPWR antenna and another aux antenna shared by Univision’s KSCA 101.9/KLVE 107.5. KPCC, when it installs its aux, will go on another tower here that has never had a broadcast tenant.

As for the primary, KLAX-FM runs off a directional two-bay antenna at the top of another monopole, with KKGO (105.1) running its auxiliary just below.

I don’t have pictures of any of the auxiliary transmitters (and can’t remember why not, almost four years later), but we’ll close with a few shots inside the old building here. It’s been divided into a warren of small rooms, and there are some interesting stories about them – there’s some government equipment in one room that nobody talks about much, and there’s another door that remained locked for years, supposedly with equipment inside that belonged to the Scientologists. And inside the front door, as renovations were just getting underway, they’d removed a few later layers of flooring to find the original linoleum, carefully inlaid with the “KKLA” callsign from 1947.

Thanks to Fred Holub for the tour! 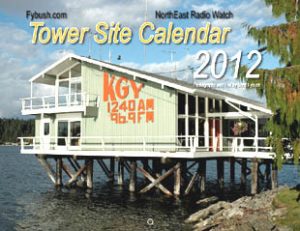 The Flint Peak photo is one of many you’ll find featured in the all-new Tower Site Calendar 2012, available now from the all new Fybush.com store!