by Scott Fybush
in Florida, Free Content, Tower Site of the Week
4 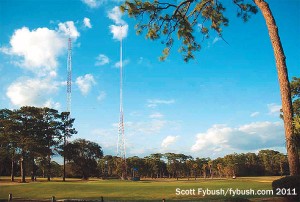 Photos and text by SCOTT FYBUSH

It’s that time of year again: with a big stack of brand-new Tower Site Calendars just about to come back from the printer (and available for ordering, right now, at the Fybush.com Store!), we take a few weeks out of our usual chronological recap of our (semi-) recent travels in order to share some of the pretty pictures you’ll see inside your new Tower Site Calendar when it arrives in your mail.

This week’s feature includes some other “new beginnings,” too”: with a few minor exceptions, we’ve now shown you just about everything we visited during the course of 2010, and that means we’re into our 2011 adventures.

Instead of our usual pattern of holing up in our upstate New York home base over the winter, early 2011 found us escaping for a sunny trip south. Over the course of a week and a half in February and March, we visited hundreds of sites across north and central Florida, an area long missing from our Site of the Week coverage.

The 2012 calendar included one site from that visit, WDAE (WSUN) in St. Petersburg, and your 2013 calendar leads off with another Florida site, and from the first day of the trip, no less. AM 930 in Jacksonville is now WFXJ, but for most of its history it was WJAX, and most Jacksonville radio folks still think of this as the “WJAX site.” There are some other interesting parallels between WDAE/WSUN and WJAX/WFXJ: both stations are now Clear Channel-owned sports talkers, both have passed their heritage calls along to smaller signals up the dial, and most interestingly, both stations were municpally-owned for most of their existences.

One glimpse of the calendar picture at the top of the page should tell you this site oozes history – and lots of RF, too. There aren’t many 5-kilowatt stations that can boast a 590-foot main tower…much less a 590-foot main tower that’s a Blaw-Knox (albeit a uniform cross-section one, not a classic WLW-style diamond). Then, consider the location of that 590-footer and its shorter self-supporting nighttime counterpart: right in the middle of the Hyde Park Golf Course, on the banks of the Cedar River a few miles southwest of downtown Jacksonville.

While the towers sit prominently in the midst of this historic course (it opened in 1925), the brick transmitter building (complete with vintage “WJAX” calls on the door) perches inconspicuously in a grove of trees right next to the more modern clubhouse.

I’ll admit off the bat here that I don’t have quite as much historical information about this site as I’d like to be able to offer. Here’s what we can say with certainty: Owned by the city, WJAX was one of the first stations in Florida when it signed on in 1925 from a site at the Jacksonville city waterworks, across from Confederate Park on what’s now the north side of downtown. It settled down pretty quickly at 900 on the dial, and by the time NARBA shifted it from 900 to 930 in 1941, WJAX was operating with 5000 watts by day and 1000 watts at night.

By then, WJAX had already moved out to the golf course in Hyde Park; the exact date of the move remains lost in the mists of radio history for now, but it appears to have been sometime between 1935 (when WJAX was still running 1000 watts full-time from the waterworks) and 1938, when WJAX was listed with 5000 watts day, 1000 watts night from Hyde Park.

By 1947, WJAX had added an FM sister on 95.1, transmitting from the top of the tall tower, and by 1949 the city had a construction permit for WJAX-TV on channel 2. Remarkably, a city that had boasted only three radio stations at the start of World War II boasted CPs for four TV stations not long after the war; as it turned out, only one of those CPs (WMBR-TV 4, tied in with WMBR 1460) actually took air, with CPs for WJAX-TV 2, WPDQ-TV 6 and WJHP-TV 8 going unbuilt. WJAX fought to keep its permit after the FCC tried to delete it for repeated construction delays, but in the end the channel 2 allocation (as well as 6 and 8) were shifted elsewhere. It would be four more years before WJHP-TV finally took flight as a struggling UHF signal on channel 36 and nearly a decade before Jacksonville’s second VHF outlet on channel 12 finally took air. (There was a long-running fight at the FCC among several applicants for that channel, including WJAX.)

On the radio side, WJAX kept chugging along on both AM and FM through the post-war decades, remaining municipally-owned right up until 1983, when the city finally sold the stations to Silver Star Communications at auction, reaping just over $3 million. The WJAX calls went away on FM in 1987, when 95.1 took on the WAPE calls and top-40 format that had dominated Jacksonville for decades on AM 690; the AM split off to new owners as WRXJ, eventually became part of Lowell Paxson’s statewide group of all-news stations as WNZS, and then settled in under Jacor/Clear Channel as WFXJ.

The FM station left the 590-foot AM tower in the late 1980s, eventually moving to Cox’s master FM site next door to the current channel 12 studios near downtown, but an auxiliary antenna remained in use here at Hyde Park for some time, and it’s still mounted on the side of the tower even though it’s no longer used.

Today’s WFXJ is a Fox Sports Radio outlet, with a translator on 106.9 that signed on after our 2011 visit, and we’ll leave you this week with a sneak preview of some of our other Jacksonville tours on that busy day last year: the WFXJ studios are part of the Clear Channel cluster studios in an office park out on the east side of town. We’ll see much more of that facility, and the rest of Jacksonville, in the months to come here on Tower Site of the Week! 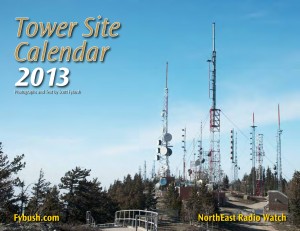