by Scott Fybush
in Free Content, Massachusetts, Tower Site of the Week
10 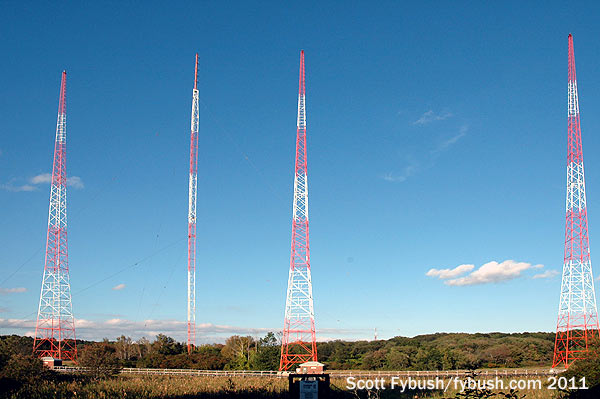 Our preview of the brand-new Tower Site Calendar 2013 (just back from the printer and now shipping!) continues this week with a site that was once practically in your editor’s backyard.

But despite living only a few miles from the Lexington, Massachusetts tower site of Boston’s AM 1150 through most of the 1990s and driving by it all the time on Route 2, it took until 2011 before I finally got a chance to peek inside – and to share that peek with you. 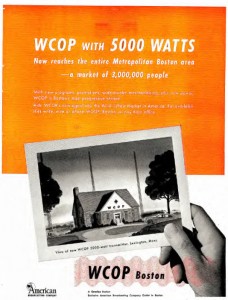 The three AM towers at this site date back to the days just after the end of World War II, when the end of steel rationing and the availability of construction crews suddenly allowed AM radio in the U.S. to begin the largest boom the band had experienced since its first big explosion back in 1922.

The refinement of directional antenna technology and a loosening of FCC’s rules allowed hundreds of new stations to take the air on the “regional” channels at the upper end of the band, and it gave some of the existing stations on those channels an opportunity to power up.

One of those stations was Cowles Broadcasting’s WCOP, named for its studio location at the Copley Plaza Hotel in Boston. When it signed on in 1935, WCOP was running 500 watts on 1120 from a transmitter site along the Charles River in Allston, and it remained a 500-watt non-directional signal when it was shifted up the dial to 1150 by the NARBA treaty in 1941.

But the post-war AM boom gave WCOP an opening to increase its power to 5000 watts, day and night, and Cowles moved with extraordinary speed to get there, chronicled the whole way with a series of full-page ads in Broadcasting magazine. (You can read them all over at David Gleason’s equally extraordinary archive at AmericanRadioHistory.com, from which we pulled the June 24, 1946 ad above. Go ahead and click on it – or any other image here – to make it bigger!)

How fast did WCOP move? In March 1946, it was touting the grant of its construction permit – and by June, it was touting its new big signal and ABC affiliation. (There may have been a good reason for WCOP’s haste: that site it had been using on Soldiers Field Road in Allston quickly went through a transition of its own as construction crews got busy removing the WCOP tower and transmitter building and replacing it with a new studio for WBZ radio and television and a new tower for WBZ-TV. Almost 65 years later, WBZ’s still there, though the original building has been expanded several times over the decades since. Excavations for one of those expansions, in 2004, uncovered one of the original WCOP tower footings.)

Back to WCOP: the 5000-watt signal it touted as reaching “the entire Metropolitan Boston area” back in 1946 quickly fell victim to another postwar boom. The growth of suburbia out along the Route 128 beltway, and then far beyond, soon outgrew the 1150 signal. Up against even bigger new 50,000-watt signals from WHDH and WNAC, WCOP never emerged as a huge player in the Boston market, but it used its underdog status to experiment with new formats: it was one of the first stations in town to depend heavily on music DJs (some of them originating from a studio out here in Lexington) and later on one of the first big-city stations to play country and western music. It was also a fairly early proponent of FM: WCOP-FM (100.7) signed on in 1948 from a new 476-foot tower back in the field to the north of the east-west AM array, and it was known for a time for its syndicated classical-music programming.

By the late 1970s, 1150 was flipping fast and furious as it tried to find a niche: top-40 WACQ, beautiful-music WHUE (simulcasting with 100.7 as WHUE-FM, though the FM transmitter moved in 1980 to a better location atop the Prudential Tower in the Back Bay), standards WSNY, then one more bid for a mass-appeal format in the 1980s as oldies WMEX, reviving the old AM 1150 callsign. The 1990s saw still more formats and calls – in quick succession, WROR, WNFT, WBPS, WAMG and WTTT. Current owner Salem Communications acquired 1150 in 2003, and in 2008 the station acquired its current calls, WWDJ, in a swap with Salem’s AM 970 in Hackensack, New Jersey.

(If you’re scoring at home, that’s 11 callsigns on one frequency, a record for Boston AM and near the top nationwide.)

Today, WWDJ on 1150 is leased to a Spanish-language religious broadcaster, Radio Luz. Its transmitter facility, which once filled this entire building, now occupies just one small suite on the main floor, where there’s a small shop area, a transmitter room that’s home to a pair of Harris SX-5 transmitters and several racks of equipment, and another small equipment room just behind the transmitters. The rest of the main floor, and some space up above in the attic, is leased out to non-broadcast occupants.

And there’s also another broadcast occupant in this building these days. In 2003, the former WSRO (1470 Marlborough) moved some 25 miles east into the Boston market, taking on a new city of license of Watertown and new calls of WAZN, and diplexing off the three 1150 towers with 1400 watts by day and 3400 watts at night. If WWDJ’s signal is somewhat challenged these days, WAZN’s is even more so: in order to protect other stations on the region’s crowded dial, such as WSAR 1480 in Fall River and WXBR 1460 in Brockton, WAZN aims most of its daytime power northwest, away from Boston, with a smaller lobe aimed southeast down Route 2 toward the big city. By night, WAZN is much better into the city, with most of that 3400-watt signal pointed right into Boston.

WAZN’s transmitter and phasor both sit down in the basement, where WWDJ’s current phasor also sits. Because of the sloping ground here, this is a two-story building at the rear, so the basement opens right onto the catwalk that leads out to the AM array – and out to where the FM used to be. Today, that big old FM tower sits mostly empty; like the AM towers, it’s owned by American Tower, which acquired this site when its former sister company American Radio Systems bought 1150, then WNFT, back in 1997. (Within months, ARS merged with CBS, creating a Boston cluster that would have been over the cap; 1150 went into trust and was never operated as part of the CBS Boston group.)

And that leaves us with one funny story to share before we leave this site: when ARS took over WNFT, it flipped from a simulcast of Greater Media’s WMJX (106.7) to a simulcast of then-ARS-owned WAAF (107.3)…well, most of the time. But every once in a while, while flipping past 1150 at night, your editor (and others) would notice that other stations were instead being simulcast. It turned out the cleaning crew out at the transmitter site was to blame: they’d go into the transmitter room, hear loud rock music blaring from the speakers, and tune the radio to something softer, never realizing that the radio dial they were spinning was on the tuner feeding the AM transmitter!

Thanks to Salem’s Frank Kelley for the tour!

It’s that time of year! We’re now shipping the all new Tower Site Calendar 2013 fromthe all new Fybush.com store! Order now and be one of the first to have your copy…why wait? (We’ve also got the very last FM Atlas copies available for sale, and the new edition of the National Radio Club’s AM Log.)