NERW Extra: Tower Down in Maine

It’s one of the most terrifying things that can happen to a broadcast engineer – the station goes off the air, hitting “power up” on the remote control doesn’t work, and so it’s off to the transmitter site to find, well, this: 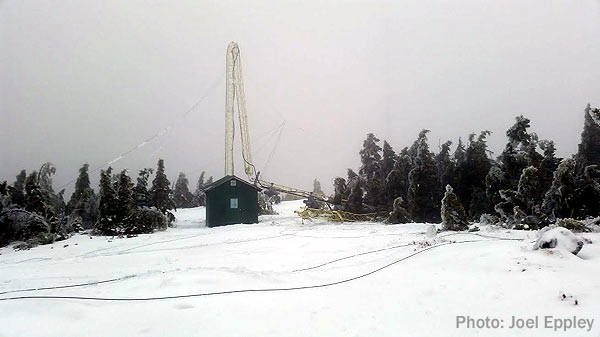 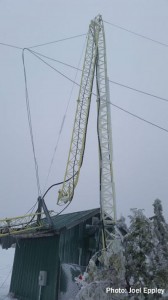 That is – or rather, was – the 200-foot tower of WMDR-FM (88.9 Oakland ME), which collapsed Wednesday morning in a windstorm atop Streaked Mountain, just east of Paris, Maine, and this was a scary day for engineer Joel Eppley. He tells NERW that conditions were so foggy that after hiking up the icy hill past trees that blocked the road, he still couldn’t see the bent-over tower until he was practically atop it. 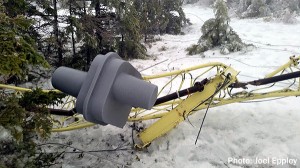 Eppley says the custom 10-bay Shively directional antenna had been put into service less than a year ago, and that station owner Light of Life Ministries doesn’t have an auxiliary site in service for the 100 kW/1282′ C0 signal that serves much of western Maine.

For now, “God’s Country 88.9” is off the air while Eppley works out a plan to get it back in service, at least at reduced power. The tower collapsed within a tight 50-foot radius, as it was designed to do, and the transmitter shack appears relatively undamaged, but the big challenge now for the station is a basic one: clearing the road so that there’s any kind of vehicle access to the site at all.

On a tight budget, Light of Life is looking for a replacement tower – if you’re in the region and can help Joel, let us know and we’ll make the connection. (In the meantime, Eppley’s at least breathing a sigh of relief that the rest of the stations along WMDR’s network are now fed by an Internet feed instead of directly off the air, so only two small translators are off the air while the main signal is silent.)

We’ll have an update on WMDR’s situation in Monday’s NERW.