*It’s hard to believe that it’s been more than 19 years since we pulled up roots from New England, but last week at least gave us the chance to spend some quality time in our old stomping grounds.

And what a joy it was to stop in and see some friends who are doing low-power FM in ways that ought to make the movement proud.

You’ll see WBNH (105.1 Bedford, NEW HAMPSHIRE) in more detail in an upcoming Tower Site of the Week a few months down the road…and when you do, you’ll see how our friend (and fellow Western New Yorker) Harry Kozlowski is working with the community access channel and town leadership in that Manchester suburb to provide something much more than just a loop of music to fill time between occasional emergency announcements.

And then there’s Haverhill, MASSACHUSETTS, where Tim Coco’s many years of work to bring local radio back to that struggling city are finally paying off. On Wednesday, Tim and his crew from WHAV.net filled a banquet hall to honor Haverhill’s radio legacy and raise money for the impending FM launch of WHAV-LP (97.9). 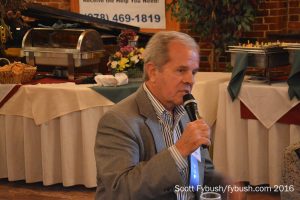 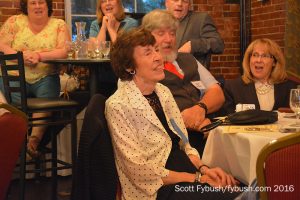 A few stars couldn’t be there – Bob Clinkscales, who signed WHAV-FM on the air in 1959, was sidelined by health issues, and Ed Johnson, the longest-running personality at the old WHAV, was represented by his widow, Pat (left).

Some of the night’s stars only passed through Haverhill briefly – LaPierre recounted how he was fired just a few weeks into his WHAV news stint when he read an obituary without fact-checking to make sure the subject was really dead – while others spent many years on the air in the Merrimack Valley.  (You can read more of their tales at the WHAV.net coverage of the event.) 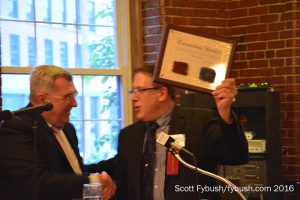 What impressed us most, though, was everyone else who turned out to support Coco and his long fight to go from webstream to a real live FM broadcast. Haverhill mayor James Fiorentini (right) was on hand to salute Coco for his work, and most of the city council showed up as well. And here’s what we noticed: it was more than just a ceremonial appearance for those local leaders. In a community that lost its daily newspaper more than a decade ago, local news still matters, and the WHAV crew has already started to make a name for itself with their online coverage.

As successful as they’ve been with their stream, though, several speakers on Wednesday echoed the same point: being on the air still matters, and WHAV on 97.9 will be an important next step to restore local radio to a city that needs it. Coco almost had the new FM signal on the air in time for the event, and he’s expecting to get it up and running any day now. We’ll keep you posted, and in the meantime, we salute Tim and his crew and all the WHAV alumni for all the support they’re giving to show how LPFM works when it’s done right.

*South of Boston, Ed Perry has found a new transmitter site for WATD (1460 Brockton), the former WBET/WXBR that he bought last year. 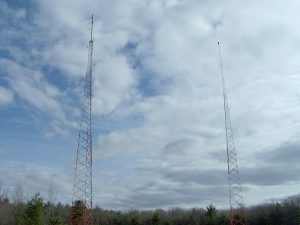 The purchase didn’t include WBET’s now-demolished two-tower transmitter site (right) tucked in between Walnut Street and Route 24 in West Bridgewater, so Perry had to go looking for a replacement location. That turned out to be just to the west across 24 on Manley Street in Easton, where Perry will put up one tower for 5000 watt day/30 watt night nondirectional operation, instead of the 5000/1000 watt DA-N operation 1460 had at its old site.

*The University of Massachusetts continues its translator sell-off; this time, it’s unbuilt W250BV (97.9 Pittsfield) that’s headed to a new home, as Pamal pays $70,000 to relocate the translator across state lines to rebroadcast WGHQ (920 Kingston). 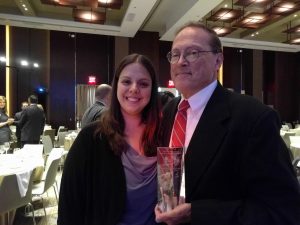 *The NEW YORK State Broadcasters Association inducted its latest Hall of Fame members at a Friday ceremony, including big New York City names John Sterling and Suzyn Waldman of the Yankees and Janice Huff of WNBC. It was a two-fer for the Albany market: 40-plus year WRGB (Channel 6) veteran Liz Bishop, who stayed put in the market, and Chris Jansing, who was Chris Kapostasy at WNYT (Channel 13) before joining NBC News in 1998.

And then there’s Dan Palmer, who’s just as big a star in his local market of Dunkirk/Fredonia, where he’s been morning man, sports announcer and mentor at WDOE (1410) since 1975. (Photo of Palmer and his daughter courtesy Juan Vazquez of WXXI, who was one of Palmer’s proteges.)

*In one of the least surprising political developments of the season upstate, former WROC-TV (Channel 8) anchor Rachel Barnhart is now officially a candidate for a New York State Assembly seat in the Rochester area, challenging incumbent Harry Bronson in the upcoming Democratic primary. If she wins, she’ll join former WHEC-TV (Channel 10) anchor Rich Funke in Albany, where he’s running for a second term in the state Senate. Barnhart’s former 4 PM anchor shift is now being filled by former WROC sports director John Kucko now that Thad Brown has taken over as sports director.

Also in Rochester, Alicia Tyler is outbound from Stephens’ WZNE (94.1 Brighton), headed to Cumulus and KFOG (104.5) in San Francisco to become music director and an on-air jock effective next week.

Out on Long Island, Hudson Valley Public Radio has signed on new translator W254CX (98.7 Redwood), which relays WLNG (92.1 Sag Harbor) for now. The translator made a last-minute move from 98.5 to 98.7 before signing on. Another Long Island translator, W233BX (94.5 Flanders), is part of a three-station sale from Juan Alberto Ayala to Texas-based Elohim Media Group. It’s paying $300,000 for W233BX along with translators in San Bernardino, California and Midland, Texas. W233BX relays “Faith FM” WEGQ (91.7 Quogue).

Radio People on the Move in New York City: John Mingione, late of Cox Media on Long Island, is taking his “Online” nickname to WPLJ (95.5), where he’s now “street ranger and video vigilante” for the Todd & Jayde morning show. Mingione has plenty of morning experience, having been part of the morning show at Cox’s WBLI (106.1). 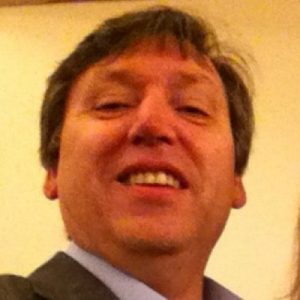 In Buffalo, the agenda for pretty much everyone’s morning news was set for years by WBEN (930) overnight producer/newsman Tom Connolly. The Buffalo State alumnus was music director at college station WBNY (91.3) in the early 1980s, then worked at WYRK (106.5) before joining WBEN, where he often worked seven nights a week. Connolly had been suffering from renal cell carcinoma that forced him off the air last winter; he was 57 when he died June 5.

*In Kennebunk, MAINE, Regional School Unit RSU 21 has had its CP for a new LPFM on 104.1 cancelled.

*Another PENNSYLVANIA AM station is getting an FM translator. Forever is paying Vic Michaels’ Cedar Cove Broadcasting $40,000 for W208BU (89.5 Berwick), which will move to a commercial-band channel and then be relocated to Hanover to become an FM relay for Forever’s recently-purchased WHVR (1280 Hanover). 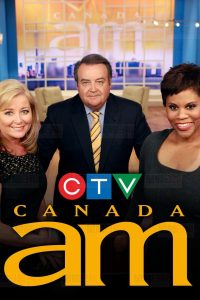 *In CANADA, CTV didn’t take long to announce a replacement for “Canada AM” after abruptly canceling the venerable morning show. “Your Morning” will originate from the old CityTV building at 299 Queen Street West instead of the CTV facility in Scarborough; when it launches in late summer, it will be hosted by current “eTalk” host Ben Mulroney and ex-CBC anchor Anne-Marie Mediwake.

In Montreal, Dave Fisher is leaving his weekend morning post at CJAD (800), where he’s been dominating the Anglo radio dial with his “Dave’s World” show. Fisher hasn’t set a definite date for his departure from CJAD, but he’ll wrap up 32 years there sometime later this summer.

The Montreal FM dial will get even more crowded now that Centre Communautaire Bon Courage has been granted a new 50-watt/11.6 meter signal on 90.7. Canadian Radio News reports the format will be mostly “French language programming with some English, Spanish, and Creole broadcasts mixed in.”

*And how about a bit more Baseball on the Radio, now that the short-season A New York-Penn League has started its season?

Here in upstate New York, it’s been touch-and-go for the Batavia Muckdogs, who were rumored to be in their last season before moving to Maryland. That move was quashed (for now) by territorial opposition down there, and so the ‘Dogs continue on in Batavia with radio coverage on WBTA (1490) and its FM translator at 100.1. Down the Thruway, the Auburn Doubledays have their Thursday/Friday/Saturday schedule – 38 games in all – on a new radio deal with WAUB (1590) and its translator at 98.1. Michael Tricario is spending the summer as the voice of the Doubledays and as the team’s media director before returning to Syracuse University for his senior year. (How cool a summer job is that?)

There’s no broadcast radio for the Brooklyn Cyclones, Staten Island Yankees, Tri-City Valley Cats or the Hudson Valley Renegades – nor, it appears, for the Connecticut Tigers, who seem to have gone web-only after several years on WICH (1310 Norwich).

In Massachusetts, the Lowell Spinners stay put on WCAP (980), the team’s longtime radio home. The Vermont Lake Monsters have a similarly long relationship with WEAV (960 Plattsburgh NY), which will be home to George Commo’s call of at least 51 games this season.

And in Pennsylvania, the Williamsport Crosscutters will be on “ESPN Williamsport” (WLYC 1050/WEJS 1600 and translators), while the State College Spikes move from WZWW (3WZ 95.3) to Forever’s WRSC (1390) this season, with 11-season veteran Steve Jones and 9-season veteran Jon Putnam calling all 76 games.