*It’s another one of those weeks when we lead off by saying farewell, starting with one of the chief architects of NEW YORK City’s FM dial in the 1970s and 1980s.

Larry Berger, who became program director of WPLJ (95.5) in 1974 and stayed in that post through the station’s transition a decade later from album rock to top-40, died September 25, though the news of his death only became public last week.

Before hitting the big time in New York, Berger started in radio in NEW JERSEY as a student at Rutgers University, working down the street at WCTC (1450 New Brunswick). After graduating in 1966, he went to WWRL (1600) in Queens as music director, then got his first PD gig in 1968 at WALL (1340) in Middletown, one of the many huge talents who passed through that small station.

In 1973, ABC hired Berger to program WRIF (101.1) in Detroit, one of its chain of FM rock stations – and that led him back to New York and sister station WPLJ in 1974, just in time to create some radio magic. In a tight battle against RKO’s 99X (WXLO 98.7) and Metromedia’s WNEW-FM (102.7), Berger’s version of WPLJ distinguished itself through its personalities, its live performances, Berger’s own call-in show – and through the very distinctive audio processing that Berger helped to craft. 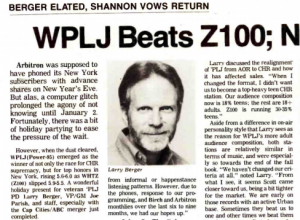 WPLJ outlived 99X, survived the disco revolution of the late 1970s, and kept playing music after its huge AM sister, WABC (770), flipped to talk in 1982. A year later, in June 1983, Berger observed the rise of MTV, the decline of the album rock format and the new competition from upstart rocker WAPP (103.5), making the difficult decision to transition WPLJ away from rock to top-40 in the space of just a week.

Berger’s new top-40 WPLJ quickly found itself in the heat of a format war when WHTZ (Z100) made its splashy debut two months later. And while it’s WHTZ that’s probably better remembered now, having stayed in the format for 35 years, “Power 95” was a fierce competitor, eventually even dropping the WPLJ calls for WWPR.

Berger left New York and ABC in 1988, settling in San Francisco, where he programmed KIOI and KSOL/KSRY before starting a consulting business in his retirement years. He remained a frequent contributor to radio message boards, sharing stories of his long career and his many triumphs.

Details of his death and memorial plans remain incomplete; we’ll let you know as we hear more.

*When Hank Greenwald died last Monday at 83, he was most remembered – and rightly so – for spending the better part of two decades in the radio booth for the San Francisco Giants. But long before he ever joined the crew at Candlestick Park, Greenwald called upstate New York home, falling in love with baseball on the radio as a boy in Rochester and then heading east to Syracuse University.

At SU in the 1950s, Greenwald was the first of a long line of sports broadcasters to launch big-time careers, starting with college football, then moving to the old WWBZ in Vineland, NEW JERSEY as a jack-of-all-trades announcer before returning to Syracuse and WOLF (1490). While in Syracuse, Greenwald called minor-league baseball and NBA basketball games (the old Syracuse Nationals) for a few years, went to Honolulu, and then ended up on the West Coast for most of his time on the air.

He did come back east, however, to spend two seasons in 1987-88 as the radio voice of the Yankees on WABC (770), handing that role off to John Sterling and returning to the Giants for their pennant-winning 1989 season.

Greenwald retired from the Giants booth in 1996, briefly returning to the air across the bay in the Oakland A’s TV booth in 2004-05 before stepping away for good.

*Here in Rochester, there’s a new signal on the air. W261DR (100.1 Victor) is a second translator for the Finger Lakes Radio Group’s WCGR (1550 Canandaigua), reaching the city’s east side from up on the Baker Hill tower farm on the Ontario-Monroe county line. WCGR and its existing Bristol Mountain translator at 104.5 had been rebroadcasting classic rock “Wall” from WLLW (101.7 Geneva), but on Friday they began stunting with a very broad variety hits playlist as “The Cougar.” What’s coming to those signals for good? Stay tuned…

And a familiar local voice is back on the radio here. Megan Carter had been part of the “Team PXY” morning show at Entercom’s WPXY (97.9) until April. Now she’s doing afternoons across town at iHeart’s “Kiss” WKGS (106.7), displacing the syndicated Ryan Seacrest to middays there. (Brooksie had been tracking middays and will now be focused solely on his afternoon shift at “Mix 100.5,” WDVI.)

*Amidst all the sad news nationally over the weekend, there was more sad news from within our industry, as we learned of the death Saturday of northern NEW HAMPSHIRE radio owner Barry Lunderville. 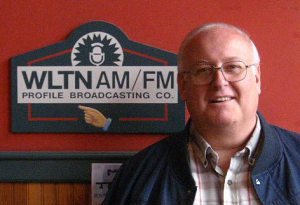 A graduate of the old Grahm Junior College, Lunderville’s on-air career included stations such as WJDA in Quincy and the former WJIB-FM in Boston, as well as six years as a news anchor on WEEI (590) and then a few years as a talk host on WHDH (850) – but he’s probably best remembered for “Radio New England Magazine,” which he produced, hosted and syndicated from 1983 until 1993, growing at one point to a 90-station network.

In later years, Lunderville divided his time between New Hampshire and a winter home in southwest Florida, where he was part of a tight-knit group of New England radio folks.

Memorial plans were not yet available as of Sunday night; we’ll let you know as we learn more.

*Elsewhere in New Hampshire (and MAINE), Massimo Rosati has been promoted to president of Binnie Media. Rosati has been with the company for three years, serving as executive vice president.

*As we try to catch up on sleep after that wild 18-inning World Series marathon Friday night and Saturday morning, we send our very best wishes to the dean of MASSACHUSETTS radio sports reporters. As thrilling as it was to watch the Red Sox take their fourth championship of the century, it wasn’t quite the same without Jonny Miller, who’s covered the Red Sox for WBZ (1030) for more than three decades. He took ill on his flight to Los Angeles Thursday. Instead of reporting on the game three marathon from Dodger Stadium, Miller ended up watching from a hospital bed in Denver, where his flight was diverted. Initial reports are that Miller suffered a stroke – but that he’s on the mend and in good spirits.

*In western PENNSYLVANIA, Matt Lightner is building a nice little radio empire in the Altoona-Johnstown area. He’s currently stunting on WYUP (1400 Loretto), formerly WWGE, which has added a new translator (W296ED 107.1) in Altoona, with a permanent format set to launch Thursday afternoon at 5. And, yup, WYUP will have a sister station now that Lightner has signed a deal with the Greater Johnstown School District to operate its WCRO (1230 Johnstown) under an LMA. “The Voice of the Trojans” will continue to have a studio that students can use to participate in its programming, and Lightner says its FM translator CP at 102.9 could get built out before winter sets in. Lightner’s initial deal with the school district runs for one year, renewable in one-year increments.

*It’s hard to imagine radio in CANADA without Roger Ashby. The CHUM-FM (104.5 Toronto) morning man has been with the station since he came there from CKOC in Hamilton in 1969, first down the hall at sister station CHUM (1050) and then on mornings on FM since 1985.

When CHUM-FM added Jamar McNeil to the “Roger and Marilyn” morning show earlier this year, speculation immediately began to swirl that Ashby would be exiting, but it wasn’t made official until last week, when he made an on-air announcement at the end of Thursday’s show. CHUM-FM says it will say farewell to Ashby with a special live broadcast from the Sheraton Centre’s ballroom December 5.

“I’ll miss the people, but on the other hand, I am not fully retiring, I’ll be doing other things and hopefully it will bring me into the station a couple of days a week,” Ashby told the Toronto Star, adding that he’ll be happy to not have to wake up at 4 AM.

After Ashby heads off to retirement, Marilyn Denis will continue to co-host mornings with McNeil – and it’s worth noting that with 32 years on the CHUM-FM morning show, she’ll become the longest-running Toronto radio host still on the air. 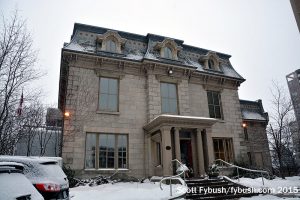 *In Hamilton, Channel Zero’s CHCH (Channel 11) has taken another big step forward in its move to new quarters. After more than half a century at 163 Jackson Street West, first in an historic mansion and later in a more modern studio addition behind the mansion, CHCH plans to move in 2021 into a new, smaller purpose-built building at 4 Innovation Drive in suburban Flamborough.

Construction on the new site will start next year; once it’s finished, the current studio site will be replaced by two high-rise glass condo towers, keeping the mansion out front.

*There’s new programming starting today at CKNT (960 Mississauga), including the surprise return of a familiar Toronto-area voice. “Sauga 960” will bring Mike Bullard back to the airwaves as half of “The Gateway with Mike Bullard and Lawrence Morganstern,” from 4-7 PM. Marc Patrone will be on from 9-11 AM, then Norm Murray and Martha Kruk with “The Mid Day Show,” followed at 2 by “Foster and Decker,” then Bullard and Morganstern.

*And here’s the most obscure story you’re going to read all week, but an interesting one nonetheless. Way up north in the Atikamekw native territory in northwestern Quebec, Radio-Canada is shifting three of its Ici Premiere rebroadcast transmitters to a different local feed. CBFG-FM-3 (92.3 Wemotaci), CBFA-FM-2 (92.9 Opitciwan) and CBFA-FM-1 (103.5 Manawan) had been fed by CBFG (103.5 Chisasibi), which carries a program feed that mixes Montreal local shows with some Cree-language programming.

Chiefs in those three communities asked to have their transmitters switched to the feed from CBF-8 (96.5 Trois-Rivières), saying it would be more relevant to their areas. Last Thursday, the “360 PM” local afternoon show from Trois-Rivières traveled to the Atikamekw to originate their broadcast from the community center up there.