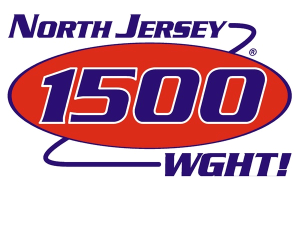 *If small-market AM radio is past its heyday, it’s far from dead, at least.

That’s the takeaway from two developments last week in northern NEW JERSEY, where one station was just days away from losing its license and another lost its transmitter site but is hoping to stay alive with a new antenna.

It’s been a year now since former owner John Silliman took WGHT (1500 Pompton Lakes) dark after several decades of fun small-town radio, full of local news and oldies. Silliman donated WGHT to the borough of Pompton Lakes, which had been maintaining strict (you’ll forgive us) radio silence about its plans for the little daytime-only signal. (The borough did at least keep up with the FCC’s filing deadlines to get a translator construction permit, W252ED (98.3), which was granted in May but has not yet made it to air.)

With WGHT’s silent STA set to expire this coming Friday, it wasn’t clear whether the borough would get the signal back on the air – at least until late last week, when listeners to Bud Williamson’s WALL (1340) up in Middletown, New York started to hear promos announcing that WALL was adding a simulcast on 1500 in north Jersey.

WGHT returned to the air Thursday afternoon with the simulcast, which Williamson tells NERW is only temporary.

“The borough has been good to work with,” he says – and word is that at some point, new permanent programming (and perhaps a buyer) will be on the way to WGHT. Will the FM translator, once it’s built, help overcome the limited daytime-only AM signal? (On Thursday, it had to sign off less than an hour after it signed on!)

*An hour to the south, give or take traffic, Multicultural Broadcasting (MRBI) has been operating WJDM (1530 Elizabeth) under STA for almost three years since losing the lease on the station’s longtime licensed site in town. MRBI was granted a construction permit to give WJDM a big boost in power, jumping from 1000 watts to 10 kilowatts with a directional signal triplexed with co-owned WPAT (930 Paterson) and tenant WNSW (1430 Newark) at the WPAT site in Clifton – but it tells the FCC the cost of building out that triplex would be prohibitive, especially since it’s still not clear whether WJDM can remain on the air permanently. (That goes back to the debacle that is the FCC’s expanded-band proceeding; WJDM spawned what’s now WWRU 1660 Jersey City and was supposed to have gone silent five years after WWRU signed on in 1996, but 22 years later, the Commission still hasn’t pulled the trigger to force one of the paired stations to go silent.) 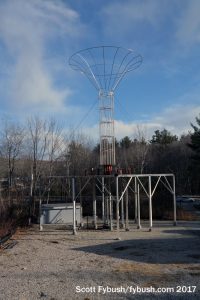 What to do? WJDM applied last week to return home to Elizabeth, using a tower on the roof of a local church, the Iglesia de Evangelizacion Misionera Jovenes Cristianos de Marshall. A rooftop tower for an AM is possible, because WJDM is proposing to become the second station licensed with the High Efficiency Broadband Antenna system, or HEBA.

There’s been a HEBA quietly operating in test mode, and more recently fully licensed, at WGFP (940) in Webster, MASSACHUSETTS (shown at left), and we’ll be telling you more about it in the weeks to come over on Tower Site of the Week. In a nutshell, it’s a short (just 7 meters tall) stocky cone mounted on a big copper plate that will sit atop the church building – and from that new site, WJDM plans to run 360 watts, daytime-only, nearly replicating the coverage it had from a standard tower at 1000 watts.

*Elsewhere in NEW JERSEY, there are Radio People on the Move:at WPST (94.5 Trenton), Kayla Thomas is the new night jock – and also the new host of the CHR version of the syndicated “PopCrush Nights,” where she replaces Lisa Paige (she’s still hosting the hot AC version) of the show. Thomas comes to WPST from Roanoke, where she’d been doing middays on WXLK. Down at Townsquare’s WSJO (104.9 Egg Harbor Township), Chelsea Corrine moves to middays from sister station WPUR (107.3), displacing Heather DeLuca to the afternoon shift.

In the early days of conservative talk radio, Les Kinsolving was one of the pioneers, building a career that included stops at WOR (710) in New York and WWDB (96.5) in Philadelphia and then continued for decades at Baltimore’s WCBM (680). Kinsolving died Dec. 4 at 90.

*Meanwhile in PENNSYLVANIA, there’s news from another AM that’s been fighting to resume broadcasting. Philadelphia’s WNWR (1540) is back on the air with regional Mexican programming, but not at full power; it’s asked the FCC for an STA to operate with 10 kW daytime instead of its usual 50 kW while it tries to work out some issues with its transmitter.

At the other end of the state, WZTE (1530) returned to the air last week, stunting with patriotic music as “Freedom 1530.” The little AM signal is the old WHYP from North East, more recently known as WMCE until former owner Mercyhurst University sold the license to religious WCTL-FM (106.3), which moved 1530 to a new site off Route 8 just north of Union City. From there, the new 1530 signal runs 4800 watts during the day, 250 watts critical hours – but the main reason for getting it on the air from Union City is to allow the 106.3 FM signal to move from North East into Erie, a move that will happen in the next few months. (WZTE, meanwhile, has a CP for a translator on 103.3 that will also serve the Union City area.)

*In an otherwise quiet week here in upstate NEW YORK, there’s word of one station sale on the way: Arizona-based attorney Timothy Stratton will be buying WYLF (850 Penn Yan) from Jeff Pearce’s MB Communications, for a reported $285,000, including WYLF’s new translator at 93.9.

*Back in New England, one of VERMONT‘s bigger radio groups is realigning its leadership, as Joann Cyr moves up from general sales manager to market manager at Vox AM/FM’s Burlington cluster ahead of a January closing on its purchase of Sison Broadcasting’s WXXX (95.5) and WVMT (620). Dave Goddette will move up from digital sales manager to sales manager at the cluster. Jamie Dennis will move from operations manager to director of IT for all of Vox’s stations in both Vermont and Indiana, while WXXX PD Ben Hamilton takes the OM role at the Burlington cluster (WVMT, WXXX, plus “Star 92.9” WEZF, sports stations WCPV and WEAV and rhythmic top 40 WXZO 96.7.)

(Ken Barlow has been serving as Burlington market manager as well as COO of the entire Vox operation, and he’ll now be focusing more on the other markets outside Burlington as he hands the day-to-day reins to Cyr.)

And we expect more changes at Vox as it absorbs the Sison stations. After veteran WVMT morning men Ernie Farrar and Charlie Papillo depart next week, look for personnel shifts to fill that slot, as well as the eventual move of the WVMT/Triple-X studios from the WVMT transmitter site off Mallets Bay Avenue to the Vox facility at Fort Ethan Allen. 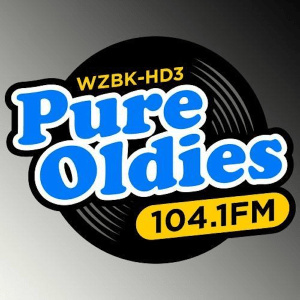 *Across the border, CANADA‘s regulators had a mixed message last week for broadcasters proposing new signals in and around Quebec City.

For Evanov Broadcasting, it was a lump of coal: its proposal for a new English-language station on 105.7 in Quebec City itself, carrying the company’s soft AC “Jewel” brand, was rejected, as was a competing 105.7 application from Gilles Lapointe and Nelson Sergerie. The French-language broadcasters in Quebec were concerned that an English-language station would have greater freedom to play English-language hits without being forced to play at least 65% French-language music; what’s more, they told the CRTC, radio revenues in the market are on the decline and the addition of any new player would further harm the overall business climate. Evanov, which also tried and failed to get a new Quebec City station in 2010, will have to wait two years before it can again apply there. (Read more analysis on the CRTC’s decision from Steve Faguy, here.)

Meanwhile, though, the CRTC did agree to open a window for applications in two outlying markets. In Portneuf, Michel Lambert had applied for 88.7 (a second station, technically, for the area, though existing CHXX 100.9 Donnacona has moved its operations into Quebec City); in Saint-Marie, Sylvain Chamberland’s Attraction Radio (newly renamed Arsenal Radio) applied for a new 105.3 to go with its existing CHEQ (“O 101.3”). Those applications will now be subject to competing proposals whenever the CRTC opens the floodgates, likely early in 2019.