(Monday midday update: iHeart in Boston made another move at noon today, pulling the plug on the R&B format at WKAF 97.7 and replacing “97-7 the Beat” with the company’s “Rumba” Spanish hits format. Much more in the next NERW…)

*Longevity in radio is a rare and special thing, isn’t it? Only a handful of broadcasters get to reach the 40-year mark, especially with a single station. It takes a lot of luck, of course, to land the right combination of stable format and ownership – and it takes a lot of talent, not only to sound good at the start of your career but to know how to adapt to a changing industry and a changing listener base as time rolls on.

For decades, Matt Siegel of Boston’s WXKS-FM (Kiss 108) has been one of the paragons of radio longevity, surviving and thriving as the star of “Matty in the Morning” while other morning radio voices – even legendary ones – came and went around him. A 71-year-old jock still playing today’s hits? It’s rare, but not impossible, and Siegel managed to stay relatable to audiences less than half his age with a distinct lack of major controversy… right up until Wednesday morning. 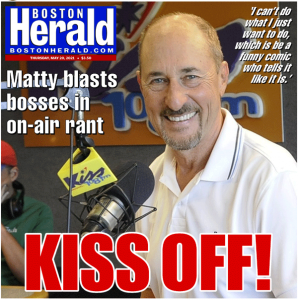 That, of course, is when Siegel – in his own words – “snapped” over a story that’s not particularly uncommon in today’s music scene, the announcement by Demi Lovato that they’ve become non-binary. As Siegel began riffing on the story, calling “the whole binary thing” a “joke,” managers at the iHeart-owned station (which had booked Lovato as one of the star artists at its upcoming awards show) began telling him to stop, and it got ugly fast: Siegel abruptly told his audience he was “ending my portion of the radio show.”

“I love my listeners … and it’s been a hell of a run, but I think it’s coming to an end,” Siegel said before leaving the studio. The rest of Wednesday morning’s show ran jockless as rumors swirled that Siegel’s departure was permanent, but his absence turned out to be brief: with a multi-million dollar salary at stake, Siegel was back on the air Thursday, though still edgy about Wednesday’s outburst and its fallout.

The Wednesday show, unsurprisingly, wasn’t posted as a podcast on the Kiss website, which drew Siegel’s ire – not just against iHeart (“I guess maybe iHeart doesn’t have my back. Maybe I was right yesterday”) but against one of his sidekicks, Rebekah “Bex” Maroun, who tried to explain to Siegel that the decision to not post the audio came from several levels up in management.

What happens now? Some of it is grimly predictable: the defense from some corners (largely outside the Kiss target demographic) echoing Siegel’s Wednesday complaints that “woke” culture is keeping him from being “a funny comic, telling it like it is about what he’s thinking.” It’s true, of course, that Siegel probably can’t say some of the things he could have said at the start of his career, or even a decade ago – but it’s equally true that the world has changed, and that the expectations and values of the younger audience Kiss hopes to reach have shifted. That’s true not only of social issues like the gender identity that tripped him up, but also of issues of workplace equity, and there’s a big chunk of would-be Kiss listeners who aren’t going to react well to the bullying tone in Siegel’s on-air beratement of Maroun. (Read on for another story of how changing workplace values appear to have ended a long career in another big market last week.)

Can Siegel find a way to mend those fences and adapt so he can stick around for the last act of his long career and go out as the respected veteran he’s always been? Or will his ire keep growing – and will iHeart management come to see him as more of a liability to the Kiss audience and format than an asset? It’s not the way anyone, least of all Siegel, probably wanted this to end, nor is it in iHeart’s best interests to lose him, without any obvious successor in the wings. (Even in an age of syndicated talent, the company no doubt realizes that Kiss is more successful with a strong local morning show than it would be if, say, it plugged in the New York-based Elvis Duran.)