*If you’re a competitive top-tier university, what amenities do you need to attract the best students? A winning football team? Renovated dorms? Gourmet food?

For many years, one of the checkboxes that every big Ivy League school needed to tick off was the one marked “school radio station.” At many of those schools, the radio operation was more than just a hobby club – when Cornell owned Ithaca’s WHCU, it was a fully commercial, professionally-run station serving the wider Ithaca community, for instance.

Over the last few decades, though, university leaders at all levels have noticed the same trend: while students flocked to college radio stations well into the 1980s and 1990s, today’s students often don’t find the college radio scene as appealing or as essential. Those huge record libraries that attracted the musical obsessives? They’re available to anyone with a Spotify account or a YouTube login. Want to do a talk show for other students to hear? You can start a podcast almost on a whim with a hundred dollars’ worth of equipment, or become a campus TikTok star with even less.

Even before the pandemic, the trend line was obvious: Cornell long ago sold WHCU to a commercial operator (though another station, WVBR, remains as a commercial facility owned by an independent company staffed and managed by Cornell students and alumni); at Yale, the independent Yale Broadcasting Company has leased out WYBC and WYBC-FM to separate outside operators for years – and Brown Broadcasting Service, the independent commercial operation based just off that campus in Providence, cashed out its big commercial FM signal a few years ago, becoming streaming-only. 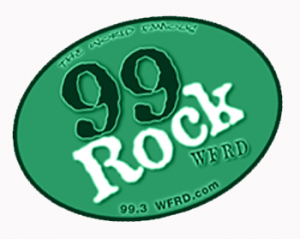 Things move a little more slowly in rural NEW HAMPSHIRE, but move they do – and now WFRD (99.3 Hanover) is poised to exit Ivy League ownership after more than 45 years as a student-run, commercial FM signal.

The announcement from Dartmouth College struck all the usual notes – “The station has been operating at a financial loss for a number of years,” the college said. “In addition, student involvement in the commercial station has waned over the past decade.”

As a result, Dartmouth is listing the 99.3 signal, a 6 kW/100 m class A facility, with a broker, with plans to use the proceeds from the sale to strengthen the rest of the Dartmouth Broadcasting operation. That’s “WDCR,” the online successor to Dartmouth’s original commercial AM station, WDCR (1340 Hanover). For many years after 99.3 lit up on the FM dial in 1976, the two stations ran in tandem – WFRD was the more professional, more commercially-formatted rock station on FM, while WDCR provided a home for more freeform student experimentation. Facing the need for expensive tower work, WDCR surrendered its broadcast license in 2010 and now operates as a streaming-only operation under the Office of Student Life, which will continue once WFRD is sold.

Dartmouth says one staff position will be eliminated, and that it will work to provide internship and career opportunities for students interested in a career in radio.

Who’ll buy the station? Dartmouth may find it waited a little too long – perpetual buyer EMF Broadcasting already is in the Upper Valley with the recent purchase of what’s now WZKC 103.1, and New Hampshire Public Radio and Vermont Public Radio have strong signals there as well. Great Eastern is the dominant commercial player in the region, but could it fit another signal under the market cap? We’ll be watching.

(As for the rest of the Ivies? WHRB at Harvard, WPRB at Princeton and WVBR, as noted above, are all operated by companies independent of the respective universities, and all seem fairly stable for now. Columbia’s WKCR and Penn’s WXPN are noncommercial licenses that are successful operations, with WXPN operated as an entirely professional public radio outlet. WYBC at Yale is leased out, and of course WBRU at Brown has already sold its big FM facility.)

*It’s not just the Ivies rethinking the future of campus-licensed FM broadcast signals, either. We’ve chronicled several smaller colleges and universities that have unloaded their licenses in recent years, and that number continues to grow. It’s not always a bad thing for the community voices that tend to dominate many campus stations – in central VERMONT, for instance, Goddard College recently completed the transfer of WGDR (91.1 Plainfield)/WGDH (91.7 Hardwick) to a new nonprofit, Central Vermont Community Radio, that will continue the station’s existing programming. In plenty of other cases, though, community and student radio has given way to more network programming, whether religious or big public radio operators, and that’s been a loss for anyone who cares deeply about the kind of quirky independent sound that once thrived on college radio.