*It took four months, but the Cumulus cluster in Buffalo, NEW YORK has made the most obvious move after jettisoning the long-running morning show from classic rock WGRF (97 Rock) back in April. 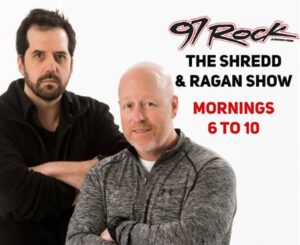 Starting this morning, 97 Rock listeners will once again have a familiar set of market voices handling wakeups: Ted Shredd and Tom Ragan will move across the hall from modern rocker WEDG (103.3 the Edge) to take over the WGRF airshift.

It’s a comfortable conclusion to a problem that started on March 24, when “Morning Bull” co-host Rob Lederman made racist comments on the air, egged on by host Rich “Bull” Gaenzler and co-host Chris Klein (and later posted as part of the show podcast, which also led to the ouster of longtime PD John Hager.)

Another 97 Rock talent, DJ Jickster, had been holding down mornings ever since – at least until Wednesday, when Shredd and Ragan appeared for the on-air announcement of their change.

Shredd and Ragan predate the Edge identity on 103.3, going all the way back to 1989 and the station’s relaunch as WUFX (“the Fox”); they’ve been morning staples since 1994, a year before the station flipped to the Edge. Their pairing has been so enduring that they remained teamed up in the afternoons from 2006 (when they were replaced by Opie and Anthony) until 2012, when they returned to mornings. (Ironically, one of the morning hosts on WEDG in the interim had been Gaenzler.)

While the move solves a problem on the 97 Rock side of the hallway – not to mention giving the aging Shredd and Ragan a more comfortable older demographic with whom they can keep on going for many more years – it creates a new one on the 103.3 side, where Cumulus hasn’t yet said what happens next.

For now, it appears the Edge format stays put, despite persistent rumors that the company has been considering a country format to challenge Townsquare’s dominant WYRK and Audacy’s upstart WLKK. We know Val Townsend, the former WYRK morning co-host (and Edge alumna) who was forced out earlier this year, won’t be going to Cumulus; last week, the Buffalo News‘ Alan Pergament reported that she’s taken a new post teaching communications courses at Medaille College. (Pergament also has more juicy comments from Townsend about the ways in which she says she was targeted by her former co-hosts, and some potent allegations about how she was ignored by Townsquare management when she tried to complain.)

*And there’s another late-breaking Cumulus story: Davey Morris has disappeared from the website of WPRO-FM (92.3) in Providence, RHODE ISLAND, where he started as an intern in 1990 before moving to overnights, then afternoons, as well as becoming the PD of both PRO-FM and sister station WWKX (Hot 106.3). Morris, a Rhode Island Radio Hall of Fame inductee, had also served at one point as corporate CHR program director for Cumulus.