ALBANY – If you’ve been faithfully flipping the pages of the 2022 Tower Site Calendar (still available at the fybush.com store!), you’ve begun reliving the radio events of 1922, the year when radio went from an experimental plaything to an on-the-air reality in city after city.

All through the year, then, we’ll be following along as members of the Class of 2022 celebrate their centennials, starting with two very big entries this week.

It was on February 20, 1922 that General Electric began regular broadcasting over WGY in Schenectady, which is why we spent the weekend in the Capital District listening and watching to its 100th anniversary festivities. 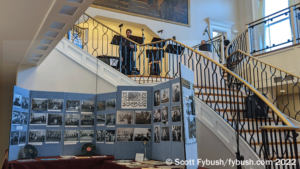 On the air, it started Sunday afternoon at 1 with two talk shows featuring current WGY host Doug “VB” Goudie and former host Joe Gallagher. While the shows were going on from the current iHeart studios in the suburbs, a crowd was gathering at the historic Kenmore Ballroom in downtown Albany, site of early WGY remotes. After looking at historical exhibits, they (and we!) enjoyed a talk on the station’s early history, music from 1922 performed by the Musicians of Ma’alwyck – and then a most entertaining comedy-drama restaging of the events that might have surrounded WGY’s inaugural radio drama from back then, “The Wolf.”

The imaginative retelling was emceed by (and starred) veteran WGY newsman Mike Patrick, along with colleagues Diane Donato, Jillian Shuhart and Chris Warren, along with players from the Schenectady Light Opera Company, and it (along with all the centennial programming) is available on WGY’s website and well worth a listen. 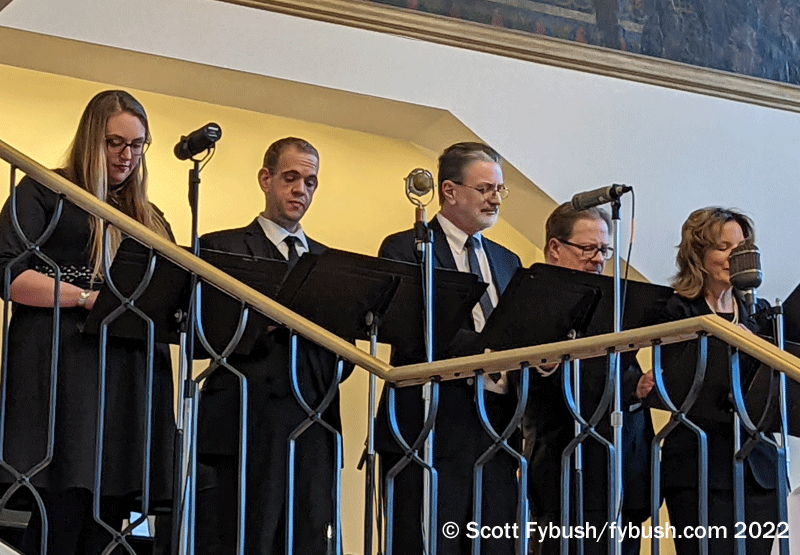 The big day concluded at the actual hour of the first broadcast with one more special talk show, but the promotion will live on for a while longer, with WGY boasting a new vintage-inspired jingle package and lots of imaging marking “100 years of news” and so on – a smart way to try to leverage all that old history while trying to keep today’s news-talk format fresh, too.

*Did we mention the anniversaries are about to start coming hot and heavy? Tuesday marks 100 years for what’s now NEW YORK‘s WOR (710), but when morning hosts Len Berman and Michael Riedel devote a special edition of their show to the anniversary, we’re sure they’ll at least mention that WOR started across the river in NEW JERSEY, where its birth at L. Bamberger and Sons marked the start of a long history of radio stations owned by (and advertising for) department stores.

In what’s coming to seem like standard iHeart fashion, WOR has launched a podcast series about its history, produced by the incomparable Howard Hoffman. It’s also getting an only-in-New York tribute on Wednesday night, when the Empire State Building will be lit up in WOR’s current Mets-inspired logo colors of blue, orange and white. (But only NERW will think to mention to you that Empire was the longtime transmitter site of WOR-FM and WOR-TV, and that WOR-TV even had its studio and master control at Empire for a while. You’re welcome.)

*What’s next? March will bring some forgotten anniversaries of early unsuccessful entries in Rochester (WHQ) and Buffalo (WWT), and perhaps at least some brief mentions from Philadelphia’s WFIL, but it’s really later in the year that the centennials in our region will continue in earnest, and we hope to be there in person for more of them as this milestone year in radio plays out.