*John Derringer has been an institution on Toronto radio for almost forty years, starting at Q107 (CILQ) in 1983, moving to Montreal’s CHOM, returning to Toronto and mornings at CJCL (590 the FAN), and since 2000 back on mornings at Q107. 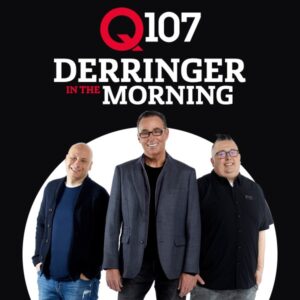 Until last week, that is, when Corus pulled Derringer off the air in the wake of a flood of accusations of bad workplace behavior.

While rumors about Derringer had circulated for years, it took an Instagram post from one of Derringer’s former co-hosts, Jennifer Valentyne, to bring the stories into the open.

“What would you do if a co-worker screamed at you, belittled you, called you names, shut you out, brought you to tears, and then laughed when he told you to cry all you want?,” Valentyne asked, saying she was told any complaints to HR would be resolved in her co-worker’s favor, and so she felt she had no choice until now but to “put up and shut up.”

Valentyne’s post didn’t name the former co-worker she accused of verbal abuse, misogyny, gender discrimination and other workplace offenses including vaping inside the building – but she didn’t need to say Derringer’s name for others to begin opening up about their experiences with Derringer.

Erin Davis, who competed against Derringer for many years at CHFI (98.1), told CTV News that she felt constantly bullied by Derringer’s on-air animosity toward her. So did other former Q107 co-hosts and Corus colleagues, including former AM 640 morning host Supriya Dwivedi, who said in an interview that she recalled seeing Valentyne crying in a bathroom, “visibly shaken,” on many occasions.

Dwivedi and others said Corus was well aware of the accusations against Derringer but did nothing until Valentyne’s video became public. After that, Corus acted quickly: Derringer wasn’t on the air last week, initially without any on-air acknowledgement of his absence. Later in the week, the company said it had hired an outside lawyer to conduct a review of the allegations and of Corus’ response; the Canadian Human Rights Commission is also reviewing the complaints.