NorthEast Radio Watch 11/28/2022: Lighting Up a Big Centennial in Scranton

*It’s an annual tradition in downtown Scranton, PENNSYLVANIA the night before Thanksgiving: thousands of people fill the streets around the corner of Penn Avenue and Biden Street, enjoying a street fair, music, food trucks and, right at the stroke of six, the lighting of the Christmas display that’s strung up and down the tower of WEJL (630) atop the Scranton Times building. 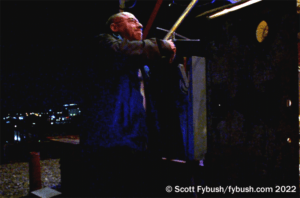 If you watch the TV coverage or read the article in the Times-Tribune the next morning, you’ll learn that “Santa Claus” himself lights the tower at the end of the countdown that’s broadcast live on WEZX (Rock 107) – but here at NERW we can let you in on a little secret. While Santa’s down on the street, it’s chief engineer Kevin Fitzgerald from WEJL and WEZX up at the base of the tower on the roof throwing the actual switch.

And this year, he invited a friend to do the honors – which means it was your editor up there high above Scranton actually lighting up the tower and cueing the fireworks display that started the holiday season in northeast Pennsylvania. It was a thrill indeed, not least because this is a special year for WEJL. 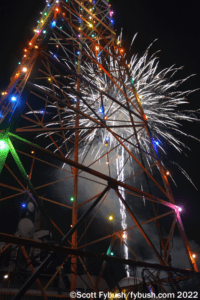 While the Times was hardly the only newspaper to own an early radio station, the Lynett family boasts a unique history: it is, as best we can tell, the only family-owned newspaper/radio combination to have survived an entire century.

After operating WQAN as a noncommercial, shared-time operation from the 1920s until 1950, the station transformed into commercial WEJL and eventually spawned a family-owned broadcast group, Times-Shamrock, that built up a larger cluster in Scranton and expanded to other markets such as Milwaukee and Reno.

Next month, the Lynett-Haggerty family will be honored for their centennial with a Spotlight award from the Pennsylvania Association of Broadcasters, a well-deserved honor for an enduring family media legacy.