*Two big – and surprising – developments greeted the New England media community on this morning after Labor Day: a major TV group merger, and a big name coming to public radio. 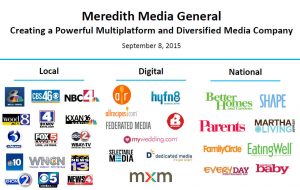 The TV group merger first: Media General, fresh off last year’s merger with LIN, is paying roughly $2.4 billion to acquire Meredith Corp., landing not only Meredith’s 13 TV markets but also its extensive print and digital portfolio of home and lifestyle magazines, including Better Homes and Gardens.

In NERW-land, the deal means some big spinoffs in the adjacent Hartford and Springfield markets, where the combination of Media General’s former LIN stations and Meredith’s stations represents nearly all the players.

In Hartford, the new “Meredith Media General” will have to spin either dominant CBS affiliate WFSB (Channel 3) or the New Haven-based duopoly of ABC affiliate WTNH (Channel 8)/My affiliate WCTX (Channel 59).

In Springfield, the deal affects every commercial station in the market: Media General inherited LIN’s long ownership of dominant NBC affiliate WWLP (Channel 22), which also just lit up CW on 22.2; Meredith, of course, recently combined its CBS low-power WSHM-LD (Channel 21) with ABC/Fox affiliate WGGB (Channel 40), and will now have to spin either WWLP or the WGGB/WSHM cluster. (Because WWLP’s Chicopee facility is also a master-control hub for other Media General/ex-LIN stations, it seems likely that WWLP would stay and WGGB/WSHM would be sold, assuming the Justice Department signs off on that.)

We’ll keep you posted as this one develops.

*One state over, RHODE ISLAND Public Radio landed a very big name as its new leader. Torey Malatia comes to the statewide network after two decades at the helm of Chicago’s WBEZ (91.5), which he grew into a major national public media player with hit shows such as “Wait, Wait Don’t Tell Me” and “This American Life.”

We’ll have more in Monday’s NERW on Malatia’s new role in the Ocean State, too.

Read on for the rest of this week’s NERW coverage…