by Scott Fybush
in Free Content, Top of the Tower Podcast
0

In this week’s edition: 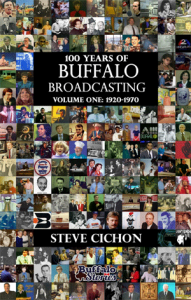 We’re back for our new fall season of Top of the Tower podcasts – and we start just down the Thruway in our neighboring market of Buffalo.

There’s so much broadcasting history that’s happened in the Queen City, from the earliest broadcasts of WWT and WGR in the 1920s, to pioneering UHF stations in the 1950s, to some of the best top-40 radio anywhere in the 1960s and 1970s.

As Steve told us over a nice Buffalo breakfast, and then in a conversation in the front seat of my car (with the noises of the Buffalo airport overhead now and again!), this is a project he’s had in mind for years – but it was the pandemic that gave him the spare time to get it written and published. (Would that we could all have been so productive!)

Brought to you by Shively Labs and Yellowtec.