(This installment of Site of the Week was originally published in 2005, and we’re reprising it now because these towers finally came down just last week. Long before the towers were finally razed, this site was silenced; in 2009, the construction of the Xanadu shopping/entertainment complex in close proximity to this site sent WEPN moving to a newly-built three-tower site across the Turnpike, straddling the Secaucus/North Bergen line. But then a whole bunch of factors caused Xanadu construction – including the demolition of the old 1050 site – to come to a crashing halt, leaving the old towers sitting there for almost five full years after the new site had signed on. In that time, 1050 ceased to be the English-language ESPN Radio outlet, with that format moving to WEPN-FM 98.7 and the AM flipping to ESPN Deportes Radio in 2012. As for the long-uncompleted Xanadu, it’s now known as “American Dream Meadowlands,” and it might open in 2016. Some dream…) 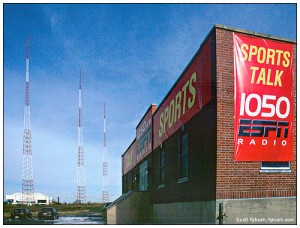 There’s just nothing in the world quite like the forest of AM sites that dot the New Jersey Meadowlands, just across the Hudson River from Manhattan. Over the last decade or so, we’ve had the chance to visit many of them – at least from the outside. But it’s always a particularly special experience to get the chance to see what’s inside these sites – especially when their engineers have just finished spending lots of time and effort renovating.

First, of course, the history: The station that’s now WEPN, with 50,000 watts of ESPN Radio sports, is the descendant of one of New York’s earliest AM stations. WHN signed on March 18, 1922, with 15 watts from a building in Ridgewood, Queens. It moved to Manhattan in 1923 when it was bought by the Loew’s organization, and by 1934 it had absorbed share-time partners WPAP, WQAO and WRNY and was settling in as a powerful occupant of the 1010 spot on the dial, eventually ramping up to 5000 watts day, 1000 watts night from a site in Astoria, Queens.

With the NARBA frequency shuffle of 1941, WHN moved to 1050, and a few months later it had completed construction on a two-tower facility at this site in East Rutherford, New Jersey, along what was then a rural stretch of Route 3 a few miles west of the Lincoln Tunnel.

(The authoritative Airwaves of New York recounts that the tests of the new 50 kW facility at East Rutherford caused interference to WINS, which had just moved to 1010 at a site just north of here in Carlstadt. WINS temporarily relocated to the old WHN facility in Astoria – it was, after all, perfectly designed to operate on 1010 – until it could complete construction of its new site south of WHN in Lyndhurst. You can see that site here, in our archives.) 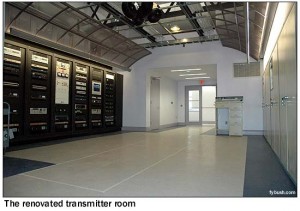 In 1948, Loew’s changed the calls of 1050 to WMGM, cross-promoting the station with its MGM movie studio, and within a few years 1050 would become one of the city’s first top-40 stations.

A hurricane in 1950 toppled the original towers here, which were rebuilt and then augmented by a third tower.

A sale to Storer in 1962 brought the return of the WHN call letters and a beautiful music format, which gave way by the seventies to country music. Emmis bought the station in 1986, and on July 1, 1987, the country came to an end and America’s first all-sports station, WFAN, was on the air at 1050.

WFAN was a moderate success on 1050, but operating on a Canadian/Mexican clear channel meant that at sunset, the signal from East Rutherford had to protect other 1050 operations in Toronto and Monterrey, as well as adjacent-channel KYW (1060) in Philadelphia, and so the 1050 signal missed much of the growing audience in New Jersey and upstate New York. Emmis bought out most of NBC’s radio operations in the summer of 1988, and on October 7, WFAN moved down the dial to the mammoth 660 signal that had been WNBC.

1050 went into a bit of a holding pattern at that point, handing off to Spanish Broadcasting Services under the new calls WUKQ. SBS already owned WSKQ (620 Newark), and the rules then allowed only one station per owner on each band. So while SBS negotiated a trade of 1050 for an FM facility, it was allowed to operate WUKQ as a noncommercial signal.

During the nineties, WEVD evolved into something of an alternative talk station for New York, with hosts like Alan Colmes providing points of view that weren’t often heard on WABC or WOR. Had it continued for a few more years, it might well have become a powerful home for progressive talk – but it was not to be. In 2001, the Forward reached a $78 million deal to sell 1050 to Disney, and on August 31, 2001, Colmes signed off the talk programming and 1050 flipped to ESPN Radio. The WEPN calls arrived on April 28, 2003, not long after ABC had converted its LMA of the station into an outright purchase. Today, WEPN is operated as a sister station to WABC, sharing studio space at WABC’s Two Penn Plaza facility. 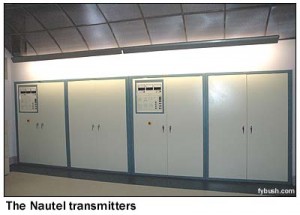 So how about a look around? A few notes before we get started: first, the neighborhood has changed quite a bit since 1941. The site now sits just off the access road that leads from Route 3 westbound to Route 120, heading into the Meadowlands Sports Center complex that sprawls to the north and west. The Continental Airlines Arena sits just north of the three self-supporting towers, and Giants Stadium is just across Route 120 to the west. To the east, the site backs up to the west spur of the New Jersey Turnpike (though, ironically, “you can’t get there from here” – the only good way to get to the access road is from the Lincoln Tunnel or from Exit 16E off the east spur.)

With all those changes in owners over the years, the site had become somewhat neglected by the time the ABC folks took over. A full-fledged overhaul of the site was in order, and that’s just what they spent much of 2004 doing. The two 60 kW Nautel transmitters and phasor remained in place, with a new enclosure built around them, wrapped in plastic and pressurized to keep construction debris from getting inside while the rest of the building was gutted around them. The result is one of the finest-looking transmitter plants we’ve seen lately. Come in the front door, through a small entrance hallway, and you’re facing two glass doors that lead to a spacious and spotless transmitter hall (complete with fancy lighting fixtures that were installed out here as a test; similar units are going into the hallways at the Penn Plaza studios and offices.)

On the left as you walk in (and the right in the wide view above) is a small room that was once used as an emergency studio and now handles the power supply to the site. Beyond that are the Nautels and the front of the phasor cabinet, which started life as a Gates but has been modified over the years.

Across the room, new racks hold all the STL, processing and remote control gear. Look carefully above the racks in the wide view above, behind the light fixtures, and you’ll see a row of windows above the racks. In addition to looking cool, they provide easy access from this room to the hallway behind the racks, which is lined on the other side with a small kitchen area and bedroom/bathroom facilities. (This site would, of course, have been staffed back in the day.) There’s a small shielded room back here where the phone lines come in, and a ladder leading up to a little loft storage area up above. You can never have enough storage!

Behind the transmitters, a hallway leads back to the phasor, which is open at the rear and enclosed behind a cage of wire fencing. Keep heading towards the back of the building and you’ll come to the generator room – and off the side of the generator room, a little door about two feet high. (If you ever saw “Being John Malkovich,” portions of which were shot not far from here, you’ll get the joke when the engineers call it the “seven-and-a-halfth” floor!) It’s actually the space under the raised transmitter room – raised because this is, after all, a swampy area that floods at times – and it’s used for more storage.

At the extreme north end of the building, on the other side of the hallway, is a garage where the station’s remote truck is stored. And come back out to the front of the building, just to the north side of the front door, and you’ll find yourself in a well-lit office area that’s home to a small New Jersey sales office for the station and a makeshift studio that can be used in case of emergency and the occasional Giants Stadium remote.

Thanks to Kevin Plumb and his crew for the visit!

And don’t miss a big batch of IDs next Wednesday, over at our sister site, TopHour.com!

Next week: WILL and Champaign-Urbana, Indiana