Site of the Week EXTRA: Milwaukee’s WISN and more

This week’s Tower Site EXTRA kicks off our Tower Site Calendar sales season! Tower Site Calendar 2015 is on its way back from the printer, chock-full of pictures and stories about America’s broadcast infrastructure. For the next few weeks, we’ll bring you some of the Tower Site of the Week installments that feature images appearing in the new calendar. This week, it’s the giant 9-tower WISN array in Milwaukee, seen here as part of our Big Trip 2005 retrospective in this column that first appeared here in June 2006.

You can order your calendar right now for prompt shipment from our Fybush.com Store – and don’t forget that with a subscription to Fybush.com (they start at as little as $15 a year), you get access to 15 years’ worth of these Tower Site  of the Week installments, all neatly indexed by state – plus full access to every Monday’s NorthEast Radio Watch. Thanks for your support! 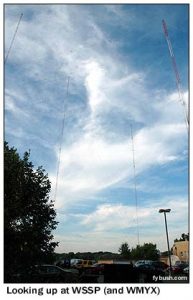 One of the real highlights of our August 2005 trip was our whirlwind swing around Milwaukee, a market we’d never visited before. As you may recall from last week’s episode, we were fortunate, as the trip was coming together, to be in contact with several Milwaukee engineers with a passionate interest in radio history, including Kent Winrich at Clear Channel and Chris Tarr at Entercom. After beginning our Milwaukee visits on the afternoon of Wednesday, August 17 at the WTMJ “Radio City” facility, we headed west to the Clear Channel studios and WOKY (920) transmitter facility – and that’s where we wound up at the end of last week’s edition.

So we start this week just a couple of miles away, at the Hales Corners facility that’s home to the studios of Entercom’s sports WSSP (1250), AC WMYX (99.1) and top 40 WXSS (103.7 Wauwatosa), where Chris is our tour guide for a most interesting visit.

Explaining the history of this site requires us to dip very deeply into the wells of old Milwaukee radio history (and, frankly, a couple of cold Old Milwaukees wouldn’t hurt afterward) – and we’re indebted to the late Dick Golembiewski and his Milwaukee Horror Hosts site for helping to clear a lot of it up.

In a nutshell, this facility was originally built for a station called WMAW, which came on the air at 1250 just after World War II, with a seven-tower array at this same site. Along the way, WMAW ended up in the hands of broadcast entrepreneur Lou Poller, who renamed the station WCAN and then became involved in an early TV adventure, putting WCAN-TV 25 on the air in 1953 as a CBS affiliate. We’ll hear more about WCAN-TV’s brief history later – for now, the key point is that after WCAN-TV failed, Poller sold WCAN radio to Milwaukee Broadcasting, which owned WEMP (1340). WEMP moved to 1250, became a major force in Milwaukee radio for a while, and WCAN was history.

In 1960, WEMP rebuilt this site with the present five towers, adding WEMP-FM on 99.1 from one of the towers. Much later on WXSS joined the family, with a new studio/office building (shown above at left) being built between the old building (above at right) and West Grange Avenue.

A few years ago, the WEMP calls went away, replaced by “Sports Radio 1250,” WSSP. Remember our stop at WAUK (1510) last week, and our mention of the unusual programming strategy there that puts WAUK’s sports programming on the 1510 daytime facility when the sun is out, moving to leased time on WMCS (1290 Greenfield) at night? WSSP plays off that by proudly proclaiming itself “Milwaukee’s Full-Time Sportsradio Station.” Across the hall from WSSP’s spacious studio is the studio for WXSS, which was calling itself “Kiss” long before Clear Channel was using the name nationally.

New studios are nice – but we’re here for the history, and that’s out in the old building. Walk right in the front door, and you’re standing in a big room with glass separating you from an L-shaped array of transmitters for WSSP and WMYX, including a gorgeous old RCA that still serves as a very useful backup for WSSP’s current Harris. To the right of the transmitter room are old studios for WEMP, now being used as storage – and down in the basement we find several more studios that were once used for production back in the day.

One more note on that nifty transmitter room before we head on – one of Chris’ long-term projects is to clear out that space and renovate it as a live-performance studio for the two FM stations. What a neat room that will be!

The focus of the visit next turned back to more of Kent’s Clear Channel facilities, starting a few miles to the south, just across the Racine County line a little east of US 45, at the tower of WKKV (100.7 Racine), Clear Channel’s urban station. 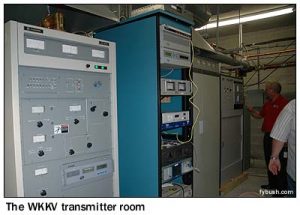 This was Kent’s first FM in town to go digital, and if you look carefully, you can see Kent adjusting the BE digital transmitter at the right side of the photo.

Another couple of miles to the south on US 45 brings us to Bennett Road, and that’s where we see one of only two nine-tower AMs we’ll find on this trip.

Interestingly – and more than just coincidentally – both of the stations in question are on 1130, a crowded channel indeed in the midwest. In Detroit, the nine towers of WDFN send that station’s 10 kW night signal straight north. Over in Minneapolis, the nine towers of KFAN send its 25 kW straight north. And that leaves just enough room in the middle for WISN in Milwaukee, which was a 5 kW fulltimer on 1150 until the mid-fifties, when it went to 50 kW day, 10 kW night and built its current nine-tower facility way down here in Racine County.

Especially by fifties standards, this is a pretty small building for a 50 kilowatt station, and even today there’s not a lot of wiggle room inside. Two rows of transmitters greet you as you walk in – the new Harris 3DX50 shown at left in the picture above, and an older Nautel next to that.

There are impressive control panels for both the six-tower daytime operation and the nine-tower nighttime phasor. But where are the actual phasors? Kent unlocks a door at the back of the building, and there they are – daytime on one wall, nighttime on the other!

As the sun begins to set, we head out into the tower field to get a closer look at the nine-tower array, including that interesting overhead ground screen around each tower base. 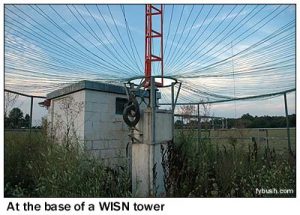 Before it gets completely dark, there’s still one more site to get a quick look at.

In last week’s episode of Site of the Week, we saw the studios of WTMJ (620), and now it’s time to see where that signal comes from. Until a few years ago, WTMJ was a typical 5 kW regional signal, transmitting from the same site on Bluemound Road in Brookfield, west of Milwaukee, that it had used since 1927.

When the 5 kW power limit on regional channels was lifted, though, WTMJ was the very first station in line for an upgrade, winning permission in 1995 to go to 50 kW days, 10 kW nights from a new six-tower site about a mile and a half south of the WISN site. All six towers are used at night, sending the signal in a fairly tight beam north; by day, the four-tower pattern aims mostly north, but the signal’s still pretty good as far south as Chicago’s northern suburbs. We’ll go back and see the inside of the current WTMJ site on a future visit to Milwaukee; sadly, we’re told that the 1927 Brookfield site is completely gone, replaced by a housing development. 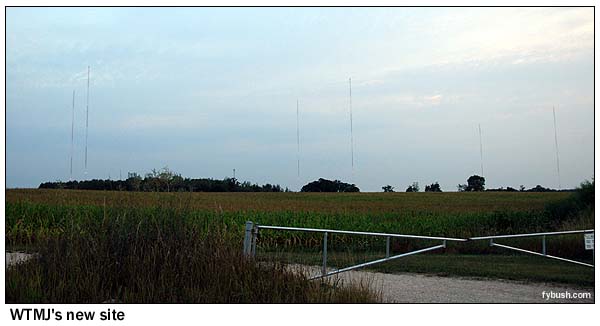 (One more historical note about WTMJ: back in 1932, it was WTMJ’s protected status on 620 that led to the development of the very first modern AM directional antenna system, as WFLA-WSUN in Tampa went directional to protect Milwaukee.)

Thanks to Chris Tarr and Kent Winrich for the tours!

On Friday: Big Trip 2013 continues with a visit to Rochester, Minnesota