by Scott Fybush
in District of Columbia, Free Content, Maryland, Tower Site of the Week
1

You’ll get to hit all the tourist spots, of course – but there’s a bit of a tradeoff: at least one of those days in Washington will be spent away from the usual tourist route, visiting radio towers and studios.

Fortunately, our non-hypothetical offspring have grown up understanding that tradeoff, and so my seven-year-old traveling companion was at least willing (if not immediately eager) to head eastward on I-695 away from the Mall and over to the newly-bustling neighborhood around the Navy Yard to pay a call on the new CBS Radio studios.

This was a big project for CBS, which had been operating its cluster of five FMs (WIAD 94.7 Bethesda, WPGC 95.5 Morningside, WNEW 99.1 Bowie, WJFK-FM 106.7 Manassas and WLZL 107.9 College Park) and one AM (WJFK 1580 Morningside) from several suburban locations but was eager to get them consolidated at a new facility within the District.

What CBS ended up with was a second-floor space in a new office building on Half Street (halfway between First Street SE and South Capitol Street), just up the street from the Nationals’ ballpark. Four of the six stations occupy a row of studios looking south toward the ballpark: Spanish-language “El Zol” WLZL at the far end, then urban WPGC, then hot AC “Fresh” WIAD. These studios are all fairly similar in layout, with the SAS consoles that most recent CBS builds have utilized.

At the far end of the studio hallway, the corner studios belonged to WNEW, the noble experiment CBS made at an all-news challenger to market behemoth WTOP. The WNEW newsroom stretched around the corner and down to the WJFK sports studios at the far end.

Alas, we say this in the past tense, because the plug was abruptly pulled on WNEW’s all-news format not long after our visit. In place of a news wheel modeled on New York sister station WINS, WNEW is now leased out to Bloomberg Radio, which operates it as WDCH. (The WNEW calls have returned home to New York City on 102.7.)

The rack room sits behind a glass wall, with a lounge area looking into it.

Around the corner, the WJFK sports format comes, ironically, from a studio suite on the far side of the building from the ballpark. WJFK is the flagship for the Nationals, the Capitals and the Wizards, and several smaller studios arrayed around the rack room can be used for network origination or to feed play-by-play to other signals when there are conflicts. (WJFK AM, meanwhile, carries CBS Sports Radio off the satellite.)

The WJFK studios have a Capitol view – and if you have keen eyes, as at least one reader already noted, you can see the distinctive self-supporting tower of WDCW (Channel 50) out to the north up Georgia Avenue from here as well.

As one does these days, the facility also includes a performance studio and a live radio studio downstairs from the main air studios. The street-level “DC Lottery Live” can hold live broadcasts from any of the stations; some of them do live morning shows here and open the front doors to anyone who wants to come watch radio being made and eat some donuts.

The studios aren’t the only thing CBS Radio has been changing. Out in suburban Prince George’s County, Maryland, the transmitter site of WJFK(AM) is now home to two more AM signals. WZHF (1390) was the old WEAM, long licensed to Arlington, Virginia, and for many years it shared its transmitter site out on Crimmins Lane with WUST (1120), New World Communications’ leased-time ethnic station.

That Virginia site became too valuable for AM radio, and so WZHF (which relicensed to Capitol Heights, Maryland) and WUST signed a deal to triplex on the 1580 site and move into the 1580 transmitter building.

The 1580 AM operation was long a daytimer, but the move to this four-tower site allowed for a daytime increase to 50 kW and the addition of a nighttime signal with 270 watts, which doesn’t do much over Washington itself but provides some useful local service to Prince George’s County.

When the new tenants arrived, the engineering shop was walled off, creating a new room in the middle of the building leading back to another new room at the far end.

WZHF got the middle space for its transmitters (a new Nautel and a BE that moved over from Arlington), while WUST ended up at the far end with a new Nautel NX50 supporting its current 20 kW daytime operation and a pending CP to go all the way up to 50 kW, using all four towers instead of non-directional operation from just one.

WZHF went from 5 kW in Arlington to 9 kW daytime, 1 kW nighttime at this site, using all four towers for both its day and night patterns.

Head west just a little ways down Walker Mill Road from the AM site and you come to the WPGC-FM site.

The dreary weather wasn’t very cooperative for outside photos, but there’s plenty inside to see here – and even more, once you learn about the fascinating history that links 95.5 and 1580.

The excellent site at AMandFMMorningside.com has more about these stations than you’d ever want to know, going back to the FM’s start in 1947 as WBUZ 96.7, the radio voice of the local bus company. “Transit-casting” didn’t work out well, and after moving to 95.5, WBUZ went dark for a bit. By 1954, WBUZ had built this site on Walker Mill Road, and in 1956 it also became the transmitter site for WPGC (1580), which had been operating for two years from a less-favorable site in Morningside but needed more land for a two-tower array.

WPGC’s studios, meanwhile, moved in to the former WBUZ studios at the bus company’s garage – and by the end of 1956, Mac Richmond (of WMEX, Boston infamy) bought out the FM signal, turning it into WPGC-FM.

I think – but am far from certain – that the dusty former studio spaces at one end of this low-slung brick building date to that 1956 period when the FM (which was briefly “WRNC, Rock and Country”) was operating both studios and transmitters out here; in any event, most of the top-40 heyday of WPGC AM and FM came from studios at several other locations, though it was transmitted from this site.

(There’s some confusion on the WPGC history site about a “move” that’s alleged to have taken place in 1981; as best we can tell, the only thing that actually changed was the street address of the building, since the building and towers at this site appear on topo maps as far back as the 1960s.)

The 450-foot tower that carries WPGC-FM and an aux for WIAD went up in 1975, detuned from the AM array; as noted earlier, the AM station moved eastward to its current site in the mid-1980s to go from 10 kW to 50 kW, leaving behind the shorter towers. One was used for a time by Radio One’s WYCB (1340), and the other was replaced by a tower now leased to wireless carriers.

(You can see some photos inside the transmitter room from the 1970s or early 1980s at the WPGC history page; today’s BE main transmitter sits in what was then open space by the HVAC systems at the far end of the room, and most of the 1970s-era equipment racks are now empty.)

My young traveling companion got to tag along for one more DC studio visit, too – when last we checked in at WETA (90.9) over in Shirlington, Virginia, the public radio classical station was getting ready to replace its old Studer consoles with a new Axia system, complete with a main studio console carefully divided in half to fit the old Studer split-console layout. (WETA’s engineers even replicated the wooden end panels of the Axia after cutting it in half. Neat, huh?) 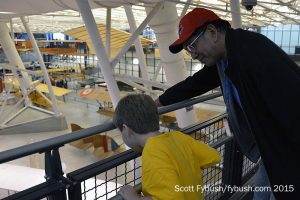 This installment of Tower Site of the Week is dedicated to the memory of Max Cacas, the veteran DC newsman and good friend who we met later on in this November 2015 trip, and who died suddenly just a few weeks later, far, far too young.

Max would have enjoyed these pictures so much. He is dearly missed.

Thanks to Kim Sacks and WETA’s William Harrison for the tours!

And don’t miss a big batch of Washington IDs next Wednesday, over at our sister site, TopHour.com!

NERW Extra: Our 2016 AM Improvement Filing