by Scott Fybush
in Free Content, New York, Tower Site of the Week
3

Nestled in the bucolic suburban hills of eastern Westchester County sits one of New York’s – and America’s – in fact, the world’s – most unusual small radio stations.

Among radio enthusiasts, WVWA (900) is best remembered for its early-seventies experiment with the “Nine!” format, a high-energy, monosyllabic top-40 mix that paved the way for the Qs and Zs and Kisses and Blinks (especially, one suspects, the Blinks) for generations to come.

And while the “Nine”-era WVWA was justly acclaimed for jocks like the legendary Johnny West and for its wild promotions (all chronicled in great depth at the wvwa.com tribute site), Tower Site of the Week has been researching the station’s earlier history (for our upcoming book The Airwaves of Metro Eastern Westchester, Volume Two) – and what a history the station had in its early years!

WVWA signed on April 1, 1947 under the calls “WLAW,” founded by a group of veterans recently returned from the European front. For reasons not entirely clear in the FCC’s files, the station was erroneously issued a callsign that was already in use in Massachusetts, and its profile was so low in the broadcasting community at first that more than a year elapsed before anyone noticed and the Pound Ridge calls were changed to WVWA. 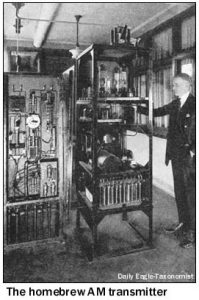 It is not commonly known that the WLAW founders in fact applied for and were granted an FM construction permit as well, the last to be granted on the old 42-50 MHz band. “W99PR” would have operated at 49.9 MHz, but the money ran out not long after WLAW built its unique 90-foot Blaw-Knox tower. (In fact, a 65-foot-wide capacitance hat that was to be built atop the tower also was never built, perhaps explaining the legendarily bad signal AM 900 has had most of its life.)

That lack of funding also explained the choice of the transmitter that WLAW/WVWA would use for its first few decades: a homebrew unit that generated 100 watts “on a good day.” In a 1972 interview with the Pound Ridge Eagle-Taxonomist, station co-founder Howie Leonard recalled that the unit had apparently originated at the University of Wisconsin’s 9XM before being sent to Costa Rica to be used by the Universal Fruit Company for many decades. (“Smells like bananas in here,” was a frequent refrain among visitors to the transmitter site just off Route 137 in its early years.) 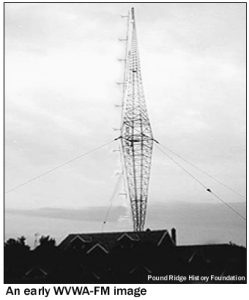 In 1952, after losing out on its initial application for a TV station (the proposal to put WVWA-TV on “Channel 0,” somewhere in the 31-meter shortwave band, was summarily rejected by the FCC), Leonard applied for an FM station. (“It’s where all the action is,” said Leonard’s wife Lolly to an Eagle-Taxonomist reporter.)

An early plan to put the station on 108.1 MHz with a highly-directional antenna aimed at Pound Ridge from the Armstrong tower in Alpine, N.J. was laughed out of the FCC, so the Leonards went with plan B, which involved (as best we can reconstruct from the incomplete records at the Pound Ridge History Foundation) a 250-watt transmitter and a 16-bay antenna operating at 99.9 from the Pound Ridge site.

When the antenna arrived at “Broadcasting Acres,” the lavish WVWA compound, engineers quickly realized that it was actually taller than the 90-foot tower. While they repaired to the nearby “Etherwaves Pub” to figure out what to do next, the Leonards installed the antenna themselves, burying the last four bays underground to make them fit and installing the rest at angles that apparently gave the station severe beam-tilt and sent most of the signal above the heads of its audience. (Ironically, the Eagle-Taxonomist  reviewed the station’s inaugural broadcast of opera records by noting, “W.V.W.A.’s F.M. programming seemed to hover far above the heads of the average Pound Ridge audience.”)

The result would have been atrocious, had anyone in eastern Westchester had an FM radio to tune in. By now, though, Howie Leonard had become close friends with FM inventor Edwin Howard Armstrong, who offered his services to fix WVWA-FM.

Armstrong spent much of the summer of 1953 rebuilding the transmitter and dismantling the 16-bay antenna, then proceeded to spend much of the fall building his own 12-bay antenna atop the 90-foot Blaw-Knox.

There are many in Pound Ridge to this day who remember the sight of the intrepid Armstrong, by now in his sixties, cavorting atop the WVWA-FM antenna nearly 200 feet above the ground.

In December 1953, the revived WVWA-FM returned to the air, with Howie Leonard confidently proclaiming to the Eagle-Taxonomist that “FM is the future of radio” and predicting that AM would be obsolete “by the middle of 1954.”

Behind the scenes, however, station records show that Leonard was far more worried about the money that was pouring into the WVWA-FM operation. One WVWA staffer of the era recalls an argument in the hallway of Broadcasting Acres between Leonard and Armstrong. Leonard had just returned from a Westchester Association of Broadcasters convention at which other station owners were talking about shutting down their FM operations. “If every other station owner jumped out of a 13th floor window, would you do that, too?,” Armstrong reportedly shouted at Leonard before storming out. By the end of January, an increasingly unhappy Armstrong was complaining that the Leonards hadn’t paid him for the work he had done, and staffers recall an especially tense meeting in late January that ended with Howie Leonard storming into the FM wing of the building and pulling the plug on WVWA-FM. (Nobody called to complain.)

In the meantime, Leonard had finally won a TV construction permit, and in the summer of 1954 the old FM antenna and transmitter were modified (with parts from a DuMont television set, a Federal FM transmitter and a John Logie Baird Nipkow-disc-era British transmitter) for the debut of WVWA-TV, channel 79.

With 1300 watts of visual power into an antenna that was apparently still tuned to 99.9 FM, WVWA-TV made its debut to an audience that already received seven VHF stations from New York City and one more from nearby New Haven, Connecticut.

In a 1985 exhibit, Electron Beams and Crazy Dreams: Remembering Westchester’s TV Heyday, curators at the Westchester Television Museum remembered the brief heyday of WVWA-TV, which operated for 90 minutes daily (two hours if it had programming from its lone network affiliation, a secondary hookup with DuMont) from a studio at Broadcasting Acres:

They set up “viewing areas” in the Daitch Shopwell parking lot across the street, as most people in the service area were not, in point of fact, “serviced”.

WVWA-TV’s “Grade B” contour reportedly extended as far as Bedford, N.Y. and Wilton, Connecticut; within that 8-mile radius, at least 100 homes had the expensive converter and outdoor antenna needed to receive Channel 79.

While the Leonards had gone to the expense of obtaining brand-new color equipment for channel 79’s local programs (“News Carousel,” “Eastern Westchester on Parade” and “Talent Time” were among the highlights), a survey in the fall of 1954 found that only two potential channel 79 viewers had color TV sets – and in any event, the transmitter itself couldn’t pass RCA color, having been modified two years earlier for the CBS color-wheel system.

On November 19, 1954, just six months after WVWA-TV’s big debut, channel 79’s brief saga came to an end when Broadcasting Acres burned to the ground in a mysterious late-night fire.

(From the Sunday Taxonomist-Instigator: “Pound Ridge Fire Department officials continue to investigate the fire that destroyed W.V.W.A. radio and television station Friday night. Officials briefly detained John L. “Johnny” Westendorffer, 12, of Pound Ridge, after neighbors said they had often seen him behind the station late at night with gasoline cans, but released him without charges.”) 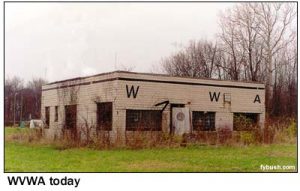 After spending all their money – including what would have been their annual insurance payment – on WVWA-FM and then WVWA-TV, the Leonards lacked the funds to rebuild Broadcasting Acres. WVWA-TV would never return to the air, though its construction permit would remain active in FCC files well into the mid-sixties.

WVWA(AM) returned to the air in early 1955 from a new building at the Broadcasting Acres site, and it was there that so much history was made at “Nine Double-O Radio” and “Nine” over the next few decades.

In recent years, like so many small AM stations around the country, WVWA has fallen on hard times, frequently spending several months at a time off the air. The Blaw-Knox tower now lists at a slight angle, and the transmitter is housed in the back of a station wagon behind what’s left of the studio building. A recent deal that would have made the station the “New York” flagship of “America’s first all-libertarian talk network, Air Whatever” fell through – but if there’s anything to be learned from WVWA’s history, it’s that you can’t count a 250-watt daytimer on a Canadian clear channel out completely.

At press time, we’ve learned that WVWA’s current owner, Buzznet Media (which purchased the station – but not the Broadcasting Acres property – from Howard L. “Len” Leonard Jr. in 1987), applied during the recent AM major change window to relocate WVWA to El Segundo, California, where it would operate on 520 kHz from a ten-tower array offshore on Catalina Island. Southern California doesn’t know what it’s in for…

Special thanks to the Pound Ridge History Foundation, the Westchester Television Museum, the library of the Pound Ridge Daily Eagle-Taxonomist and the authors of “Airwaves of Metro Eastern Westchester” for their assistance. And be sure to visit the WVWA Tribute Site to learn more about the station’s heyday!

And don’t miss a big batch of Pound Ridge IDs next Wednesday, over at our sister site, TopHour.com!