Site of the Week EXTRA: WBBM On The Move

by Scott Fybush
in Featured, Free Content, Illinois, Tower Site of the Week
0

This is a special Thursday “breaking news” Site of the Week – CBS Radio just filed to move Chicago’s WBBM from its longtime home in Itasca, Illinois to diplex with sister station WSCR (670) a few miles to the west in Bloomingdale. From the somewhat taller WSCR antenna, WBBM will drop down to 35 kW days, 42 kW nights, but with no significant reduction in its coverage.

Site of the Week visited WBBM in 2007 and shared our pictures with you in a piece first published here January 4, 2008:

It’s a new year here at Tower Site of the Week, and a new set of travel pictures to start us off. In August 2007, your editor and Mrs. Editor spent a few days traveling from her native Fort Wayne to Chicago, Milwaukee, Madison and then back to Fort Wayne via Rockford, Illinois, and along the way we had a chance to see some very significant broadcast sites.

In particular, we had a very productive afternoon on the west side of Chicago, visiting three historic and important 50 kW AM sites that we’re honored to be able to share with you over the next few weeks.

First on the agenda is the site of WBBM (780), CBS Radio’s all-news outlet that sits in a prominent location just northwest of the I-290/Elgin-O’Hare Expressway interchange in Itasca, a couple of miles west of O’Hare Airport. 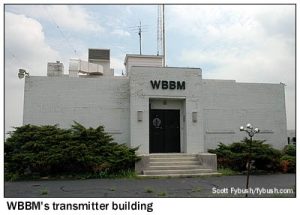 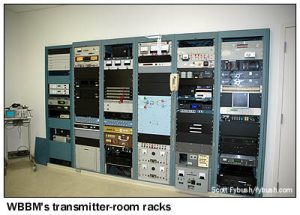 This was not WBBM’s first transmitter site, or even its first 50,000-watt site. The station signed on in 1923 from Lincoln, Illinois, down near Springfield, and moved to Chicago in 1924, eventually settling down at the Broadmoor Hotel. In 1927, WBBM moved its transmitter again, jumping to “super power” (5,000 watts!) from a new site in Glenview, north of Chicago.

Chuck Schaden’s 1988 history, WBBM: Yesterday and Today, recounts the rest of the Glenview saga: in 1929, the power was doubled to 10,000 watts, helped out in 1932 by the construction of a “T”-type antenna strung from two 305′ towers. WBBM increased power to 25,000 watts, then to the full 50,000 watts in 1935. (It was in this era that WBBM shared its 770 frequency with KFAB in Lincoln, Nebraska; for several years, WBBM and KFAB operated synchronously at night, simulcasting CBS network programming with KFAN’s carrier frequency controlled remotely from the WBBM transmitter site.)

Four years later, WBBM replaced the old antenna with a 490′ Blaw-Knox vertical antenna, only to lose the new tower to an ice storm a few months later, on April 13, 1939. A replacement tower was back up by September, but the Glenview site’s days were numbered, thanks to the growth of the nearby Glenview Naval Air Station.

In 1942, the Navy assisted WBBM in moving its transmitter and tower to Itasca, about 11 miles southwest of the old site. (WBBM wasn;’t the only big station displaced by wartime needs; in New Jersey, WJZ was bumped from its longtime site near Bound Brook to make room for more shortwave transmitters, leading to the construction of today’s WABC site in Lodi.)

WBBM signed on from its new Itasca home on May 1, 1942, and the building shows signs of its wartime origins even now. Those windows in front had been bricked up by the early fifties, and that little turret over the front door, though it’s now closed up, was once a perch where snipers could keep an eye out for anyone trying to attack the facility. 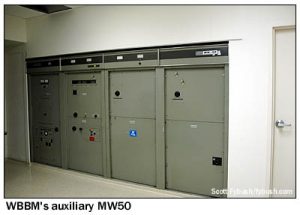 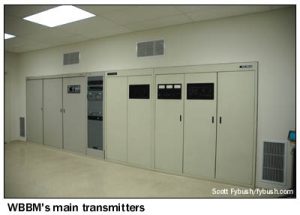 WBBM had a nearby neighbor at its new home – just a mile and a half to the north on Rohlwing Road, WGN (720) had moved in just a few years earlier, abandoning its old site far to the west in Elgin. 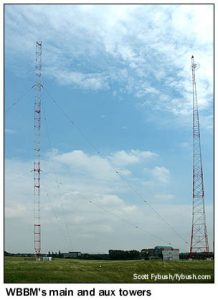 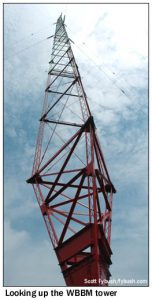 Today’s WBBM site boasts two towers – a guyed main tower 695 feet tall and a 253′ self-supporting auxiliary tower. (The photo at left is a bit deceptive, since the aux tower was quite close in the foreground and the main tower is off in the distance, toward I-290 at the back of the property.)

The main tower apparently dates to September 1947, and appears from all outward indications to be a Truscon, based on its distinctive latticework structure. The earlier tower (the 1939 Blaw-Knox that had been moved from Glenview) was apparently shipped south to CBS sister station KMOX in St. Louis, where it stood until the turn of millennium, whereupon it was replaced with a skinny new tower that we saw back in 2001.

The transmitter building itself is surprisingly modest. There’s a small vestibule, an office to the right, and some modest living quarters, plus an emergency studio to the left. The studio is surprisingly well-equipped, complete with multiple computer monitors, a pair of RE20s and a Pacific Recorders console that looks to have come out of WBBM’s longtime studio at 630 N. McClurg Court. (The studios recently moved to the CBS Radio cluster in the Two Prudential Plaza tower; we’ll have to get there for a tour one of these trips!)

The main transmitter room is at the back of the building, and it’s spotless and pristine, befitting a Class I-A clear channel network O&O in one of the nation’s biggest markets. 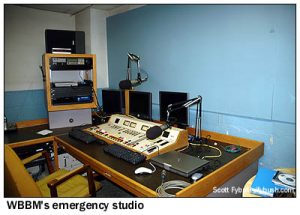 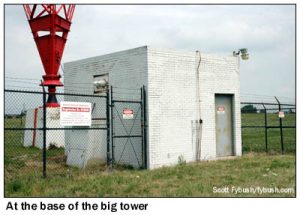 It’s truly a top-notch facility – and it’s not the only I-A clear channel we’ll visit on this very busy (and exciting) afternoon in Chicagoland. In next week’s installment, we’ll see how NBC outfitted its big Chicago AM, and how that signal eventually became a sister station to WBBM.

Thanks to WBBM chief engineer Don Coleman for the tour!