It’s nothing more than coincidence (at least as far as we can tell) that on the way back home from our summer 2017 excursion to Denver, the handful of TV studio stops along the way all ended up being CBS affiliates.

We showed you the transmitter site of Denver’s KCNC (Channel 4) a couple of weeks ago. KCNC’s ace video editor, Kevin Strong, was your editor’s photographer back in my TV reporter days a long time ago, and we made a quick stop to see the new set and control room in its downtown building before heading out of town. (We’ll get back at some point for a more detailed visit!)

After Denver came the long drive across Kansas (with some station visits around Salina and Abilene that we showed you in an earlier installment), some presidential history at the Eisenhower and Truman museums, a Royals game at Kauffman Stadium – and a quick stop south of downtown Kansas City to see the studios of the city’s main public radio station, KCUR (89.3).

For all the talk about public broadcasters occupying palatial studios, this is actually more typical of the local stations we visit. KCUR is licensed to the University of Missouri-Kansas City, and it occupies part of the second floor of an extraordinarily nondescript windowless brick building on the edge of the university’s campus.

There’s a big conference room and some offices past the lobby (where there’s a vintage audio console that’s been repurposed as a coffee table!), then an L-shaped corridor lined with studios and control rooms. KCUR does two local talk shows, “Central Standard” at 10 AM and “Up to Date” at 11, both from one talk studio, with a second talk studio available for other purposes. 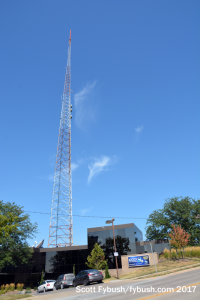 A few hours later on the road back east, we found ourselves in Des Moines, Iowa enjoying an Iowa Cubs game – and then stopping the next morning for a visit to the market’s top-rated station, Hearst-owned KCCI (Channel 8).

KCCI signed on in 1955 as KRNT-TV, sister to KRNT (1350) and the Cowles family’s Register and Tribune newspapers (hence the call sign!)

For the first three decades of its existence, channel 8 made its home in what had once been a 4200-seat downtown theater palace built by the Shriners (you can see pictures at the Des Moines Broadcasting site); in 1985, the old building at 8th and Pleasant met the wrecking ball and was replaced by a modern glass-clad building four blocks north on a hilly plot of land at 9th and Crocker.

By then, KRNT radio had been sold off and the TV station had changed, in 1974, to the current calls – “Cowles Communications Inc.”

Channel 8 lost its original downtown TV tower in the move from 8th and Pleasant, but it built a new self-supporter of similar size at its new home. It’s not the main transmitter tower – that’s a 2000-foot giant up to the north at Alleman, Iowa, shared with the other big stations in the market – but it handles STL, ENG and even backup transmitter duties, even into the digital era. (It helps that channel 8 stayed on RF channel 8 after the DTV transition!)

Entering from the dramatic two-story lobby (in oh-so-80s mirrored paneling on the balcony and ceiling), we head to the right and into master control, then into the technical core of the building and the spacious control room.

There are two TV studios on the west side of the building, a smaller one that’s used for interviews on the morning news and a bigger one that’s home to KCCI’s local newscasts.

Local news is a big deal in central Iowa, where national politics are in the blood every four years at caucus time, and we find the KCCI newsroom located one flight up at the end of the second floor.

They take their history very seriously at KCCI. Exiting the newsroom on to the balcony over the lobby, there’s a full wall of channel 8 timeline, complete with photos going all the way back to the station’s earliest days. Take a close look at the monitors behind the studio news desk and there’s a vintage full-color KRNT logo hiding behind the map. Back downstairs, a hallway on the other side of the building features a display of vintage Channel 8 equipment (and yes, that’s 9 year old Eli learning about film chains and such.)

Two and a half hours or so to the east (give or take the inevitable lunch stop at the Kum & Go sandwich counter, because this is Iowa, after all), we cross the Mississippi and arrive on the Illinois side of the Quad Cities market. We’ve shown you the studio building of WHBF-TV (Channel 4) in Rock Island, Illinois before, and we’ve always been fascinated by the history here.

Under all that windowless stucco sheathing, the part of this building on the corner of 18th Street and 3rd Avenue in downtown Rock Island dates all the way back to 1911, when this was the Rock Island Savings Bank, a one-story structure with soaring columns.

In 1950, the building got an Art Deco facade and became home to the Bond Drug store on its first floor and WHBF radio and TV upstairs, with a 486-foot self-supporting tower out back transmitting the channel 4 signal. (See more historic postcards here.) Later in the 1950s, the facade was again redone in truly classic ’50s downtown facade fashion – and then again more recently in the rather blander stucco.

Today, that stucco sheathing conceals the fact that this is really two attached buildings with a warren of corridors and stairwells inside.

If Mary Richards and Ted Baxter still walked the earth, they’d probably feel right at home here – this place feels reminiscent of the 1950s-era studio buildings that housed the fictional WJM-TV, not to mention the first few TV stations your editor ever experienced.

The WHBF newsroom runs back from the first-floor lobby to the parking lot directly under the big tower. This is no longer the main transmission facility for WHBF, which shares a taller tower with competitor KWQC-TV over on the Iowa side of the market – but this tower does hold a UHF digital replacement translator on RF 47, which fills in the core of the market for viewers who might struggle with WHBF’s RF channel 4 signal.

As we head upstairs into the 1950s-era additions to the building, the sloping hallways and multiple stairwells are a reminder that this is actually several connected structures.

And speaking of connections, another reason we were eager to visit this facility is that we’ve seen its master control frequently. Since it became a Nexstar-owned station, WHBF’s master control has moved from the Quad Cities to our own hometown of Rochester, where the operators at Nexstar’s WROC-TV also switch network programs and commercials for WHBF and its sister stations in the Quad Cities, Fox affiliate KLJB (Channel 18) and CW outlet KGCW (Channel 26). (It’s kind of fun to stand in the WROC master control at news time and watch Rochester and Quad Cities newscasts playing out simultaneously!)

The old WHBF radio studios up here on the top floor have been repurposed as production rooms and offices, with radio having long since moved out. (The old WHBF 1270 is now Spanish-language WKBF, while WHBF-FM on 98.9 is now EMF’s K-Love outlet, WLKU.)

The TV studio up here is long and narrow, running along an entire side of the building, with a morning news talk set on one end, weather green screen in the middle and the main news set at the far end.

That video screen on the front of the desk can display either the WHBF or KLJB logos, depending on which station’s newscast is coming from up here.

From here, it’s two long days of driving to get back home – only to head out on more summer travel just a week later, as you’ll see in our next installments.

Thanks to KCNC’s Kevin Strong, KCUR’s Ron Yurman, KCCI’s Alan Kline and the staff of WHBF for the tours!

And don’t miss a big batch of Kansas City and Iowa IDs next Wednesday, over at our sister site, TopHour.com!