by Scott Fybush
in Free Content, North Carolina, Tower Site of the Week
0

(NERW’s on the road this week, in the midst of “Big Trip 2013” across the northern plains; in the meantime, we present this encore installment in memory of Ted Bryan, the mostly-retired engineer who was our tour guide for this 2008 visit. Ted died this past week, and he’ll be deeply missed by the Charlotte engineering community and by everyone who’s had the pleasure of one of his WBT site tours.)

During our last (and only other) Charlotte visit back in 2003, we’d enjoyed a nice tour of the studios of the Queen City’s biggest AM station, WBT (in the company of then-news director Marshall Adams, now at KDKA in Pittsburgh) – but because the studios were in the midst of a complete rebuild, the station’s engineering staff hadn’t been able to get away for a transmitter tour.

This time, we weren’t leaving Mecklenburg County without getting in the door – and luckily, WBT PD Bill White and chief engineer Jerry Dowd knew there would be plenty of demand to see their historic site and had made arrangements for a number of tour groups to visit, bringing retired engineer Ted Bryan out to the site to serve as a tour guide during the show. 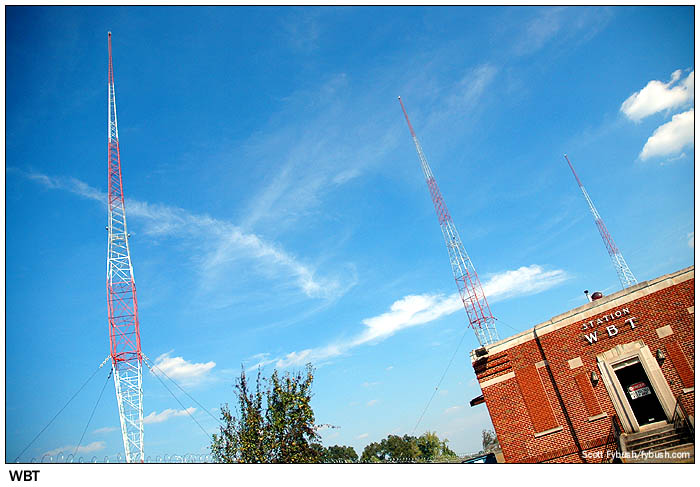 We’ll introduce you to Ted in a moment…but first, a quick look at the considerable history behind the station and the site:

WBT traces its history back to 1920, when Fred Laxton and two friends set up an amateur radio station in Laxton’s home. After more than a year of operation under experimental callsign 4XD, the station became licensed in April 1922 as WBT. Buick dealer C.C. Coddington bought the station in 1926, and in 1928 he increased the power to 5,000 watts from a new transmitter site south of the city, on farmland Coddington owned on Nations
Farm Road.

Eighty years later, that Nations Ford Road site is still in use, but it’s seen plenty of changes along the way. WBT was purchased by CBS in 1929, and soon raised power to 25,000 and then to 50,000 watts, non-directional, operating on 1080 as a class I-A clear channel with a 428-foot Blaw-Knox diamond-shaped tower that went up in 1934.

As we explored in our visit to KFAB a year ago, the end of World War II brought some big changes to WBT’s spot on the dial. The Charlotte station moved from 1080 to 1110 with the adoption of the NARBA frequency shift in March 1941, sharing the channel with just two other stations: Chicago’s WMBI (a daytimer authorized to sign on at Charlotte sunrise) and fulltimer KPAS in Pasadena, California. 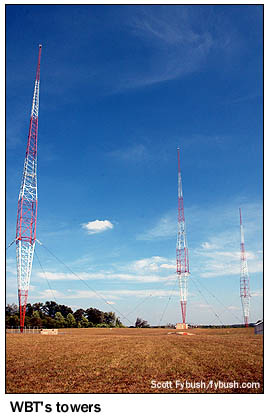 But in 1945, CBS secured construction permits for a shuffle that would improve its Chicago signal at the expense of Charlotte. CBS’ WBBM Chicago was sharing 780 with KFAB in Lincoln, Nebraska in what was becoming an increasingly uncomfortable arrangement. By downgrading WBT to class I-B and adding two more towers – identical 428-foot copies of the original Blaw-Knox, which became the western tower, closest to the road – for nighttime directional operation, CBS was able to move KFAB to a brand-new facility on 1110 in Omaha, also running 50 kW DA-N as a I-B, with the added benefit of being able to go non-directional at Charlotte sunrise, more than an hour before sunrise in Omaha.

WBT went directional in 1946, KFAB moved to Omaha and 1110 two years later, and by then WBT was in new hands: facing stricter FCC ownership caps, CBS had sold the Charlotte station to Jefferson Standard Life Insurance.

The new owners had a problem almost from the beginning with WBT’s night signal: the null toward Omaha from the Nations Ford Road site made WBT inaudible after dark in large areas to the west of Charlotte with little local service of their own. WBT experimented with a synchronous booster signal in Shelby, 40 miles to the west, to fill in the gap, but matters only got worse when Charlotte’s explosive suburban growth in the seventies and eighties put many potential listeners in what had been rural areas immediately west and southwest of the city.

That problem was finally rectified in 1995, when WBT bought the former WBZK-FM (99.3) in Chester, South Carolina, simulcasting on that class A signal, soon renamed WBT-FM, to cover most of the AM signal’s null within the market.

In the meantime, though, WBT had another problem to cope with: Hurricane Hugo in 1989 struck the Nations Ford Road site, leaving much of the two outer towers as tangled wreckage on the ground. WBT stayed on the air from its center tower, dropping power at night to provide some protection to KFAB, and within a year or so, exact replicas of the Blaw-Knox towers had been built to replace the damaged 1934 original near the road and the damaged 1946 directional tower at the rear of the property. (The original 1934 tower had been hit once before, by a 1942 cyclone that took off the top of the stick.)

So with all that history to contemplate, shall we make the drive down Nations Ford Road (which has long since ceased to be a rural road, and is now a busy suburban thoroughfare complete with a strip mall across the street from the transmitter), pull in the gate, and see what lurks inside?

The building we see today includes several additions: the original 1929 building, seen in the black and white photo up above, was expanded in front in 1932 when the original RCA 5A transmitter was joined by an RCA 50B, which must have pretty much filled up the place. Another addition, seen to the right of the front door, went in circa 1951-52, when the 50B was supplanted by an RCA BTA-50F1. (I’m indebted here to the 1950s-era recollections of former WBT engineer Bill Hicklin, found on the excellent BT Memories site.)

The subsequent transmitter history of the place found the 5A and 50B giving way to a Gates MW50 in the sixties, followed later on by a Harris MW50A in 1980 (replacing the BTA-50F1?), then by a Harris 3DX50 Destiny that replaced the Gates. There’s also a Harris Gates Five for occasional nighttime nondirectional emergency use, and to the left of the Destiny sits the Harris IBOC gear, though it wasn’t on the air when we visited.

There’s a small office at the front of the building, and for the NAB show, WBT engineers pulled out some of the gear from their archives tp show off to visitors. Two large rooms on either side of the main transmitter room probably once housed the big power transformers for the old RCAs, but now sit mostly empty. There’s a kitchen and some small storage rooms at the back of the building, also dating to the 1930s addition – and downstairs, there’s a 1950s-era fallout shelter studio, complete with a big Civil Defense sanitation kit and a tin of survival crackers, dated 1963. (Yum…) 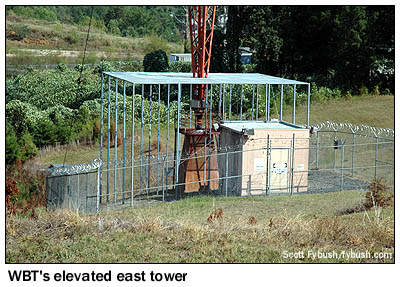 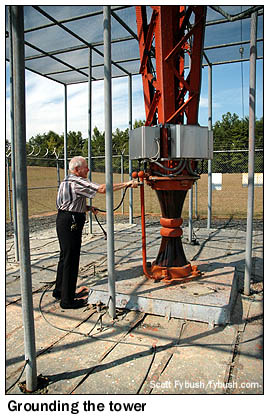 Out to the towers, then?

One thing we didn’t notice from the street is that the land here slopes gently downward to the east, approaching the back
of the property.

As a result, the easternmost tower was built on a pier that looks to be about eight feet high, to keep it level with the other two towers.

All three of the towers feature elevated ground screens, a
somewhat unusual sight, and we get to go up close and personal
with the center tower when Ted grounds it so we can approach safely. (The daytime non-directional operation, if I’m not mistaken, usually comes from the tower closest to the road, just as it
has since the thirties.)

Along the northern edge of the property, Ted shows us the concrete piers that still stand in two locations, marking the old bases of the original self-supporting towers that held up the wire antenna that WBT used until the first Blaw-Knox went up here in 1932. That antenna apparently survived for more than a decade as a backup, until the directional array was completed in 1946.

And as we walk back toward the transmitter building after surveying this magnificent – and unique – array of multiple diamond-shaped towers, Ted points out another distinctive feature: up on the roof of the building, there’s still a searchlight, a remnant of the World War II days when snipers were stationed up there to protect the facility from attacks.

Thanks to WBT’s Jerry Dowd and the late Ted Bryan for the tours!

It’s 2013! Do you have your Tower Site Calendar 2013 yet? We’ve still got some left, and they’re now half-price when you order from the all new Fybush.com store! Order now and your wall can be festooned with Florida and much more all through 2013. (We’ve also got the very last FM Atlas copies available for sale.)

And don’t miss more Pittsburgh IDs next Wednesday, over at our sister site, TopHour.com!