by Scott Fybush
in Free Content, Rhode Island, Tower Site of the Week
1

In most cities, radio stations are spread out all over the place – a studio cluster here, another one over there, and you could easily spend a whole day just driving around from one to another.

And then there’s Providence, Rhode Island, where no fewer than three broadcasters all make their home inside one somewhat nondescript building in a sketchy part of town that happens to have a great location overlooking I-95 and downtown Providence, with easy STL shots to most of the market’s transmitter sites.

That sketchy neighborhood long ago led to the informal nickname for 75 Oxford Street: to those who’ve toiled inside its walls and parked inside its barbed-wire fenced lot, it will forever be “the Ghettoplex.”

Ironically, the first Providence stations to call Oxford Street home aren’t even here anymore. It was WWLI (105.1) and WLKW (790, now WPRV) that first developed this building for broadcast use sometime in the early 1990s, installing studios on the third floor that didn’t end up being in use for very long. The first flush of consolidation made 105.1/790 into sister stations to WPRO (630)/WPRO-FM (92.3), and Tele-Media quickly brought 105.1 and 790 out to the WPRO facility on Wampanoag Trail in East Providence, which we visited in an earlier Tower Site of the Week installment.

But Oxford Street didn’t stay vacant for long: by 1995, the nucleus of what would eventually become Clear Channel’s Providence cluster had begun to take shape in the old WWLI/WLKW space, starting with WWBB (101.5 Providence) and WWRX (103.7 Westerly).

Today, the Clear Channel cluster consists of three FMs and an AM: WWBB is still here, along with WSNE (93.3 Taunton MA), WHJY (94.1 Providence) and WHJJ (920 Providence); 103.7 was eventually sold off, becoming first a Providence outlet of Steven Mindich’s WFNX network (with local studios still here at Oxford Street) and then the Rhode Island home of the WEEI sports network, with a local sales office down in Warwick.

So let’s take a tour of Clear Channel’s facilities here on the east side of the building: there are offices on the third floor, where WWLI’s studios once were, but the good stuff is all upstairs on the fourth floor, where the current studios are lined up along the wall facing I-95. Entering from the stairwell at the center of the building, our first stop is the WHJJ (920) talk studio and newsroom. Helen Glover’s morning show is the only local weekday offering there; the rest of the schedule is filled out with the usual Clear Channel/Premiere lineup of Beck, Limbaugh, Hannity and Levin.

Moving down the hall, WSNE (Coast 93.3) and WWBB (B101.5) also rely heavily these days on programming piped in from afar via Clear Channel’s Premium Choice service, but they still have studios here for their local airshifts.

There’s a rack room and engineering office on our left as we move down the hallway toward the back of the building, where the largest of the on-air studios here is also the one with most of the live airshifts. Rocker WHJY (94.1) gets the “corner office” with the prized view looking north toward downtown. You can’t see it in this shot, but there’s a nice sofa here, just beyond the console.

Now here’s the cool part about this building: there’s just a wall separating Clear Channel’s studios on the east side of the building from Hall Communications’ WCTK (98.1). Licensed to New Bedford, Massachusetts, “Cat Country” moved its studios into Providence in 1996, taking advantage of the same view of downtown that WHJY enjoys right on the other side of the studio wall.

There’s a rack room down the hall on the Hall side of the floor, too, as well as a production studio and a news booth that I believe can also double as a studio for WCTK’s usually-automated sister AM stations, ESPN Radio outlets WLKW (1450 West Warwick) and WNBH (1340 New Bedford).

(We didn’t get to the WCTK/WNBH transmitter site in New Bedford on this trip, but Mike Fitzpatrick has been there, and he has pictures over at NECRAT.us….)

And there’s one more station that calls 75 Oxford Street home as well: Davidson Broadcasting’s WKKB (100.3 Middletown) moved in here in 2007, broadcasting its Spanish-language programming from a studio on the west side of the third floor, across the hall from Clear Channel’s offices and just below the Hall studios. We didn’t get a tour of WKKB during our 2010 visit to the building, though we did at least knock on the door to see if anyone would answer.

So we close this installment instead out at the East Providence transmitter site for WHJY. This site at the end of Eastern Avenue is shared with WBRU (95.5), the Brown University student-run commercial modern rocker, and with WPMZ (1110 East Providence), and there’s some history to explain that sharing. Long before 94.1 was paired up with 920 (the former WJAR), it was WHIM-FM, paired up with country WHIM on 1110, and both 94.1 and 1110 had their studios here on Eastern Avenue.

In later years, when 1110 had moved its studios elsewhere, WHJJ moved in to the building at 115 Eastern, and it was that 115 Eastern Avenue building that WHJJ/WHJY vacated when they moved across the river to Oxford Street. (It’s still vacant today, save for the WPMZ transmitter occupying one room downstairs.)

We’ve actually shown you the WHJY transmitter room before, in a 2009 Site of the Week installment that also included the transmitters of WHJJ, WSNE and WWBB, but Mike Fitzpatrick wasn’t along for that trip, so we went back over to East Providence on this 2010 visit to see WHJY again, and to snap some better pictures to show you here.

WHJY occupies half of the block building out by the towers, and its crowded transmitter room is also home to the combiner that allows WHJY and WBRU to share the antenna atop the taller of the two AM towers here, which makes for a tight squeeze along with the backup Harris and main BE analog transmitters and the BE digital transmitter.

We’ll have one more installment from this quick Providence trip in next week’s Tower Site of the Week, but we’ll close this week with a trivia question for our commenters: can anyone name another spot where three stations (or clusters) owned by different entities each have their own studios and offices in the same building? We know of at least one, a few hours down the Atlantic seaboard; can you name it – or any others?

Thanks to Steve Conti and Steve LaRiviere at Clear Channel and Bob Walker at WCTK for the tours! 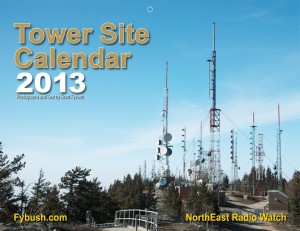 It’s that time of year! Pre-ordering has begun for the all new Tower Site Calendar 2013, shipping in mid-September from the all new Fybush.com store! Order now and save $2 off the regular price…why wait? (We’ve also got the very last FM Atlas copies available for sale, and the new edition of the National Radio Club’s AM Log.)