by Scott Fybush
in Free Content, Kentucky, Tower Site of the Week
2 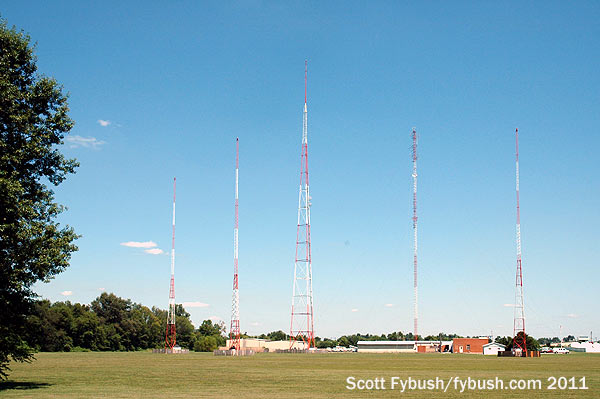 One of the fun things about our annual fall preview of the pictures in the new Tower Site Calendar is this: it also provides a sort of “fall preview” of some of the trips we’ll be profiling in the upcoming season of Tower Site of the Week.

Take, for instance, the image to the right. That’s WVJS (1420) in Owensboro, Kentucky, a venerable station that will mark its 65th anniversary next month – and will make an appearance in the 2013 edition of the calendar, too!

Just a few months after our visit in the summer of 2011, WVJS applied for a pretty significant downgrade, trading its 5 kW day/1 kW night DA-2 facility for non-directional operation at just 980 watts daytime, 20 watts after dark – so it’s a good thing we made it to Owensboro when we did.

Why the power drop? For that, we need to take a moment to explore a little of the history around this station:

WVJS signed on with the initials of its founder, Vincent J. Steele, back in November 1947, with studios on Allen Street in downtown Owensboro (at a site that’s now a parking lot) and a transmitter site out on the west side of town on US 60. As best I can tell, the facility then was pretty much the facility you see above: a tall tower (405′) common to both the day and night arrays, along with three shorter (207′) self-supporters making a sort of parallelogram. By day, the 5000-watt signal used the big tower and the self-supporter due west (second from left in the picture above). At night, the 1000-watt signal used the big tower and the other two self supporters, one to the northwest (leftmost in the photo above) and the other out to the southwest (rightmost in the photo above).

So what’s that other tower there, the one second from the right? That’s the local cable headend tower, and it made sense to have it out here in the days when Steele and WVJS also controlled the cable company.

WVJS quickly added a sister FM station: WVJS-FM was added in 1948, broadcasting at 96.1 from atop the tall WVJS tower. It would eventually become WSTO (“STereO”), moving to a new tower site to the west to better reach the larger Evansville/Henderson market in addition to Owensboro.

WVJS and WSTO stayed with the Steele family into the 1980s, and by 1996 they were part of a Brill Media duopoly with Owensboro’s other legacy stations. WOMI (1490) traces its history back to 1938, and its sister FM, which signed on as WOMI-FM in 1948, had become country giant WBKR.

Under Brill, WVJS, WOMI and WBKR all had their studios at the base of the WOMI tower on Frederica Street, just within the US 60 bypass on the south side of Owensboro. (WSTO’s studios had by then moved to Evansville.)

Brill’s bankruptcy in 2002 split up that cozy duopoly, and split WVJS and WSTO for the first time in more than 50 years. WSTO went to South Central Communications (where we’ll catch up with it in a future Tower Site installment), and WVJS went just down the road to become part of a cluster assembled by Nashville-based Bayard “Bud” Walters’ Cromwell Radio Group.

We find the Cromwell stations in a small office building on Tamarack Road, right around the corner from the WOMI/WBKR facility, now under Townsquare Media control. The Cromwell offices have expanded as stations have been added to the cluster, and now take up two suites along the front of this little strip center, one for studios and the other for sales offices. WVJS, now running the Cumulus “Timeless Classics” format, is right at the front – and its studio doubles as a passageway between the offices and the rest of the studios arrayed along a hallway toward the back of the building.

Who else is here along the hallway in these studios, most of them chugging along with automation in the early afternoon when we stopped by? There’s classic country WKCM (1160 Hawesville), classic country WBIO (94.7 Philpot), rock “97X” WXCM (97.1 Whitesville), country WLME (102.7 Lewisport, which flipped to sports “The Game” just a few weeks after our visit), and a studio at the end of the hall that serves multiple roles: it’s the control point for classic hits WTCJ-FM (105.7 Cannelton, IN) and standards WTCJ (1230 Tell City, IN) – and a production room, too. (WTCJ’s morning show comes from another Cromwell sales office in downtown Tell City, 20 miles or so to the east along the Ohio River.)

So what happened to WVJS’ directional array? That cable tower nearby eventually proved to be a real hassle to keep detuned, especially as the cable company ended up in separate hands from the radio station (it’s now part of Time Warner Cable). And then WVJS obtained an FM translator, W263BG, operating from the tall tower. With 250 watts from up there on FM, WVJS didn’t really need the hassle of maintaining an AM signal with lots of deep night nulls, and so those three shorter towers came down and only the tall one (along with the cable tower nearby) remains.

That’s about all we have to show you from Owensboro – but this early-afternoon stop was just the beginning of two intense days of radio and TV tourism in the greater Evansville area, and we have lots of great photos and tours to share with you when we pick up with the rest of our Evansville story later this winter here on Tower Site of the Week!

Thanks to Cromwell’s Mark Evans and Lee Wilson for the tour, and to Blaine Thompson of Indiana RadioWatch and Jacob Newkirk of Jake’s DTV Blog for being my tour guides in the Tri-State!