*In almost 25 years of writing this column, we’ve tried to obey a few basic principles: we lead off every week with a big story right here in the region we cover, and we (usually) avoid editorializing.

But sometimes there’s a story that makes us want to break the rules, which is why we start this week’s column way down south in Panama City, FLORIDA, in the aftermath of Hurricane Michael’s devastation.

In last week’s Top of the Tower Podcast, we talked about the preparations for the storm, a discussion which came with a few basic assumptions that had never been challenged in years of covering stories like these. One of the most basic of those assumptions was the idea that the public service value of returning to the air after a storm is of paramount importance. Without power lines, net connectivity or cable TV, radio stations should be striving to restore service as quickly as possible after a big storm…right? 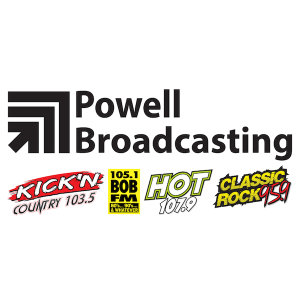 Meet Powell Broadcasting. Even before the storm hit, it was apparently winding down operations in the Panama City market, having struck a deal to sell its biggest station, WPFM (107.9), to EMF Broadcasting just a few weeks earlier. Even without WPFM, Powell’s Panama City Beach studios were still going to be home to three more FMs, classic rock WRBA, country WKNK and variety hits WASJ, at least until the company found buyers for those, too.

Then came Michael, whose winds dropped the STL tower next to the building right through the roof, letting the rain pour in and causing severe damage to the studio equipment.

Here’s where we get the heroic story of engineers and air talent putting together a makeshift studio (or better yet, having been prepared ahead of time with an auxiliary studio site), returning the stations to the air and super-serving a community in dire need…right?

Alas, no. As our colleague Lance Venta first reported at RadioInsight over the weekend, Powell just walked away.

“We have made the difficult decision to cease broadcasting operations in Panama City,” Powell COO Robert Bond told RadioInsight. “Hurricane Michael did catastrophic damage to our physical plant to the point that rebuilding was uneconomic. We wish the entire Panama City community Godspeed in rebuilding.”

Powell’s staff? They’re out of work, no matter how hard some of them were trying to at least keep information flowing on social media during the storm. At least one of them, WRBA’s “Fitzdawg,” lost his home in hard-hit Mexico Beach before finding out he’d lost his job, too. WKNK’s former morning team is continuing to keep information flowing on their Facebook page, simply as volunteers for now.

There are, in fairness, some things we don’t know. Did Powell have business continuity insurance in Panama City? (You’d think that would be a must in hurricane country, and really pretty much anywhere, but again, it may be one of those disaster-prep suggestions that gets ignored until it’s too late.) Will Powell’s now-ex-staffers get severance pay? How much damage did the transmitter sites take, to go along with the devastation at the studios?

And it’s true, too, that Powell is a relatively small player; its only other stations are in Sioux City, Iowa, so there’s not a nationwide stream of revenue or resilience to fall back on. (It’s worth noting here that for all the opprobrium dished its way, iHeart was by far the best prepared of the station groups in Panama City. With the help of one of the best local engineers in the business, Charlie Wooten, iHeart’s stations began returning to the air within hours after the storm, and at last account on Sunday they were still the only radio signals operating in town. The locally-owned AM station that boasts of being the “first news-talk station in Panama City”? Its website doesn’t even mention the storm.)

It’s not our intention here to embarrass Powell in particular. We don’t know the specifics of its financial situation, nor of the full extent of the damage in Panama City Beach. With two TV stations also in the market, Panama City wasn’t a huge revenue market even before the storm, and with so many businesses shuttered, perhaps there simply wasn’t any way to earn back enough revenue to rebuild.

But we talk a lot here about disaster preparedness, and we’ll be at the kickoff of the Audio Engineering Society conference in New York on Wednesday to hear some of the best in the business (including our go-to expert, Howard Price) share some of their experiences.

If radio wants to continue to be able to portray itself as the last line of emergency communication after a disaster, we think it’s important to look at what goes wrong, as well as celebrating what goes right. It’s no accident that the iHeart FMs in Panama City (and up in devastated south Georgia, too) were among the few signals that the industry can point to as post-Michael success stories. Engineers like Charlie Wooten spend years preparing for the worst, and they’re fortunate to have the support of a corporate engineering department that gets it, too.

It’s bad for all of radio, though, to have to answer for situations like Powell’s. When we go to emergency officials to ask for special access to transportation and fuel, those agencies need to know we’re not going to disappear when we’re needed most. And if we’re not serious about being there then, what are we all doing here at all?

*Emergency prepareness won’t be the only thing on the agenda, of course, when broadcasters convene in NEW YORK in the next few days for the simultaneous Audio Engineering Society and NAB New York events, including the New York State Broadcasters Association’s award luncheon.

The broadcast track at AES includes your editor’s panel Thursday afternoon on Modern Transmission Facilities, including the leaders behind the Empire State Building and 1 World Trade Center plants in New York. There are sessions on podcast production, audio standards for video, audio over IP, and much more, including a special Friday night panel celebrating the 80th anniversary of “War of the Worlds.” (See the whole list here.)

*Did we say “War of the Worlds?” We sure did – and no city has a more enduring love affair with the radio incarnations of that H.G. Wells classic than Buffalo. It’s been 50 years since the old WKBW radio staged its own localized version of “WotW,” using its top-notch staff of jocks and newspeople to imagine an alien assault on the Niagara Frontier. The market never forgot that version (nor subsequent WKBW versions in the 1970s and a WGRF/WEDG production in 1998), and now the anniversary will be marked by the debut of a documentary about the WKBW production. 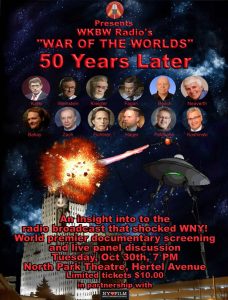 *Still more history in the region? You bet: at the University of Rochester, WRUR-FM (88.5) traces its legacy to a carrier-current operation that started in 1948, which means it’s now the 70th anniversary of the station. At the university’s news department, Jim Mandelaro, Peter Iglinski and student Susan Ziegler have assembled a masterful multimedia presentation featuring photos and lots of audio from the station’s many eras. Take an hour or three and go listen…it’s worth it! 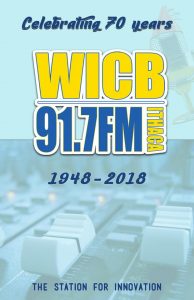 (Yes, your editor participated in the production – and yes, WRUR is now operated in part by WXXI, where your editor does news. Also, Iglinski is your editor’s former boss at WXXI. But still – go listen. It’s good stuff.)

An hour and a half to the southeast, Ithaca College’s WICB (91.7) also started as a carrier-current signal in 1948, and it too is celebrating a 70th anniversary as a result.

“The Station for Innovation” welcomed its alumni back on campus the weekend of Oct. 6 as part of IC’s alumni weekend – and you know, if you listened to our Top of the Tower podcast interview with prominent IC alum Peter King, that the CBS News Radio reporter was among the WICB/WVIC veterans who came back to South Hill to celebrate the station’s long, proud history on the Ithaca dial.

*Radio People on the Move in MASSACHUSETTS: Joe Calgaro has been tapped as the replacement for longtime WAAF (107.3 Westborough) PD Ron Valeri. Calgaro heads east from Milwaukee, where he’s been programming WHQG (102.9 the Hog), another one of the handful of very prominent active rock stalwarts around the country.

Out on Cape Cod, Jerry McKenna is out after five years as director of programming for Cape Cod Broadcasting. Nobody’s yet been named at the four-station cluster (WQRC, WKPE, WOCN, WFCC) to replace McKenna, whose career has included time at Kiss 108 and WZOU in Boston and at Cumulus in Worcester and Springfield.

It’s “Callsigns on the Move” in the Pioneer Valley, where Saga has added “-FM” at the end of WPVQ-FM (95.3 Greenfield), a result of having requested the WPVQ calls to replace WFAT (700 Orange-Athol) when it buys that AM signal from Steve Silberberg.

Where Are They Now? Former Kiss 108 and WODS morning co-host June Knight is changing coasts down in Florida. We just heard her a few weeks ago doing middays for Beasley at WQYK (99.5) in Tampa – but now she’s moved to Miami and Entercom’s WKIS (99.9) as half of the new “TC and June” morning show with Tim Conlon. 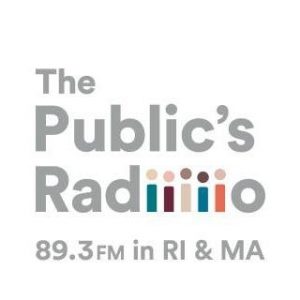 Or rather – “The Public’s Radiiiiiiiiiiiiiio,” with a whole cast of little i-figures who dance up and down in a new video on the station’s social pages, part of a refreshed visual and web presence for the network, which also includes WNPE (102.7 Narragansett Pier), WELH (88.1 Providence) and WCVY (91.5 Coventry.)

*In NEW HAMPSHIRE, Joe Limardi is getting ready to hand off his interim operations/brand manager duties at Townsquare’s WOKQ (97.5 Dover), which he took on after JC Coffey’s exit a year ago. Limardi also oversees the Townsquare cluster in Poughkeepsie, and he’ll make that his sole focus once the company finds a replacement for him on the Seacoast.

*And CANADA‘s newest radio stations will make their debuts at noon Wednesday. APTN, the First Nations TV network, won the competition for the Toronto and Ottawa FM licenses that had been lost by the former Aboriginal Voices Radio – and its “First Peoples Radio, Inc.” will flip the switches simultaneously to put “ELMNT FM” on the air over CFPT (106.5 Toronto) and CFPO (95.7 Ottawa).

In Toronto, Bob Magee (formerly of CHUM) will do mornings, followed by David Moses, Andrea Rooz, Julian Taylor and Janet Panic. Ottawa’s lineup includes Aiden Wolf in mornings, followed by Kayla Whitedick, Missy Knott and Cody Coyote. Radio veteran Dave Charles (Q107, etc.) will be operations manager – and we wish the new stations all the best as they get ready for launch day!

Top of the Tower Podcast #027: Disaster Recovery at the AES Show

Top of the Tower Podcast #027: Disaster Recovery at the AES Show