*LAS VEGAS – We’re once more unto the desert, our 19th year chronicling the NAB Show and all of its ancillary events for NERW readers and our Fybush Media clients. 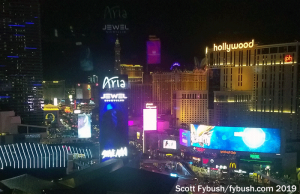 We’ll have a comprehensive report for you in next week’s issue (and in the meantime, watch our own Facebook and Twitter and Wheatstone’s social media all day Monday for our live video reports from the show floor, in partnership with our friends at Wheatstone!)

Even before the big NAB Show opens its floor this morning, though, there’s been plenty going on in conference rooms all around Las Vegas; we’re writing this, in fact, from the annual Nautel Users Group meeting, celebrating the company’s 50th anniversary with tech tips, plus a conversation about the AM all-digital experiment we discussed not long ago on our Top of the Tower podcast. (We’ll be bringing you more conversations from the show this week on the podcast, too…)

So what are the big topics we’ll be hearing more about this week here at NAB?

Broadcast TV’s future: For the TV side of the engineering aisle, the buzzword once again this year is ATSC 3.0. The new digital TV format is on the air with test broadcasts in several markets, such as Phoenix, Dallas and Lansing, Michigan, even though there aren’t yet receivers available to consumers and still won’t be for at least a few more months.

There’s plenty of promise behind ATSC 3.0, and a lot of it should sound familiar to anyone who’s been at these shows in recent years – sharper pictures, better audio, more interactivity, the ability to distribute high-speed data over broadcast facilities, mobile reception… you’ve heard all these promises, right?

Getting there, however, is a challenge: the transition this time will be entirely voluntary, and there’s plenty of skepticism about whether the benefits to broadcasters will be worth the cost. Some big TV groups, most notably Sinclair and Nexstar, have embraced ATSC 3.0, joining forces to create as close to a nationwide platform as they can assemble and hoping to provide data and transmission services to other customers. For the smaller local broadcasters who remain, fewer though those may be, it’s another story; viewers in those markets may be waiting a while for ATSC 3.0 to arrive at their antennas.

And before stations can get to the ATSC 3.0 promised land, there’s still the matter of the ongoing repack of their existing ATSC 1.0 signals. We’re right in the midst of the first few phases of repack, and we expect lots of questions at FCC panels this week about timeframes, reimbursement of expenses, crew availability and all the details that go into relocating hundreds of DTV stations on a tight schedule.

(We spoke with one big vendor last week who said they’ve hired a record number of employees to manufacture antennas, transmission line and tower segments; there’s a good question, too, about what happens to that whole sector of the industry once the repack rush ends and demand for new transmission systems drops off.)

Meanwhile in radio… With changes coming to the NAB Show schedule next year (the floor will open on Sunday and close on Wednesday, a day earlier than the longtime schedule), the radio “neighborhood” will largely move from North to Central Hall next year. This year, though, we have a few trends we’ll be watching in North Hall: an increase in virtualization of studios and tech centers, for instance, with traditional consoles starting to give way to more “glass” controls; still more liquid-cooled transmitters and ever-greater efficiency; ever better HD Radio tools to improve analog-digital sync – and who knows what else we’ll spot for you as we hit the floor this morning?

*When the Deane brothers put WJDF (97.3 Orange) on the air in 1995, the class A FM signal helped to fill in what was then a rather empty dial in west-central MASSACHUSETTS, where there had been only a single AM-FM pair serving the Orange-Athol area along Route 2, plus two commercial AMs and two commercial FMs half an hour to the west in Greenfield. 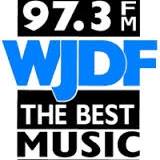 In recent years, WJDF seemed to have fallen on hard times. When we drove through the area last summer, 97.3 was silent, apparently the victim of transmitter failure. WJDF was back on the air when we were in the area again a few weeks ago, but with just a satellite audio feed and not even a local ID at the top of the hour.

That, it turns out, may have been the least of WJDF’s problems: on Thursday, the FCC revoked WJDF’s license and dismissed its most recent license renewal application. The Commission says WJDF’s owner, the Deane Brothers Broadcasting Corp., stopped paying its annual regulatory fees after fiscal year 2013, running up a tab of $9641.73 in delinquent fees. The Commission gives licensees plenty of chances to resolve issues like this – last November, it sent Deane Brothers an order giving it 60 days to respond with either payment or an explanation, but there was no response.

What now? It’s possible that WJDF could still pay those fees and get its license restored, but all evidence right now seems to suggest that the station has faded away to the point of oblivion. Its social media presence was last updated (aside from automated weather postings) last September, suggesting that whatever’s been on the air since has been on autopilot. In an area as economically rough as Orange and Athol, local radio’s a tough slog right now. If WJDF is gone for good, it at least had a good run – and if it does have another life left in it, we’ll let you know.

*Even though the FCC said it intended to take a hard, slow look at FM translators seeking to make multiple hops to new locations, it’s moving with lightning speed on Gois Broadcasting’s relocation of W235CS (94.9 Dedham). That translator moved from the tower of parent WAMG (890) eastward to the WHDH-TV (Channel 7) tower in Newton in early March and promptly filed for another eastward hop, moving to the Industrial Communications tower in Quincy. That application was filed March 14 and the FCC granted it on April 2 – and we think the new 40-watt/150m facility in Quincy will be the final destination for the 94.9 translator, which will cover Dedham, Quincy, Milton and big chunks of Roxbury, Hyde Park and Mattapan.

*And we salute Doug Cope, who’s retired from a long radio career, most recently as a reporter at WBZ (1030 Boston), where he was best known for his “Parent Report” segments.

The move, which reverses a format flip on 92.7 back in 2016, restores a large overlap area for the WOXO format, which will now have coverage all the way from Lewiston up into the mountains on 92.7 and 100.7; for the “Big Z,” it removes the big-signal 92.7 full-power FM, but it retains coverage in the larger communities in the region via the AMs and their translators. (The Gleason family also has sports on WTME 780 Rumford and its 98.3 translator, which are also carrying Sea Dogs games along with 1450/96.9.)

*Syracuse-based Mars Hill Network is extending its upstate NEW YORK Christian radio network eastward with the $600,000 purchase of WDCD-FM (96.7 Clifton Park), adding Albany to a coverage area that already stretches from Rochester to Utica and up to the North Country. The sale marks the end of the Crawford family’s ventures in the Albany market, which started in 1995 with the purchase of then-WPTR (1540) and expanded to FM the following year. Crawford Broadcasting sold both 96.7 and 1540 to DJRA Broadcasting, owned by son Don Crawford, Jr., in 2007; last year, of course, DJRA handed back the license for the 50,000-watt AM signal.

With its Christian talk format, WDCD-FM was an outlier among the younger Crawford’s holdings, which include oldies WLGZ (102.7) in the Rochester market and KAAM (770) in Dallas. The sale to Mars Hill will keep WDCD-FM’s format familiar to its listeners, though programming will now originate from Syracuse instead of the old WPTR facility on Albany Street in Colonie. (That property, including the old 1540 towers and transmitter facility, doesn’t appear to be part of the sale, which transfers only the 96.7 license.)

*Craig Carton is headed to prison for his role in a fraudulent ticket-resale operation. The former WFAN (660/101.9) morning co-host was convicted last November, facing a sentence that could have run as high as 45 years. Prosecutors asked for five to seven years behind bars for the 50-year-old Carton, but U.S. district judge Colleen McMahon handed down a 42-month sentence on Friday. Carton will also serve three years of probation.

*Where are they now? Bob Buchmann left New York City in 2010 for the west coast, where he programmed KLOS in Los Angeles for Cumulus, then joined iHeart in San Diego in 2012 as operations manager and morning co-host on rocker KGB (101.5). Buchmann and co-host Coe Lewis were shifted to afternoons last summer when KGB signed the “DSC” morning show that had been at crosstown KFMB-FM. In a Facebook post last week, Buchmann described himself as being “a lot in shock” at the news that his position in San Diego had been eliminated.

*In PENNSYLVANIA, Jay Dixon is the new PD at Radio One’s WRNB (100.3), WPPZ (107.9) and gospel WPPZ-HD2 (Praise). Dixon has been a consultant the last few years at KBLX in San Francisco and WBLS in New York; his previous PD career included stops at WILD in Boston and several other big urban signals.

*In eastern CANADA, there’s an AM downgrade, at least on paper. After an antenna system failed at CJCB (1270) in Sydney, N.S. a few years ago, the station dropped its night power from 10 kW to just 1350 watts. Owner Maritime Broadcasting System says no listeners complained – and so instead of repairing the night DA there, it’s asking the CRTC for permission to permanently keep CJCB at 1350 watts after dark.

Trevor Doyle is off the air in Fredericton, N.B., suspended from his morning show at Bell’s CIBX (Capital FM 106.9) after he was arrested on child sex charges. Doyle was vacationing in Puerto Rico when the FBI arrested him March 29 as part of an investigation. He’d been on the air at CIBX for 17 years and now faces up to 10 years in prison.

*Listeners to CBC Radio One in Quebec are noticing some changes in the morning: in Montreal, local “Daybreak” host Mike Finnerty is taking a seven-month leave of absence from the show, which airs on CBME (88.5). Saying he needs to “recharge his batteries,” Finnerty plans to be in London for much of his sabbatical; Ainslie MacLellan will be his main fill-in host. And in the rest of the province, “Quebec AM” listeners will be without host Susan Campbell for most of the rest of the year. She’s been off because of medical issues since December.