*From the 1960s until the early years of the 21st century, no signal was listenable in more of the big population centers of New England than Worcester’s WAAF (107.3). Not only was the big rocker listenable almost from end to end on the Mass Pike, its huge reach from the top of Mount Asnebumskit gave it listeners in Providence, Hartford, southern New Hampshire and Vermont, and occasionally even as far as Albany. 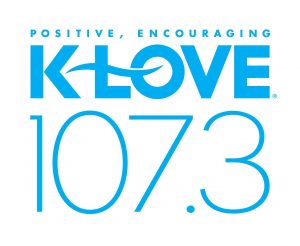 As commercial radio’s business models changed, of course, it became more important for Entercom to focus WAAF’s signal within the Boston market – and so 107.3 left Asnebumskit just after the turn of the millennium, relocating to a new home on the Stiles Hill tower in Boylston, then home to WUNI (Channel 27). It was closer to Boston, yes, but the move didn’t end up giving WAAF that much more “oomph” over the big city when it was all done.

And so it was perhaps a little ironic that the company that ended up buying WAAF from Entercom, EMF Broadcasting, is the sort of noncommercial operator that doesn’t care about commercial market boundaries – and that would have probably loved the out-of-market reach that 107.3 enjoyed from its original signal.

A series of moves on adjacent frequencies meant that EMF didn’t have the option to return 107.3 (now WKVB, licensed to Westborough) to Asnebumskit – but last week, the company made a series of filings designed to modify its signal, with a move and downgrade of its main signal and the addition of three new on-channel boosters.

*The main signal, first: EMF is proposing to relocate WKVB from its present 9.6 kW/335m DA class B signal on the old channel 27 tower in Boylston, moving it to a 2.1 kW/321m class B1 signal, non-directional from a new four-bay antenna on the tower in Hudson that’s home to WUNI (Channel 66). 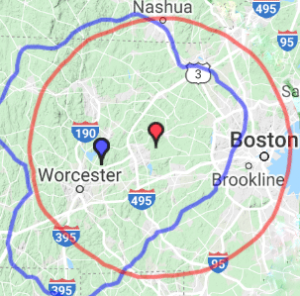 It’s not a huge downgrade, all things considered; while 107.3 will lose even more of its Worcester County coverage than it gave up with the move off Asnebumskit, moving several miles east to the Hudson site will nicely center 107.3’s strongest coverage over a big swath of Boston’s western suburbs and the “MetroWest” region. Giving up the old directional antenna will also push 107.3’s coverage out better toward the Merrimack Valley north of Boston and into the city’s southern suburbs, though that area also hears K-Love quite well from WLVO (95.5 Providence).

(And it’s worth noting, too, that other recent K-Love expansions will fill in the other current 107.3 coverage areas that will be lost – that stretch down the Pike and 395 to the southwest can hear WCCC 106.9 from Hartford, and the area northwest of Worcester can hear WFNX 99.9 from Athol.)

(map via FCCData.org, showing existing contour in blue and proposed new in red)

So why move? It’s not just to push more signal from the main site toward Boston. And it may or may not be related to the future of the tower in Boylston, where 107.3 has been Entravision’s only tenant since the tower owner moved its own Channel 27 signal to a new post-repack digital home in Needham. (Will that tower, now a half-century old, remain in use at all after 107.3 leaves?)

No, there’s another piece, too: just as two other Boston-rimshot FMs, WXRV (92.5 Andover) and WXLO (104.5 Fitchburg), have found success with on-channel boosters closer to the big city, EMF is applying to join them in the booster club.

WKVB filed three applications last week for highly directional on-channel boosters: WKVB-1 would run just 1.5 watts from the John Hancock Tower in Boston’s Back Bay, aimed east over downtown and East Boston; WKVB-2 would be a 190-watt signal sharing WXLO’s booster antenna in Lexington, at the old WCOP-FM 100.7 site; and WKVB-3 would be a 265-watt signal, aimed east-southeast from Bear Hill in Waltham over Watertown, Newton, Brookline and much of Boston.

If and when all the pieces come together, EMF would have a mesh of K-Love signals on 107.3 that would be strong across MetroWest, the western suburbs and well into the city.

*A Boston-market AM that’s been on the market for well over two years is being donated to a nonprofit operator.

WKOX (1430 Everett) was the odd signal out in the 2017 deal that spun several stations from the Entercom/CBS Radio purchase off to iHeart Media. In order to acquire WBZ (1030) and WZLX (100.7) from CBS and WRKO (680) and WKAF (97.7) from Entercom, iHeart had to send one signal into a spinoff trust to stay below FCC ownership caps.

As the least of iHeart’s AM holdings, little WKOX was the obvious choice to be spun off; its syndicated talk format moved back to its prior home on WXKS (1200 Newton) in early 2018 after Bloomberg’s lease of that signal ended, and the trust operator, Ocean Station Trust II LLC parked a Spanish-language hits format on “Rumba 1430” while it looked for a buyer.

Two years later, the 1000-watt 1430 signal is being donated to Delmarva Educational Association, the nonprofit religious broadcaster controlled by the Epperson family, which also controls the for-profit Salem group.

The donation of WKOX doesn’t include the lease at the Revere Beach Parkway site that has been 1430’s home since it signed on as WHIL in the 1940s; that site was sold to tower operator Vertical Bridge, and remains leased out to now-silent WILD (1090).

(Ironically, iHeart’s current Medford studio location is in an office park constructed right where WILD’s original tower used to be. But we digress. As usual.)

Fortunately for 1430, Salem just happens to own another tower site just down Route 16 – and we wouldn’t be at all surprised if the future of the 1430 signal involves a move just to the west to diplex with Salem’s WEZE (590).

*We’re still learning more about the cuts that many Saga markets took over the last couple of weeks, including one more in Portland, MAINE. John McDonald, who’d been doing weekend mornings at news-talk WGAN (560/98.5) for a quarter century, had initially been put on hiatus as the station tried to keep most of its staff out of the studio during the pandemic, but now his separation is permanent.

Over at Binnie Media, Corey Garrison takes over from Stan Bennett as PD of WTHT (99.9 the Wolf) in Portland. Garrison, who’d also been the Wolf’s MD, remains on the air in the afternoons.

*In CONNECTICUT, Full Power Radio has new calls for one of its venerable AM stations. WMMW (1470 Meriden), which has used those calls since it signed on back in 1947, quietly took the new calls WBOM. Does that reflect an impending format change from its current news-talk simulcast with WDRC (1360 Hartford) to John Fuller’s Spanish-language “Bomba” format?

(And if it does, will 1470’s CP for a new translator on 102.5 on Rattlesnake Mountain replace the current Hartford-market “Bomba” on 104.5? Especially if Fuller succeeds in knocking another 102.5, Manchester’s WYPH-LP, off that frequency for good – which would allow the Rattlesnake translator to lose a deep directional notch to the east with which it’s now saddled.)

*Cumulus Media is doing rolling furloughs as it, too, copes with the revenue falloff from the pandemic. Its employees will end up with three weeks without pay, one week a month between now and July. And while the details of those furloughs aren’t being publicized in most markets, we know a little more about what’s happening in western NEW YORK thanks to the Buffalo News’ Alan Pergament.

He reports that the furloughs will include the big morning shows at each of Cumulus’ three FMs in Buffalo: WEDG (103.3)’s Shredd and Ragan will likely run best-of shows during their furlough weeks, as will WGRF (97 Rock)’s Rich “Bull” Gaenzler. Joe Siragusa might move from afternoons to cover Bill Lacy’s WHTT (104.1) morning show when he’s off, and PD John Hager might cover for WGRF afternoon jock (and chief engineer) Carl Russo.

*Forever has taken a while to settle in to one of its newest markets, Lebanon, PENNSYLVANIA, but last week it finally made a big change at half of the AM-FM combo it acquired there early this year.

After paying $1.225 million for news-talk WLBR (1270) and AC WQIC (100.1), Forever had largely left the stations alone – until it flipped WLBR at 9 AM Tuesday. Make all the “Mr. Ed” jokes you’d like, and you’ll be in good company among the industry wags talking about Forever’s new moniker, “WiLBuR 1270.”

As for sister station WQIC? It changed calls to WFVY once Forever took over, but is still using the “WQIC” branding and soft AC format for now.

*An hour or so to the east, WNPV (1440 Lansdale) signed off at the end of the night Thursday, ending almost 60 years of local radio service to the North Penn Valley area in Montgomery and Bucks counties.

After several hours of live farewells during the station’s usual morning and mid-morning shows, WNPV went to its usual roster of syndicated fare through the afternoon and evening, then cut out of Clark Howard’s show a couple of minutes before midnight for a recorded farewell from Wendy Hunt, one of the family owners of the station, followed by the standard signoff announcement and the national anthem.

What next? For the moment, just silence on 1440 and its 98.5 translator, though there’s still hope a buyer might emerge for the signals.

*In Philadelphia, WXPN (88.5)’s big annual music festival, the “XPoNential Music Festival,” is yet another casualty of the pandemic. On Thursday, WXPN announced that the event – held just across the river in Camden, NEW JERSEY– won’t happen this year, when it was scheduled to take place July 31-August 2. WXPN says it’s hoping to be back, stronger than ever, in 2021.

Over at Radio One, cutbacks from the pandemic included afternoon jock Dyana Williams at WPPZ (Classix 107.9), where middayer Lady B moves to afternoons from 2-7 PM.

*And a belated obituary in Erie: Gary Drapcho, who was a fixture on the city’s TV screens for years as sports director for WSEE (Channel 35) and its “Erie News Now” partner WICU (Channel 12), died April 15, two weeks after he suffered a heart attack.

Drapcho joined the WSEE staff as a sports reporter in 1984 and became sports director a decade later, traveling to national events and covering Erie’s local pro teams and school sports. He was just 63.

*One of the newest AM stations in CANADA will stay in testing mode for a while longer. CFAJ (1220 St. Catharines) had already obtained several extensions as it reactivated the facilities of the defunct CHSC, which lost its license over allegations it was trying to be a Toronto station.

Last year, the CRTC extended an April 2019 deadline to April 20 of this year – and while CFAJ at least managed to get a new transmitter in place and begin test broadcasts from CHSC’s old site, the new station says it’s been delayed in getting a studio built and full-time broadcasting underway because of the pandemic.

CFAJ’s new operators say “Grapevine 1220” still plans to start regular broadcasting within three months – but just in case, they’re asking for a six-month to one-year extension to get the programming going (and to get the signal boosted from its temporary 1000 watts, nondirectional, to the licensed 10 kW DA.)