In this week’s issue… WMEX is back: will this time be the charm? – More AMs succumb to pandemic downturn – Crash kills Canadian radio vet – CRTC Kisses off power increase

*It’s taken Ed Perry much longer than expected to make his dream a reality – but barring any further catastrophes, pandemics, construction delays or other obstacles, this morning will at long last mark the official debut of his revival of Boston’s WMEX (1510).

It’s been two and a half years since Perry bought the 1510 license (and not much else), and more than two months since the original March 9 date Perry had planned for the return of a separate oldies format to WMEX. The AM signal is now licensed to Quincy and running 10,000 watts by day, 100 watts at night, diplexed from one tower of the WBIX (1260) array, almost within sight of the old Quincy site that WMEX used in its heyday, when it was one of the city’s top-40 giants.

That 1510 signal later was relocated to Waltham with a directionally-challenged 50 kW and an impossible monthly tower site rent. When the towers were razed, 1510 went silent and might well have just disappeared entirely, had Perry not stepped forward to buy the license. Since returning to the air, the new WMEX has mostly been simulcasting Perry’s flagship station, WATD (95.9 Marshfield), and it will continue to simulcast with WATD for morning drive and at night.

But after having that March 9 start date delayed by the onset of the coronavirus pandemic, Perry is finally ready to bring on the oldies and an airstaff of Boston radio veterans.

Here’s how it plays out: Larry Justice will take the airwaves at 9:15 AM, when the WATD simulcast ends, broadcasting live from his home studio in Florida. Joe McMillan, live from Maine, will be heard from 2-6 PM weekdays. On weekends, the WATD simulcast will break away at 8 AM for oldies with Jimmy Jay, running until noon on Saturdays and 1 PM Sundays.

There’s more yet to come from Perry: WMEX’s 101.1 translator has yet to hit the air, and plans for a shipboard launch party this month have obviously had to be scrapped.

And Perry’s other WATD simulcast, which broke away for a while this winter before the pandemic forced it back to a full simulcast, will start programming independently again next month: that’s WBMS (1460/101.1) in Brockton, which has targeted June 22 for the return of the separate programming it dropped in late March.

*Radio People on the Move in upstate NEW YORK: James Kurdziel is getting a promotion within Cumulus, which is moving the WEDG (103.3 the Edge) PD/middayer from Buffalo to Minneapolis to become PD of KQRS (92.5), replacing Scott Jameson there. Kurdziel already serves as regional VP/rock for Cumulus’ northeast stations, and he’ll keep that role when he moves. 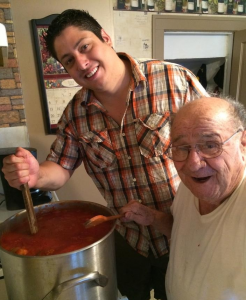 And iHeart in Rochester has now posted an opening for the producer position that had long been held by cluster mainstay Pauly Guglielmo. Guglielmo, whose duties included producing the Brother Wease show on WAIO (Radio 95.1), announced last month that he’s leaving iHeart to focus fulltime on the pasta sauce business, Guglielmo’s, that he started in 2014, not long after arriving in Rochester from the then-iHeart cluster in Ashtabula, Ohio. (Unsolicited testimonial: it’s really good sauce!)

Guglielmo recently signed a deal to buy a local food-processing plant to take over his own manufacturing of the sauce, which had been made under contract by another plant in town – and at a time when we’re all cooped up and eating lots of pasta, we wish him lots of success with his growing venture!

*In Syracuse, EMF has changed calls on the station it bought from Cumulus almost a year ago. WXTL (105.9) was one of the rare stations where EMF kept a previous commercial callsign (just as it did for its biggest purchase as part of the Syracuse deal, New York’s WPLJ) – but once EMF picked up WKLZ (98.9) up in northern Michigan from Roy Henderson a few months ago and flipped it to its Air 1 format, it couldn’t resist moving that “KL” call to a “K-Love” signal, and so 105.9 in Syracuse is now WKLZ.

*While getting ready to mark the departure of longtime morning news anchor Randy Price later this week, Boston’s WCVB (Channel 5) is about to have an even bigger job to fill. Bill Fine came to WCVB in 1982, the same year Hearst bought the ABC affiliate, and while he’s moved around within Hearst several times, he’s been in the top position at 5 TV Place since returning to Boston in 2005 as VP/general manager.

Fine, who’s only the fourth general manager in WCVB’s 48-year history, told staffers in an email Thursday morning that he’ll retire sometime later this year, allowing plenty of time for a smooth transition for his successor, who’s yet to be named.

“Half of my life has been spent at WCVB, resulting in countless fond memories and friendships that will never fade. To have the honor of making my life’s work with Hearst, witnessing this wonderful Boston institution provide such an extraordinary service to our community — my beloved hometown — is a dream fulfilled,” he wrote to staffers.

Fine leaves big shoes for his successor to fill: he was named Broadcaster of the Year by the Massachusetts Broadcasters Association in 2016, GM of the Year by Broadcasting and Cable in 2013, and he led the station to an entire lobby’s full of national awards.

*And out on Cape Cod, UMass Boston’s WFPB (1170 Orleans) wants to move to a new site of its own a quarter-mile from its existing transmitter site – and it wants to go from its present daytime 670 watts (on a tall tower) to 1000 watts on a new “HEBA” (High Efficiency Broadcast Antenna,” just like the one WFPB engineer Grady Moates has been experimenting with for several years out at WGFP (940 Webster).

“We are working hard to keep listeners informed and entertained during this challenging time,” the station told listeners on its Facebook page; will separate programming come back once things start getting back to normal?

*In central PENNSYLVANIA, the hole left behind when Jeff Hurley became part of iHeart’s national programming team in January is being filled with a local promotion in Harrisburg.

Josh Wolff, PD of WZZO and WAEB-FM (B104) in Allentown, has been promoted to VP/programming for the Harrisburg and Lancaster markets, overseeing a group of stations that includes country “Bob” WRBT (94.9), AC “River” WRVV (97.3), top-40 WLAN-FM (96.9) and news-talk WHP (580). Wolff came to Allentown last year from iHeart in Phoenix, where he was APD/marketing director for two of its big FMs there.

*A national tragedy in CANADA has a radio connection in two eastern markets: Captain Jenn Casey, who died when a Canadian Forces Snowbird plane crashed in Kamloops, B.C. Sunday, was a radio news anchor and producer in Halifax (CJNI News 95.7) and Belleville (CJBQ/Quinte Broadcasting) before joining the Canadian Forces as a public affairs officer in 2014.

Casey (known on the air as Jennifer Howell when she was at CJBQ) was part of the “Operation Inspiration” program that was taking the Snowbirds aerobatic team from coast to coast to boost morale among Canadians during the pandemic.

*In Toronto, the CRTC has turned down a bid from Rogers’ CKIS (Kiss 92.5) to boost power. The station has struggled for its entire existence with cross-lake tropospheric interference from a much older occupant of the same channel, WBEE-FM in Rochester. Back in 2002, it won CRTC permission to boost power from 4.7 kW average DA to 9.87 kW average DA from its site on First Canadian Place in downtown Toronto, later modified to 9.1 kW – but because CKIS operated with horizontal-only polarization while WBEE’s 50 kW signal from across the lake was circularly polarized, the move didn’t help alleviate incoming interference, and Kiss reverted to the 4.7 kW signal it had used since 1990.

Last year, Rogers tried again, telling the CRTC it needed to go to 9 kW average/21 kW max DA at 496 meters from First Canadian Place, on the grounds that the extra power would alleviate incoming WBEE interference in outlying areas of the Toronto market to the east and west of the city.

Having been granted higher power before, this application was going to sail through – right? Anyone following the intricacies of the CRTC probably knew better, and sure enough, the agency denied the application last week, saying Rogers “has not demonstrated a compelling technical need justifying the requested technical changes,” since the need for the improvement was only in CKIS’ secondary coverage contour.