*If you’re trying to make money – or at least avoid losing money – keeping a big AM signal running on the weekends, the odds are that you’re playing it safe these days, with talk reruns or paid programming filling most hours. You’re probably not handing over three hours of airtime to an octogenarian top-40 DJ to break format and play the hits of the 60s and 70s, complete with vintage jingles, the hassle of music licensing, and so on.

So it’s a good thing indeed that when John Catsimatidis’ Red Apple Media took over NEW YORK‘s WABC (770), he could afford to do something other than just play it safe. Come Labor Day, “Cats” will be using his new toy to have some Saturday night fun, returning the legendary “Cousin Brucie” Morrow to the airwaves just a few weeks after SiriusXM ended his long run on its 60s on 6 channel.

“Cousin Brucie’s Saturday Night Rock ‘n’ Roll Party” will run from 6-9 PM on WABC and its East End simulcast, WLIR (107.1), starting Sept. 5, with the inaugural show getting a WABC rerun on Labor Day Monday at noon. 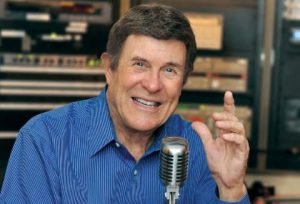 “Brucie is a national treasure and talent,” said Catsimatidis in the release announcing the new show, which he’s touting as a nationwide offering by way of WABC’s streaming and its other digital platforms.

Will WABC make money off the new Saturday night music show? Probably not much – and maybe not even as much as Cumulus made from infomercials in the slot. But as a vehicle for reminding listeners that WABC’s still there and maybe even worth paying some attention to? It’s already paying off: even the stodgy New York Times took note of Morrow’s addition to the WABC schedule, and when was the last time the Times covered its local radio scene?