*As the year draws to an end (we’ll have one more regular NERW issue on Dec. 20, and then stay tuned for our big 2020 Year in Review package in the days to follow), we’re hopeful the ongoing iHeart job cuts are also winding down.

Before they’re all over, though, there’s more news to share of good radio people losing their gigs through no fault of their own. 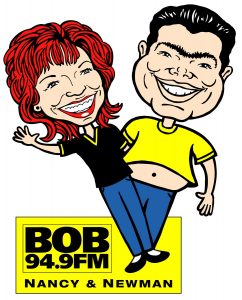 Take iHeart’s Harrisburg country station, for instance – WRBT (Bob 94.9) has had Nancy Ryan as part of its morning show since it launched the country format in 1997, and even before that, Ryan was a Harrisburg fixture at 94.9’s earlier oldies incarnation, “Kool” (and when Kool was on 99.3, too.)

In 2001, she was paired with Bob Newman (“Bob’s New Man”), who later became Bob’s PD as well, and ever since then it’s been “Nancy & Newman” in morning drive. Now Ryan is out, and it’s not clear what Newman’s status is – we’re told he’s off the air, though he’s still listed as solo host on the WRBT website.

*We know there have been more cuts in Erie, too: Scot Mark (“Woody”) is out as production director and afternoon host on WRKT (Rocket 105), replaced for now by a replay of the “Mojo and Allan” morning show that is the only local shift remaining on the classic rocker.

*And if you’re looking for local political talk in the morning in politics-crazy RHODE ISLAND, iHeart’s WHJJ (920 Providence) is no longer the place to turn. Ron St. Pierre, who started at WHJJ as program director way back in 1982, had been back at the station since 2013 in morning drive.

As of last week, the Rhode Island Radio Hall of Fame inductee is out – and WHJJ listeners who tune in from 6-10 AM are instead hearing Jim Polito, whose morning show based at WTAG (580) in Worcester had already expanded regionally a couple of years ago with a simulcast on WHYN (560) in Springfield.

Polito’s a talented host, but will Rhode Island listeners want to hear his discussions of Massachusetts politics? (Or vice versa, if he starts bringing up topics from the incredibly parochial Ocean State political scene?)

The move leaves WHJJ with no local weekday hosts, which makes it hard to see it as much competition these days to the big gun across town, Cumulus’ WPRO (630)/WEAN (99.7).