In this week’s issue… Vermont loses a radio legend – End of the road for “Franken-FM”? – From “Kat” to “Cat” – Another AM downgrade

*It was a quiet week in NERW-land, and your editor was away all week (hence the slightly later than usual publication of this week’s issue), and we almost weren’t going to publish this week at all – but we couldn’t let another week go by without paying tribute to the broadcasting legend VERMONT lost last week. 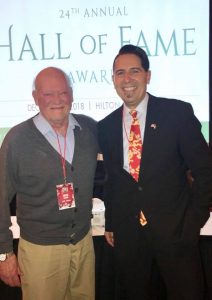 Ernie Farrar had the kind of career you simply don’t get to have these days: after starting his radio career in St. Albans in the 1960s, he jumped to Burlington’s WVMT (620) in 1967 and never left.

At WVMT, Farrar became the voice of mornings for generations of Vermonters, waking them up for decades with the sort of full-service morning show that’s quickly become history in so many places. For the last 20 years of his WVMT career, Farrar was paired with a younger co-host, Chris Papillo (shown at right); both hosts announced their departure from the station at the end of 2018 as it prepared for a change of ownership.

Farrar’s other career was in boxing, as the longtime director of the Vermont Golden Gloves competition, he was also a legend in that arena, inducted into the Vermont Sports Hall of Fame as well as the Vermont Association of Broadcasters Hall of Fame. Other honors included the name of the road that led to WVMT’s former studios, which was long designated “Ernie Farrar Drive.”

In recent years, Farrar had jumped back into his old hobby of amateur radio, where he was W1EF, as well as spending time with his large family. Farrar died July 7, at 78. Visiting hours will be held July 22 from 4-7 PM at the Heald Funeral Home in St. Albans; Papillo will host a celebration of Farrar’s life on July 23 at 11 AM, in front of a crowd expected to be large enough that it’s taking place at the Collins-Perley Sports Complex in St. Albans.