Every once in a while, there’s someone in this crazy business of ours who transcends the personal conflicts and petty nonsense that too often characterizes the broadcasting business – someone who’s universally recognized as being “one of the good ones.”

Whether you knew him as “Willie B. Goode,” “Cliff Trucker Kenyon,” “Mike Rivers” or “Gnarly Charlie,” Alton Irwin was that guy, and his death last week leaves a void in the hearts of radio people from his native southern New England all the way to south Florida. 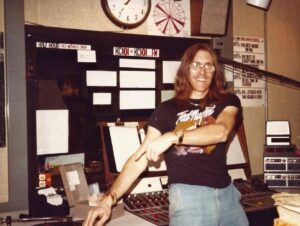 Irwin’s radio career started in the early 1970s in CONNECTICUT, where he worked early on at WNLC in New London, WCCC in Hartford and most notably at WAVZ and the start of WKCI in New Haven. His energy transferred across multiple formats, whether it was country (“Kenyon”) or top-40 (“Smokin Willie B. Goode”), and it quickly propelled him to bigger markets, including WPJB in RHODE ISLAND, WHTT in Boston, and by the early 1980s at WPLJ/WWPR and WHTZ (Z100) in NEW YORK City. (photo: Jerry Kristafer via Facebook)

It didn’t matter whether he was working nights or weekends or just as a fill-in – once you met him, you were a friend for life, especially once he’d moved south to the Miami market, where he worked at WKIS, WFLC (Coast 97) and WMXJ and taught at the Connecticut School of Broadcasting. Always active on social media, he was constantly reminiscing on his earlier radio days and sharing good wishes with fans – right up until Saturday, when his daughter Alannah posted news of his death.

No memorial plans have been announced yet, but Alannah Irwin says her father wanted no funeral, just a “celebration of life” to be held at a later date. In the meantime, she says, “Take the time to listen to some of his favorite bands/artists. He loved the Beatles, Chuck Berry, Buddy Holly, and pretty much anything from the 50s, 60s, and 70s. Listen to it ‘cranked up to 11′.’