*It may not be one of the most prominent stations on the dial in NEW YORK City these days – but that’s exactly why WADO (1280) is changing hands as part of a $60 million spinoff of 18 stations in ten markets from TelevisaUnivision. 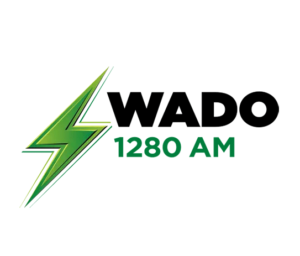 When it went to full-time Spanish language broadcasting 60 years ago, WADO controlled a hefty share of that market, occupying a spot on the “Spanish Main” adjacent to its two main competitors, WBNX (1380, now WKDM) and WHOM (1480, now WZRC).

In more recent years, though, WADO has struggled in ways that parallel the difficulties faced by its English-language AM counterparts. Most of the Spanish-language audience began moving to FM in the 1980s, led by SBS’ WSKQ-FM (97.9) and eventually followed by WSKQ’s sister WPAT-FM (93.1) and by WADO’s eventual FM sister, originally WCAA on 105.9 and now WXNY on 96.3.

After trying various news and talk formats, WADO went to sports a few years ago, first as part of the now-defunct Univision Deportes network and now as part of the national TUDN network, where it’s settled in with ratings in the 0.5 range, down in the noise with other smaller AMs and suburban FMs.

Now, however, change is coming to WADO and its sister Univision-owned AMs in Chicago, Los Angeles, Miami, Dallas, Houston and several other markets.

So who is “Latino Media Network” and what are they planning with their acquisitions, which also include FM signals in Las Vegas, Fresno, and McAllen, Texas (where Univision will exit all three markets completely) and one Dallas rimshot FM?

The “who” in this case may be easier than the “what” and the “why”: led by entrepreneurs Stephanie Valencia and Jess Morales Rocketto, LMN boasts a group of board members and advisors that includes actor Eva Longoria, longtime Univision TV anchor Maria Elena Salinas, former Florida GOP chair Al Cardenas and other prominent names, mostly in the progressive-leaning Hispanic community.

Funding sources for the deal include debt financing from an investment fund tied to George Soros – and that prominent progressive name has lit up some corners of the opinion sphere, wondering what the political lean of LMN’s new signals might look like.

“Through the unique combination of creative content and new and existing media platforms to serve our community, we can embrace cultural pride and collectively empower Latinos,” said Valencia in the announcement of the deal Friday. “We hope to create relevant content for radio and other audio platforms with content that our community can trust and rely on,” said Rocketto – and if you read carefully between the lines, at least part of the intent behind the purchase starts to emerge.

While WADO and most of Univision’s other AMs are mostly carrying sports, the deal includes the company’s two AMs in Miami, sports WQBA (1140) and talk WAQI (710). “Radio Mambi” is one of several AMs in Miami that have garnered some attention even in Anglo circles for their overtly political talk shows that have become central to Republican, Trump-influenced electoral hopes in south Florida, traditionally a Democratic stronghold.

If Rocketto, Valencia and LMN hope to counter that swing, they’ll have some obstacles to overcome. In Miami, WAQI is just one player in a market with even more conservative competitors (which have been criticized in recent years for promoting electoral misinformation) – and the politics of Miami are uniquely Cuban, so any programming designed to move the needle in south Florida is unlikely to resonate in New York’s Dominican and Puerto Rican communities, or the Mexican communities of Chicago, Texas and Los Angeles.

It’s also not clear that LMN will be able to immediately make big changes at WADO and its other new stations; the deal includes a one-year transition period during which Univision will continue to operate the LMN stations, likely with TUDN content remaining on the air. (We also don’t know what the fate of WADO’s deal to carry Spanish-language Yankees broadcasts will look like under LMN.)

If the deal is a clear win for anyone, it’s for TelevisaUnivision, which gets to shed most of its underperforming radio assets while keeping its more successful signals. In New York, that’s just one remaining FM station; after the recent sale of WQBU (92.7) to Family Stations, the sale of WADO will leave Univision with just “La X 96.3,” which battles back and forth with WPAT-FM for the number two spot in Hispanic ratings.