*What can we possibly say about the greatest voice of baseball on the radio who ever lived that hasn’t been said a dozen times over in the last few days, since news broke Tuesday night that Vin Scully had died in Los Angeles?

Scully became the soundtrack of southern California summer evenings over six decades calling games after the team moved west in 1958, earning every accolade that baseball and broadcasting could possibly bestow on him, of course.

We, however, are a northeast broadcasting column, and so we’ll remember him here for the earliest part of a career that more than spanned most of our lifetimes. (As others have noted, Scully called games that included players born as early as 1916 and manager Connie Mack, whose baseball career started in 1886!) 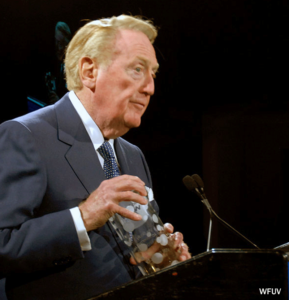 The Bronx-born Scully grew up in northern Manhattan nestled under the family’s living room radio, dreaming of becoming an announcer. After two years in the Navy, he began making that dream come true as a student at Fordham University, where he helped to put WFUV (90.7) on the air as one of the first college FM signals. Scully called his first games on WFUV, when he wasn’t playing for the college baseball team, serving as sports editor of the newspaper or singing in the Fordham barbershop quartet.

After finding work out of college at WTOP in Washington, Scully rose fast, helped along both by his abundant natural talent and perfect timing – he caught the ear of Red Barber, the star voice of CBS’ sports coverage, who used him on college football coverage and brought him into the Brooklyn Dodgers’ booth in 1950 to work alongside Barber and Connie Desmond after Ernie Harwell’s departure for Giants baseball broadcasts.

Scully’s style, heavily influenced by Barber’s impartial approach and his use of crowd sound, was perfectly suited for both radio and the rise of TV sports. As for his timing? At age 25, he was there in the right place when Barber couldn’t come to terms with Gillette, the sponsor for NBC’s 1953 World Series TV coverage, and so it was Vin Scully who brought TV viewers the Yankees-Dodgers action that fall, becoming the youngest announcer to call the Series, a record that has never been broken.

The next spring, Barber had moved to the Yankees booth and Scully took over as lead announcer for the Dodgers’ broadcasts on WMGM (1050) and WOR-TV (Channel 9).

The rest, of course, is baseball history: he stayed with the Dodgers when they left Brooklyn after the 1957 season, passed up a chance to return to New York in 1964 to replace Mel Allen on the Yankees’ broadcasts, and settled in for an astonishing 67 seasons before retiring in 2016 at age 88. By then, his reputation was national, including decades of network World Series broadcasts on radio and TV and a long run calling NFL games on NBC in addition to the Dodgers.

Scully’s reputation with younger broadcasters was legendary, mentoring generations of new voices. Back home in the Bronx, Fordham inaugurated the Vin Scully Lifetime Achievement Award for sports broadcasting in 2008 in the only way possible, inviting Scully back as the inaugural recipient as WFUV marked its 60th anniversary. (Photo courtesy WFUV)