*Our last regular issue of NERW for 2022 begins with an ending, and a new beginning.

On Friday, Scott Shannon and Patty Steele signed off, ending eight years of mornings on NEW YORK‘s WCBS-FM (101.1) and, for Shannon, the better part of four decades of early alarms in the big city. 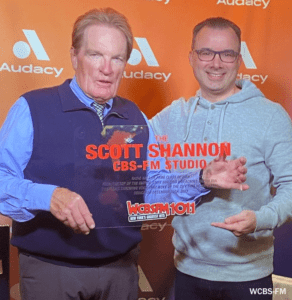 Friday’s show was, as long planned, the show’s annual fundraiser done live on location at Blythedale Children’s Hospital in Westchester County, so it was the Thursday show that was really the last regular “Big Show” in the studio. About that studio? It’s now the “Scott Shannon CBS-FM Studio,” with a plaque remembering Shannon’s career.

Who’ll fill that studio after the holidays? A familiar name in the city’s radio history, one with deep ties to much of today’s CBS-FM staff and even to the Hudson Street building. John Foxx started his career up in Poughkeepsie at WSPK in 1999, then worked in Albany, Colorado Springs and Dallas before Cumulus brought him to New York in 2012 to program WPLJ (95.5) during an era when Shannon was doing mornings and Race Taylor, also now at WCBS-FM, was on later in the day.

Foxx outlived WPLJ, staying with Cumulus as program director of WNSH (94.7), which brought him to Audacy when Cumulus swapped the station in 2019. After WNSH’s demise, Foxx remained with Audacy as senior VP for country and most recently as PD of KILT-FM in Houston.

In February, he’ll return to Hudson Street not only as the new morning man but also as WCBS-FM’s brand manager, as well as programming the old WNSH country format, now on the HD2 of what’s now WXBK (94.7 the Block). That will free up Jim Ryan, who’s been overseeing WCBS-FM programming while serving as SVP/programming for the entire cluster and PD for sister station WNEW (102.7).

Who else will be on the new CBS-FM morning show? We’re hearing another former Cumulus name may be in the mix when it debuts.

As for Shannon, his final shows left little doubt that he’s not retiring, just looking for his next role. Where might that be? We’ll keep following closely when NERW returns the week of January 2, 2023.