How do you end a 41-year career at the helm of one of the top morning shows in the country?

We’re guessing Matt Siegel of WXKS-FM (Kiss 108) would have liked something a little more dignified than Tuesday morning’s rushed farewell. 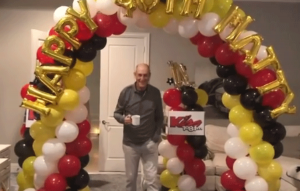 After two weeks off the air, the iHeart top 40 station teased a “special announcement” from Matty that played out a few minutes into the 8 AM hour, in which the 72-year-old Siegel told listeners he’s had a tough year that has included brain surgery. Siegel said his family had noticed him sounding “cranky” on the air, something he’s never wanted to be – and as a result, he said, “it’s time” for him to retire, effective immediately.

Siegel went on to praise his current and former co-workers and talk about his new life as a bad golfer in Florida. Throwing the broadcast back to co-host Billy Costa and producers in Boston, there was a lengthy snippet of a Donnie Wahlberg interview from Siegel’s 40th anniversary show a year ago, a couple of produced liners wishing Siegel well, and — well, that was apparently that for 41 years that took Kiss from an obscure former beautiful music station into the disco era and then established the station as the biggest top-40 voice in New England.

What happens next on Kiss 108 mornings, where Costa just told listeners he’s “honored to be inheriting this giant show”? And was this really Siegel’s choice to go out so abruptly? There’s surely much more to this story, and we’ll be here to cover it as it evolves.