On the face of it, Tuesday morning’s news that Gannett is splitting its print and TV operations into separate publicly-traded companies was just a little more of the same: it was just a day earlier that Tribune completed a similar split of its own, following on the heels of broadcast/print splits at Scripps, Journal and the one at Belo that landed most of that company’s former TV unit in Gannett’s hands just a few months ago.

These splits, when handled well, can make plenty of sense. In Gannett’s case, the company’s existing (and substantial) debt gets transferred to the new broadcast unit, which will get a new name. That leaves the company’s legacy newspaper operations to start their next chapter effectively debt-free, which is a big deal at a time when Gannett has managed to pare back expenses at many of its newspapers enough to give them a shot at being profitable as stand-alone operations. (Gannett has, for instance, been extremely aggressive about selling off the big old downtown buildings that aren’t especially well suited for its current slimmed-down, digital-focused newsroom operations.)

And in a regulatory universe where Comcast can buy NBC and then, very likely, turn around and swallow Time Warner Cable – but in which the 1970s prohibition on newspaper-TV cross-ownership remains stubbornly in effect – the split may free the separate Gannett operations to better explore the potential of newspapers and TV newsrooms working together, even as it pulls some existing cooperative agreements apart. Here in Rochester, for instance, it’s not at all uncommon to see the Gannett-owned Democrat and Chronicle carry a story from nearby Buffalo with a byline from Gannett-owned WGRZ-TV (Channel 2), or for a D&C Bills reporter to appear on a WGRZ pregame show (which, at least in the case of last weekend’s Hall of Fame Game, was also streamed to Rochester audiences on the D&C website.) In Phoenix, Gannett moved NBC affiliate KPNX (Channel 12) into the Arizona Republic building, and it will be interesting to see if that gets untangled now.

(Elsewhere in NERW-land, Gannett’s TV holdings include Maine’s NBC affiliates, WCSH Channel 6 in Portland and WLBZ Channel 2 in Bangor, as well as WGRZ; in the newspaper universe, Gannett is a major player in upstate New York, the Hudson Valley and central and southern New Jersey.) 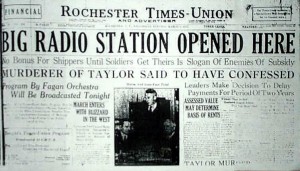 But we can’t say goodbye to Gannett without a quick look back at the company’s extensive broadcasting history, which stretches back to the dawn of radio right here in Rochester. The now-defunct Times-Union was Frank Gannett’s second paper, as well as the location of his corporate headquarters until the 1980s, and it was an early player in radio. In March 1922, Gannett hired a young local engineer named Laurence Hickson to build radio station WHQ at the Times-Union‘s downtown building. The station was not a success: the steel frame of the building absorbed much of the signal, and after just a few weeks on the air Gannett shut WHQ down and sold the equipment to Kodak founder George Eastman. He secured a new license and relaunched the station later in 1922 under the familiar calls of WHAM – but Hickson stayed in the game himself, building WABO at the Lake Avenue Baptist Church and then his own commercial station, WHEC (“Hickson Electric Co.”) in 1925.

WHEC would become a much more enduring part of Gannett’s broadcasting legacy after being sold to the newspaper company in 1936. For four decades, Gannett operated WHEC radio and then WHEC-TV (Channel 10) completely separately from its newspapers in Rochester. It also added radio to newspapers in other markets: in Elmira, where the Star Gazette was Gannett’s first paper, WESG was a joint venture between Gannett and Cornell University. After the university took sole control of the WESG license (renamed WHCU), Gannett stayed in Elmira with WENY (1230) until the late 1960s. Down the road in Binghamton, Gannett’s Evening Press owned WINR (680) and WINR-TV (Channel 40, now WICZ-TV) from 1957 until 1971, sustaining the UHF station in a difficult position against top-rated VHF outlet WNBF-TV (Channel 12, now WBNG). Other early Gannett radio holdings included stations in Olean (WHDL) and Hartford (WTHT, tied to the Hartford Times until both station and newspaper went defunct in the mid-1950s.)

That early chapter of Gannett broadcast history is all but forgotten now; after spinning off the last of those early assets, WHEC-TV, in 1978, the company jumped into radio and TV in a much bigger way in markets outside its core newspaper holdings. The 1979 purchases of Combined Communications’ TV and radio holdings instantly made Gannett a major electronic media player with stations such as KIIS/KIIS-FM in Los Angeles, KSD/KUSA in St. Louis and WXIA-TV in Atlanta, later augmented by key additions such as WUSA-TV in the company’s new home base of Washington. While the radio stations are all gone now, Gannett never looked back on its way to its current status as one of the biggest TV station groups in America.

Want this kind of insight into the back story of media in the Northeast, every single week? Subscribe to NorthEast Radio Watch for as little as 29 cents a week! Click here to learn more.