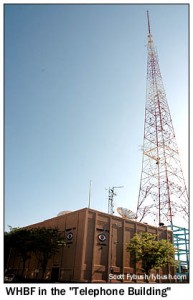 This week’s installment takes us to another one of the sites featured in Tower Site Calendar 2013 by way of part of a recap of what we’ll call “Medium Trip 2007.” That was a 10-day family journey that began and ended in Chicago, taking in much of Iowa and a little of eastern Nebraska along the way, and in the process revisiting for the first time some of the territory from our original Big Trip back in 2001.

On that trip, we spent most of a day driving around to nearly all the sites in the Quad Cities market, including the tall TV towers on the southern edge of the market, 20 miles south of Rock Island, Illinois.

Having done that six years earlier, we were able to limit our Quad Cities radio tourism this time around to a few select sites, which was a good thing, since we were on a tight schedule that found us pulling into town rather late at night and departing the market fairly early the next morning.

First on our list of things to get a better look at was the concrete bunker in downtown Rock Island that’s home to CBS affiliate WHBF (Channel 4), which we’d seen only in the dark on our 2001 trip. Alas, it didn’t look any less monolithic by daylight, though we at least thought we’d figured out in the meantime why the building looked that way: we’d thought we’d seen old references calling it the “Telephone Building,” and it certainly had that “old central office” look to it. The story turned out, after some additional research, to be even more interesting than that. It was the “Telco Building,” named for the drugstore that occupied the ground floor after a 1950 renovation – and lurking under all that dull stucco are the bones of the 1911-vintage Rock Island Savings Bank building. Who knew?

That self-supporting tower next to the building is apparently still a channel 4 backup site; we’ll see later on where WHBF’s transmitter ended up in later years.

From Rock Island, we crossed the bridge to downtown Davenport, Iowa (which was still a toll bridge in 2001, but had since become free), and made a beeline for 805 Brady Street, near the top of a hill overlooking the Mississippi River.

This building, home to NBC affiliate KWQC (Channel 6), looks pretty much the same as it did back in 2001, but in the meantime we’ve learned a lot more about its history, thanks to the Unofficial WOC Broadcast Center Homepage that went up in the meantime. Go check it out – it’s chock-full of pictures from the 1963 opening of the building, back when it was home to then-WOC-TV, as well as WOC (1420) and WOC-FM (103.7). On a future trip, with more time to spare, we’ll have to stop in and see how the building has changed since the radio stations moved out, the film chains disappeared and the computers came in.

Our next stop was a TV studio we missed in 2001: up on 53rd Street in suburban Davenport, we found the unimposing studios of Grant Broadcasting’s Fox affiliate, KLJB (Channel 18) and its CW sister station, KGCW (Channel 26).

Continuing east on 53rd Street into Bettendorf, then turning south on I-74, we were soon within sight of what’s probably the most interesting transmitter site in the Quad Cities. Back in 1952, the WOC stations bought a big piece of land at Middle Road and Devils Glen Road to build a state-of-the art facility for their AM, FM and TV transmitters, and all of those stations are still there today, even as callsigns and ownerships have changed.

The original 1952 piece of this site is the three-tower array seen at the left, above: this is the WOC (1420) array, which would be a fairly conventional three-tower, 5000-watt DA-1 setup, but for one thing: that 624-foot center tower, which appears in FCC records as a sectionalized tower with a center insulator (180 degrees over 145 degrees). I didn’t seee any evidence of sectionalization, but then again I didn’t get very close to that tower, so that’s a mystery to be pursued on a future visit.

The rightmost tower in that picture of the AM array isn’t actually part of the AM array: it’s a 551-foot tower, built in 1978, that’s used by religious WDLM-FM (89.3 East Moline IL).

Then there’s the tall tower on the site: a 1381-footer that went up in 1982 for WHBF-TV (Channel 4) and what was then still WOC-TV (Channel 6). WHBF had apparently moved around the market a bit by then, going from the tower behind the Telephone Building to a taller site in the TV/FM antenna farm down in Orion, IL (still used by the former WHBF-FM 98.9, now WLKU) to this site in Bettendorf. WOC-TV and WOC-FM (103.7) had been on the center tower of the AM array, as best I can tell.

A quarter-century later, channels 4 and 6 are still here, sharing an antenna at the top of the tower. WHBF-DT (Channel 58) and KWQC-DT (Channel 56) are here, too, side-mounted a bit lower down on the tower. Between them is a whopper of a 14-bay antenna for the former WOC-FM on 103.7, which was later KIIK-FM, then oldies KUUL. In 1998, it swapped calls and formats with sister country station WLLR-FM (101.3 East Moline), and for almost a decade now, country WLLR on 103.7 has been one of the top-rated stations in the market, with a huge class C (91 kW/363m) signal.

There’s another FM here, too, just below WLLR: public radio WVIK (90.3 Rock Island) operates with 31 kW/334m from this tower.

That wrapped up our morning’s return visit to the Quad Cities – but there was still much more Iowa to cover on this particular late-May Thursday, as we pointed the rental car west on I-80 and up I-380, past Iowa City and Cedar Rapids, a market we’d return to later in the trip.

Our destination for the day was Mason City, which we’ll profile in next week’s Tower Site, but we made a few detours along the way to see some really tall pieces of steel. Everything from Iowa City clear up past Waterloo (a distance of more than 70 miles) is part of one big TV market, and covering that market requires big towers, most of them perched in the rolling hills north of Cedar Rapids and east of Waterloo, off Iowa 150 north of the little town of Urbana. We got fairly close to one big one – the 1355-footer that KGAN-TV (Channel 2) built when it moved off its original tower right in Cedar Rapids (we’ll see that a few installments from now) – and very, very close to an even bigger one. ABC affiliate KCRG-TV (Channel 9) built its 1926-foot tower in 1974, and the site is now shared with Iowa Public TV’s KRIN (Channel 32) and the University of Northern Iowa’s KUNI (90.9), as well as DTV signals KCRG-DT (Channel 52), KRIN-DT (Channel 35) and KGAN-DT (Channel 51).

After a brief stop in Waterloo for lunch (we’ll come back to this market later, too), we continue up US 218 toward Mason City, with one more stop to make along the way. This is the two-tower array for KWAY (1470) in the small town of Waverly, with one tower also supporting the antenna for KWAY-FM (99.3), which programs a top-40 format that rimshots Waterloo, 20 miles or so to the south.

And it’s KWAY that’s featured in the new calendar, a nice reminder in this chilly winter season of the warmth of central Iowa in the summertime…

Want your own image of KWAY, and a dozen more great sites? Tower Site Calendar 2013 is shipping right now, in time for Christmas, from the all new Fybush.com store! Order now and be one of the first to have your copy…why wait? (We’ve also got the very last FM Atlas copies available for sale, and the new edition of the National Radio Club’s AM Log.)