by Scott Fybush
in Free Content, New York, Tower Site of the Week
0

We’re taking a break from the fall 2018 Florida pictures we’ve been posting the last few weeks, because we can’t post a Site of the Week on this particular date without paying homage to the biggest of the six Cumulus stations changing hands this evening in that huge transaction sending them to EMF to become satellite-fed K-Love outlets.

It’s been a few years since we’ve last been inside New York’s WPLJ, so this week’s encore edition is something of a time capsule of how much has changed in a dozen years in Market #1.

Before we dust off that Site of the Week edition featuring WPLJ’s transmitter site, though, we have a few pictures we’ve never shown you here before: a quick visit to the studios at 2 Penn Plaza, 17 floors above Penn Station.

Yes, those were carts all over the place back then – as I recall, it was a Scott Shannon morning show thing, back when he was doing mornings here – but from the photos we’ve seen more recently, not much about the layout of this studio changed from 2005 until WPLJ’s final days.

And while these studios fill up with WPLJ alumni taking their last turns on the air, we fast-forward a year from 2005 to 2006 and this visit we made to the WPLJ transmitter site at the Empire State Building, first published here in December 2006:

We begin, as so many of our previous Empire visits have begun, on the 85th floor, riding up from the 80th floor with all the tourists and then confusing the heck out of them by getting out of the elevator before the 86th floor observation deck. Little do they know what they’re missing: the 85th floor, as we’ve noted in the past, is one of the most significant spots in the history of American broadcasting. From our vantage point in front of WPLJ’s doorway, we look down the hall to the room that used to be Univision’s WXTV (Channel 41), but was originally the very first studio facility for NBC television, way back when this building was brand-new in 1931 or so. Back then (and I’ve seen the drawings), the east end of 85 housed both the studio and transmitter for W2XBS, the NBC television station that evolved into WNBT and eventually to today’s WNBC(TV).

NBC vacated most of that space when the World Trade Center went up, keeping only one small room on the northeast corner of 85 that is today home to a combiner for the new DTV master antenna at Empire and another room on the south side of 85 that was home to its WYNY 97.1, and is today home to WQHT 97.1 and its sister Emmis stations. The room that was the reception area for NBC in 1931, just to the right of the green doors at the end of the hallway, is today the combiner room for the many FM signals that use the ERI master antenna near the top of the Empire mast. 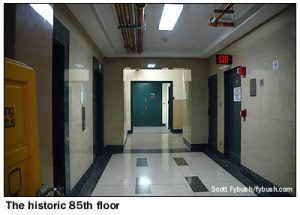 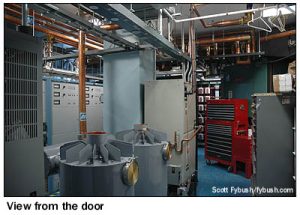 But our story this week is about another FM station, though one with distant ties to NBC. When NBC was forced to sell its Blue Network in 1943, the spinoff included the Blue Network’s flagship in New York, WJZ. And while the new ABC network lagged behind NBC and CBS when it came to television, it still staked out a claim in the Big Apple, putting WJZ-TV (Channel 7) on the air in 1948. Since NBC then controlled the Empire State Building’s mast, WJZ-TV began its career uptown, transmitting from the Hotel Pierre at 61st Street and Fifth Avenue. That’s where WJZ-FM came on the air, too, more as an afterthought than anything else. In 1950, WJZ-TV moved to Empire, and by 1951, WJZ-FM was there as well. The stations became WABC-TV and WABC-FM in 1953, but it would be another 13 years before anything would be heard at 95.5 beyond a simulcast of WABC (770).

After flirtations with the “Love” progressive rock format, WABC-FM became a rock station in its own right by 1970, and at year’s end, it borrowed the title of a song called “White Port and Lemon Juice” to establish its own identity as WPLJ. A few years later (probably around the time that WABC-TV moved south to the World Trade Center, vacating the space it had shared with the FM), WPLJ moved in to the little room on the northwest corner of 85.

In late 2001, WABC-TV came back to Empire under the least favorable circumstances possible, temporarily jamming a low-power transmitter into the cramped WPLJ room just to have someplace to operate. With its old antenna aperture near the top of the Empire mast having long ago given way to the ERI master antenna, WABC-TV needed space on the mast, too. Within a few months, a new WABC-TV antenna was in place in the slot where WPLJ’s own antenna had been. (WPLJ, like the other two FM stations once affiliated with network O&O TV stations in New York – NBC’s 97.1 and CBS’s 101.1 – had never taken part in the master F M antenna projects at Empire.) 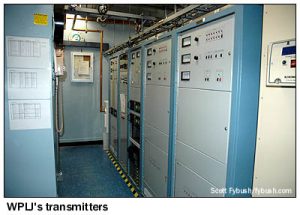 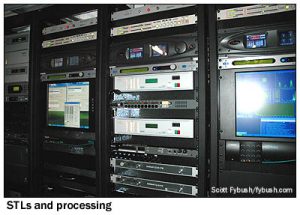 WPLJ temporarily ended up diplexing with 97.1 (now Emmis’ WQHT), but over the longer term it joined forces with WQHT and WCBS-FM to build a new “mini-master” antenna, a one-bay/four-around ERI panel mounted just below the two-bay/four-around master near the very top of the mast. And once WABC-TV moved out (it now has space of its own downstairs, in areas converted from office space after 9/11), WPLJ embarked on a full renovation of its room. 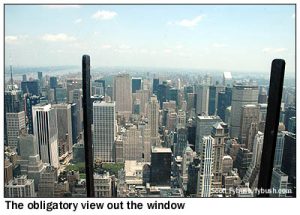 The results are fairly simple and elegant, considering the small space into which WPLJ is wedged. As with ABC Radio’s other New York stations, Nautel is the transmitter brand of choice, and there are two of everything here in order to provide as much redundancy as possible – a pair of exciters in the transmitter rack (below), multiple audio and telemetry paths over to the studios at Two Penn Plaza, four long blocks to the west, multiple paths across the Hudson to WPLJ’s auxiliary transmitter site at the Armstrong tower in Alpine, N.J., even separate Omnia-based processing chains for each transmitter. (It’s true, we’re told, that there was once a processing rack here that had a locked panel on it marked “Don’t You Wish You Knew” – this was, and is, a market where processor settings are state secrets, and it’s true that WPLJ is one of the most distinctive-sounding stations on the FM dial anywhere.)

The long rack along the north wall, perpendicular to the transmitters, also houses WPLJ’s RDS encoders and its HD Radio encoders. This was the first station in New York to add an HD3 multicast, and now WPLJ offers streams of both 70s and 80s music in addition to its hot AC main channel. 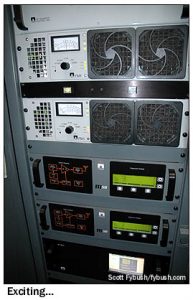 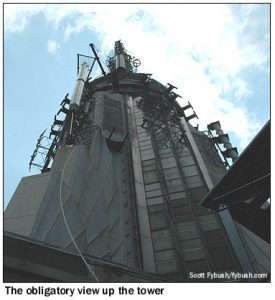 Between the transmitters and the racks, there’s not much more room in here for anything – in fact, the racks completely block the spectacular view out the north-facing window – but there are a few vestiges of earlier WPLJ incarnations here. To the right of the door as we walk in, wrapping around a wall to a narrow “L” behind the elevators, are a pair of Shively filters that were part of the distributed combiner system put in when WPLJ was sharing WQHT’s old antenna.

The combiners (analog and HD) for the new mini-master antenna are two floors up from here, in a cramped space above the 86th floor observation deck that’s known variously as the “86th floor mezzanine” and the “87th floor,” and which apparently was used for many years by New York Telephone for microwave relays.

A few feet above the public outdoor deck on 86, it’s a good spot to get a view up the mooring mast to the many new TV antennas that showed up here after 9/11, as well as to the 1965-vintage Alford FM master antenna, the T-shaped bays around the 102nd floor observation deck. And above that, of course, are the many antennas packed on to the main mast, including (way up there, out of sight from this vista) the WPLJ mini-master…

2019 update: A lot has changed here in 13 years. The 85th floor walls aren’t green anymore, for one thing – and the view up and out has changed dramatically. The Alford master antenna was just recently removed, the mooring mast has been extensively redone with new panels and lighting, and up above, the antennas on the mast have changed almost completely. The mini-master and ERI master are still there, but there’s now a new auxiliary antenna just above the 102nd floor at the base of the mast, carrying all 18 of the FM stations that call Empire home, including WPLJ. And of course the view looking north out the window is now full of new super-tall condo buildings, some rivaling the height of Empire itself.

Thanks to Kevin Plumb of WABC/WPLJ (and now ESPN) for the tour!

And don’t miss a big batch of new IDs next Wednesday, over at our sister site, TopHour.com!