by Scott Fybush
in Free Content, Nevada, Tower Site of the Week
1

Our preview of the brand-new Tower Site Calendar 2013 (just back from the printer and now shipping!) continues this week with another one of the sites featured in the new calendar: “Black Mountain Arden,” in Henderson, Nevada.

Back in the spring of 2006, our annual April visit to Las Vegas for the NAB Show found us fulfilling two of our longtime tower-hunting goals: we went up the hill to the Black Mountain Henderson site that’s home to most of Sin City’s FM stations and a few of its TVs – and then the next day, we took the even longer, bumpier ride up Mount Potosi, one of the nation’s legendarily remote big-city FM sites. 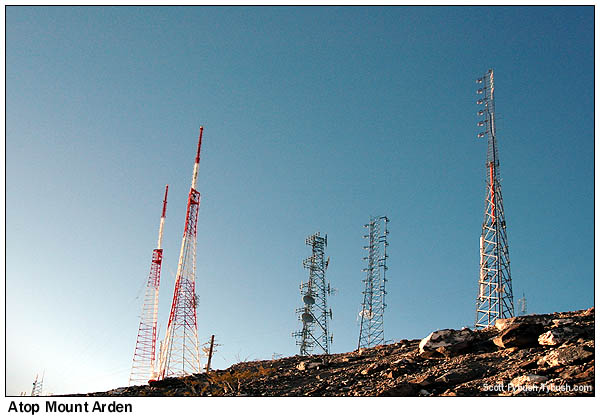 But those trips still left us with some holes in our Vegas FM/TV coverage, which is why we were delighted, a year later, to get an invitation to go up the third major mountaintop site in the market, the small cluster of sticks about four miles south of Black Mountain Henderson known variously as “Black Mountain Arden” or simply as “Mount Arden.”

At 4330 feet or so above sea level, the top of Arden provided a big increase in height when the first TV stations started moving up here from their original towers on the valley floor in the late sixties and early seventies. As best I can reconstruct the history, the first station up here was ABC affiliate KSHO (Channel 13, now KTNV), which moved up here in 1969 from a tower that still stands behind its Valley View Drive studios (which had in turn replaced the original site at the El Rancho casino.) The KTNV tower is the second from left in the photo above – and judging by the phone number on the “Restricted Access” placard at the gate, KTNV continues to control access to the mountaintop 40 years later.

Howard Hughes’ CBS affiliate, KLAS-TV (Channel 8), was the next to go for Arden’s height, around 1971, trading its old tower behind the Desert Inn casino for the tower seen at left in our view of Mount Arden above. (KLAS had held at least an application to develop remote Mount Potosi for TV use, but never built that out, which is understandable given the challenges of getting even a simpler FM site there built two decades later.)

It took a while for channels 8 and 13 to get company up here. The Las Vegas FM dial, as late as the mid-seventies, was made up of a handful of underpowered class C signals operating from short towers in town (though one expert of our acquaintance tells us those sites actually worked quite well to cover the market as it then existed), and it wasn’t until the very end of the decade that the first FMs came up to Arden: KVEG-FM (92.3, later KOMP), KORK-FM (97.1, later KYRK and now KXPT) and public radio KNPR (89.5), with the latter two operating from a site downhill from the TV towers, near a former telco microwave site on the road to the peak.

By the early nineties, those FMs had all departed, moving up to the newly-developed Mount Potosi site, but in their stead came a batch of low-power TVs, a few FM translators, and eventually a few new full-power stations. On the FM side, KSTJ (102.7) was a class A station on 105.5 over in Boulder City, 30 miles southeast of town, before shifting to its current frequency and class C status in the late nineties; over the past few years, it’s changed calls (to KFRH) and formats (to “Fresh FM” and now to “Now FM”) several times. Its six-bay antenna, at the tower on the right side of our wide shot at the top of the page, sits atop antennas for a few other fairly recent additions to the mountaintop. There’s Entravision’s KINC (Channel 15/DT 16), a Univision affiliate, and Sinclair’s KVCW (Channel 33), which started as independent KFBT; its DTV outlet on channel 29 is over on the Black Mountain Henderson site.

So what does the site look like now? The once-rural approach to the road has now been replaced with the mammoth Anthem residential development that sprawls south of St. Rose Parkway and I-215, and today (or at least two years ago), the access to the road up the hill is via an unmarked gate between two houses at the end of an Anthem cul-de-sac. The road twists and turns past the old FM site, which saw new life a few NAB shows ago when it was used to originate an experimental DRM signal on 26 MHz, before arriving at the plateau where the big towers sit. When we get inside the gate there, we see the big block buildings for KLAS and KTNV, a few smaller buildings, and behind a gate at the west end of the plateau, another big building that’s home to the UHF stations and 102.7. (Perhaps not for long, though; 102.7’s owner, Beasley, has a CP to move the station north to the Black Mountain Henderson tower farm where most of the other FMs are located.)

We didn’t get inside the big TV buildings on this trip (maybe on a future visit?), but we did see the interiors of a couple of the smaller ones. While KOMP and KXPT have long since moved their main transmitters up to Potosi, they maintain lower-powered backups here, in the old 97.1 building, in the event that the power goes out at the remote Potosi location. There are LPTV transmitters here and in the building next door, including the fairly high-powered KTUD-LP (Channel 25), which was once the UPN affiliate in the market and which still enjoys cable carriage as indie “Vegas TV.” There are also several FM translators and rimshot boosters, including KRRN-FM-1 (92.7), KVGS-FM-1 (107.9) and eventually KHYZ-FM-2 (99.7), bringing the “Highway Station” into Las Vegas.

As for the big VHF TV towers, they’re now crowned by stacked antennas for analog and digital TV. KLAS-DT is on channel 7, and KTNV-DT is on 12; in fact, when Arden is combined with the TV sites at the nearby Black Mountain Henderson site, every high-band VHF channel is now full in the market (KLAS-DT 7, KLAS analog 8, KVVU-DT 9, KLVX analog 10, KLVX-DT 11, KTNV-DT 12, KTNV analog 13.)

2012 update: KLAS and KTNV stayed on 7 and 12 after the DTV transition; today, Arden is also home to full power KINC on 16 and a bunch of low-power analog and digital signals. It’s also now home to another full-power FM: Lotus moved KWID 101.9 over here from the Black Mountain Henderson site after acquiring the station from Clear Channel a few years ago. And 102.7 never moved; it’s now in Beasley’s hands as country KCYE, and continues to transmit from Arden.

Thanks to Bill Croghan for the tour!

It’s that time of year! We’re now shipping the all new Tower Site Calendar 2013 fromthe all new Fybush.com store! Order now and be one of the first to have your copy…why wait? (We’ve also got the very last FM Atlas copies available for sale, and the new edition of the National Radio Club’s AM Log.)