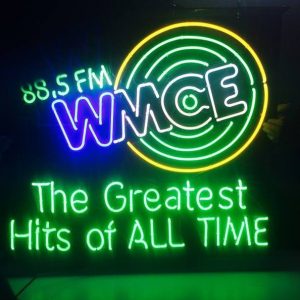 *A distinctive radio voice in northwestern PENNSYLVANIA will be making a jump to the commercial FM world over the next year. It’s been four years since Mercyhurst College’s WMCE-FM (88.5 Erie) dropped its jazz format to go oldies under the leadership of “Captain Dan” Geary, picking up the format of then-sister AM WYNE (1530 North East).

After agreeing last fall to sell off the AM signal (which is headed to Inspiration Time, Inc.), now Mercyhurst has reached a deal that will take WMCE-FM back to student operation while sending Captain Dan and the oldies format to The ERIE Radio Company’s new 100.9 construction permit.

As regular NERW readers know, that 100.9 class A signal, which will be licensed to Westfield, New York, was created by Connoisseur’s long-pending move of WRKT (100.9 North East) up the dial to 104.9, which finally appears poised to reach completion.

So here’s how it will all play out over the next year or so: by January 20, 2018, Connoisseur has to build out its 104.9 CP for WRKT, moving that B1 signal from its current home just across the New York line over to the much closer tower of sister station WRTS (103.7 Erie). Once “Rocket” makes its move, Rick Rambaldo’s ERIE Radio will then be able to build out the replacement 100.9 signal – at which point the new 100.9 will simulcast with WMCE-FM on 88.5 for a little while so that listeners can move over.

It’s not yet clear what Mercyhurst will then do with 88.5; its existing staff, including Geary, will move downtown to ERIE Radio’s streetfront studio to join Rambaldo’s existing station, WEHP (Happi 92.7).

*One of the biggest deals in local TV ownership closed last week, giving yet another set of owners to the NERW-land stations that used to belong to LIN Television. The LIN stations merged into Media General at the end of 2014, and barely two years later most of Media General has now been swallowed up by Texas-based Nexstar in a $4.6 billion transaction.

In New England, Nexstar already owned or controlled Burlington/Plattsburgh’s Fox affiliate WFFF (Channel 44) and ABC sister WVNY (Channel 22), and now it makes some big additions with the former LIN/Media General portfolio – NBC affiliate WWLP (Channel 22) in Springfield, ABC affiliate WTNH (Channel 8)/My affiliate WCTX (Channel 59) in New Haven/Hartford and CBS affiliate WPRI (Channel 12)/Fox affiliate WNAC (Channel 64) in Providence. There’s at least one management change that comes along with the ownership change – at WTNH/WCTX, Richard Graziano is the new VP/GM, returning to Connecticut after an earlier stint at the helm of the Hartford Courant.

In Pennsylvania, Nexstar doesn’t add anything to its existing holdings in Erie (WJET/WFXP), Altoona (WTAJ), Wilkes-Barre/Scranton (WYOU/WBRE) or Harrisburg (WHTM), but it is shuffling management – Robert Bee heads from WYOU/WBRE down I-81 to WHTM to become VP/GM there, which moves Steve Daniloff up to VP/GM in Wilkes-Barre, where he’d been director of sales.

And congratulations to former WROC-TV GM Tim Busch: as part of the Nexstar expansion, he moves up from overseeing Nexstar’s eastern markets to becoming president of Nexstar Broadcasting nationally.

*Back in NEW YORK, it’s been a month of signal problems for WNYU (89.1) at New York University. It suffered a transmission line problem on December 19 that knocked off its main signal, which comes from a tower at Bronx Community College. With its 8.3 kW main signal off the air, WNYU has remained alive through streaming and through its 5-watt booster, WNYU-1, at the main NYU campus in lower Manhattan.

On Long Island, Nick Parker is out of afternoons after seven years at WALK-FM (97.5 Patchogue) as the station goes in a “more music” direction. Will Connoisseur end up tracking that airshift from one of its Connecticut stations? 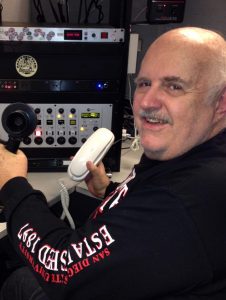 *Big congratulations go out to WBEN (930 Buffalo) traffic king Allan Harris: two months after an attempted kidney transplant had to be called off because of problems with the donor organ, Harris again was called to Rochester’s Strong Memorial Hospital on Thursday when another kidney became available. This time, there were no hitches, and Harris is now recuperating from the transplant operation.

*Radio People on the Move in CONNECTICUT: Shane McKenzie has departed evenings at Hall’s WCTY (97.7 Norwich), clearing the way for Josh Mattei to move from overnights and creating an overnight opening at the 24-hour-a-day live operation.

At Quinnipiac University’s WQUN (1220 Hamden), former WPLR voice Ray Andrewsen takes over today on the morning shift; he’ll be followed by PD Pam Landry in middays and Brian Smith in the afternoon. 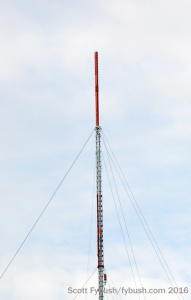 *In eastern MASSACHUSETTS, the TV stations that share the master antenna in Needham were on temporary standby antennas once again last week as a panel of the upper master antenna was hastily shipped back to Maine so manufacturer Dielectric could make yet more repairs.

Last Monday, climbers went up the tower to fix a nitrogen leak in one elbow of the transmission line, only to discover that there was another leak elsewhere in that troubled upper antenna. Weather prevented a planned removal of the damaged antenna bay late Wednesday night, but on Thursday night the bay came down and was rushed to Dielectric. On Friday night, the bay was reinstalled and by early Saturday morning the antenna was back up and running at full power for WBZ-TV (Channel 4), WCVB (Channel 5), WSBK (Channel 38) and WGBX (Channel 44). Will this be the end of the difficulties broadcasters have had with that antenna? We’ll be watching (and we imagine there must have been some particularly nervous moments at WBZ-TV, what with that Patriots playoff game on the schedule for Sunday night.)

*Over at Entercom’s WEEI-FM (98.5), sportswriter Alex Reimer is now a “brand personality,” a new gig that will involve continued rotations into the guest chair on the Kirk Minihane/Gerry Callahan morning show, blogging, podcasting and writing for WEEI.com.

Over at Salem’s WBIX (1260), local talker Dr. Grace Vuoto has disappeared from the schedule, where her weekday 9-noon slot is now occupied by the syndicated Mike Gallagher. Vuoto was in the unusual position of competing with her husband, WRKO’s Jeff Kuhner, on the crowded Boston talk dial.

*Back in PENNSYLVANIA, Randy Savage (real name: Bruce Murry) moves north from Renda in Fort Myers, Florida to take over as OM for Cumulus in Wilkes-Barre/Scranton. He’ll oversee all five formats in that cluster (AC WMGS, country WSJR, top-40 WBHD/WBHT, rock WBSX and sports WARM) as well as serving as PD and afternoon jock on “NASH FM” WSJR. Savage replaces Mike Vincent, who left those duties last fall to go to Cumulus’ cluster in Melbourne, Florida.

In Somerset, Forever changes calls on WLLI (990), which becomes WNTI to match sister news-talker WNTJ (1490 Johnstown); the WLLI calls are headed to the former WTJW (1390 Jackson TN), where they’ll match a new “Willie” country format down there.

*On the NEW JERSEY shore, WJSE (106.3 North Cape May) looks to get a little more signal northward with a move to the old WIBG-FM (94.3) tower in Middle Township; from there, the station’s new 3.3 kW/137m class A signal would put less signal over Delaware Bay and a little more toward Ocean City.

Up the shore in Atlantic City, Jennifer Knight is out as middays/APD/music director at WAYV (95.1); no replacement has been named yet.

*In CANADA, there’s a format change coming to RNC Media’s CHXX (100.9 Donnacona); Steve Faguy reports the Quebec City-market station will move from rock to classic hits as “Pop 100.9,” matching the branding of sister station CFTX (96.5 Gatineau) in the Ottawa market.

Our travels last week took us through Kitchener, Ontario, where religious CJTW is on the move: it’s still on the air with its old 50-watt signal on 94.3, but it’s also now testing its new 420-watt signal at 93.7.

Just down the dial in Toronto, the CBC has applied to add a subcarrier to its CBL-FM (94.1 Toronto) that will carry “TIME FM” Tamil-language programming.

Over in First Nations territory, CJKS (93.5 Ohsweken) is now on the air; its 75-watt signal is branded as “JUKASA Radio.”

And Dan Sys’ Canadian Radio News reports calls for two new stations: Bayshore Broadcasting’s new “Country 102.3” in Bracebridge will be CJMU, while Radio Humsafar’s new 1350 in Brampton will be CFKA.