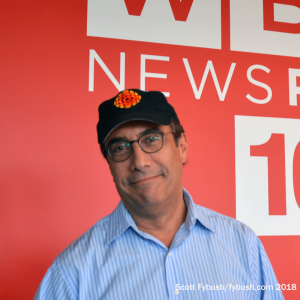 *It’s another one of those weeks when we really don’t want to be writing the lead story we’re writing.

It’s MASSACHUSETTS again, and it’s our old home base of WBZ (1030) – and it’s another round of job cuts on both the news and talk sides of that iHeart-owned stations. While the most visible face of the cuts was news anchor Josh Binswanger, recently moved from mornings to afternoons (right – and yes, that’s a classic CBC logo hat he was wearing when last we saw him in the new WBZ newsroom last summer), there were plenty of WBZ staffers behind the scenes who were also affected.

When your editor arrived at the WBZ newsroom as a kid right out of college in 1992, my training as a tape operator was at the hands of Vic Ramos, who’d already been at WBZ a few years by then, having moved east from his native Los Angeles and then-sister station KFWB. Vic remained as a producer in the newsroom long after the carts and reels went away (as well as taking a lead role in union negotiations), right up until those cuts hit late last week.

Also behind the scenes were producers Garo Hagopian (whose tenure also went back to the mid-90s, when he ran Steve LeVeille’s show and the almost-famous “LeVeille/Hagopian Poll”) and Fausto Menard, writer Carolyn Firestone and reporter Bill Marcus.

And back on the other side of the mic, the cuts also claimed several of WBZ’s part-time weekend talk hosts, including Dean Johnson and Marissa DeFranco, leaving only Morgan White, Jr. on the part-time talk roster. What’s going to fill those weekend slots? On Sunday night, the station was running classic Larry Glick shows as filler.

Station officials told the Globe they couldn’t discuss personnel matters, but they did say no replacement has been picked yet for Binswanger, who returned to WBZ amidst fanfare in 2017, coming back for a second run after starting his career there in the 1990s as the host of the weekend “Kid Company” show.

(Down the hall, we’re also hearing that Kesha Monk, co-host of the morning show at WKAF 97.7, is also out at iHeart.) 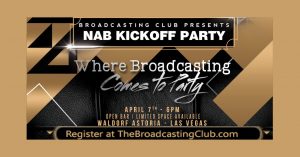 *In happier news (and we need some happier news after that), we’re very happy to announce the location of this year’s annual Broadcasting Club Kickoff Party at the upcoming NAB Show.

Our event just keeps getting bigger year after year, and this year it will expand to the newly-renamed Waldorf Astoria at the Las Vegas CityCenter complex on the Strip. As always, it’s the Sunday night before the show starts (April 7), starting at 6 PM – and as always, you need to register (at TheBroadcastingClub.com) to get the email letting you know where to go on the day of the party.

And did you hear our latest edition of the Top of the Tower Podcast? We were on the road last week, visiting America’s first all-digital AM station, WWFD (820) in Frederick, Maryland, and had a most interesting conversation with engineer Dave Kolesar and Xperi’s Mike Raide – give it a listen if you missed it!

*Down the road in Worcester, the U.S. Attorney’s office is taking a new tack in its fight against a particularly persistent pirate operator. Vasco Oburini and the Christian Praise International Church are the target of a civil action in federal court in which the government wants an injunction keeping them off the air. The feds say Oburini’s pirate operated first on 102.3 and then on 97.1, receiving multiple warnings and a $15,000 fine

“When they choose to operate illegally, and continue those operations after being warned multiple times, action must be taken,” said U.S. Attorney Andrew Lelling. 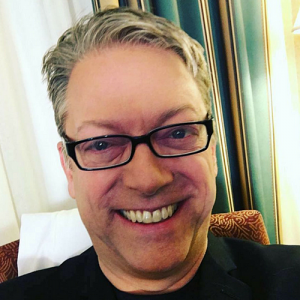 *In NEW HAMPSHIRE, WOKQ (97.5 Portsmouth) is looking for a new morning host. Bill Fox, who arrived in 2017 from WYJB in Albany, lasted exactly two years at the Townsquare country station, but his contract wasn’t renewed and his last day on the air was last Tuesday (March 5). Fox is looking for a new morning gig, and Kira Lew is handling WOKQ’s mornings solo in the meantime.

*Radio People on the Move in NEW YORK: WNEW (102.7) night jock Christine Richie is now acting music director after the exit of APD/MD Fabi Pimentel. She’s left the Entercom station after 17 years, apparently to work outside of radio.

We send our best wishes to veteran radio guy J.C. Coffey, who’s on the move out of the OM position at Community Broadcasters’ Elmira-Corning cluster and off to a new gig that we hear will be announced soon.

*In the Olean market, there’s a call shuffle at Andrulonis Media: currently-silent WVTT (96.7 Portville) takes the WAGL calls, while WAGL (103.9 Eldred PA) becomes WVTT ahead of its transfer to Bath-based Family Life Ministries.

Up north, listeners won’t notice any change – but behind the scenes, the “K-Love” outlets in the Plattsburgh area are changing hands. Carl Auel’s American Educational Broadcasting put WKVJ (89.7 Dannemora) and WKYJ (88.7 Rouses Point) on the air and has been running them as affiliates of EMF’s K-Love network; now they’re part of a $1.85 million sale in which EMF is buying them outright from Auel, along with several full-power K-Love signals in Texas and Arizona and translators in Texas and Nevada.

*In the Hudson Valley, Bill Draper was an important part of the engineering community for decades, and we share the sad news, belatedly, of his death back on February 9. Draper served in the Air Force before getting into broadcast engineering in 1957 in Sarasota, Florida – but he served most of his career at WKIP in Poughkeepsie and its eventual iHeart sister stations, right up until his retirement in 2018.

*In PENNSYLVANIA, Chris Stigall is out after more than eight years in mornings at Entercom’s WPHT (1210 Philadelphia).

“It’s not goodbye, just so long for now,” he told fans on Facebook, saying he’s parting with WPHT “on good terms.”

For now, it’s a rotating roster of fill-in hosts in morning drive on WPHT, leading into the remaining regular weekday lineup of Dom Giordano, Rush Limbaugh and Rich Zeoli.

(And no, there’s no reason to think Stigall’s exit is a sign of any bigger changes at the talk station; with all-news KYW and sports WIP rounding out Entercom’s dominant spoken-word lineup in Philadelphia, there aren’t really any other directions in which the company could usefully take the 1210 signal.)

*Radio People on the Move: at Seven Mountains’ WFEQ (98.7 the Freq) in State College, Dave Snyder is out as PD and morning man, with rumors swirling of an impending format change at the AAA/alt-rock station. In unrelated news, PD/afternoon jock Phil “PK” Kurawinski left Times-Shamrock’s “Alt 92.1” (WFUZ) in Wilkes-Barre/Scranton on Friday for an as-yet-unannounced new gig; that station is looking for a replacement.

*Is a format change imminent down the road in Hamilton? Over at RadioInsight, Lance Venta’s keen eye for domain registrations has turned up a new one for “Energy 95.3,” which would be a return of that rhythmic top-40 format in place of AC “Fresh” at Corus’ CING (95.3).

(“Energy,” of course, came from CING’s prior incarnation at 107.9 in Burlington, now classic rock CJXY – and was at one time also heard on outlying stations in Barrie and London.) 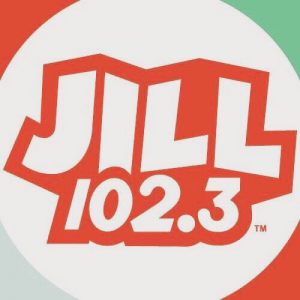 *It was International Women’s Day on Friday, and Rogers’ “Jack” stations, including CHST (102.3 London), CJET (92.3 Smiths Falls) and CFLT (92.9 Halifax), all marked the day with all-women playlists and a one-day nickname switch to “Jill FM.”

*A few new goodies for your radio bookshelf: veteran Toronto Blue Jays announcer Jerry Howarth got busy after his retirement last year, writing a new book, “Hello Friends! Stories from My Life and Blue Jays Baseball,” that was released last week. Howarth has been sharing stories from his 36 years with the Jays all over Canadian media outlets, including this interview last weekend with Michael Enright on CBC Radio’s “Sunday Edition.” 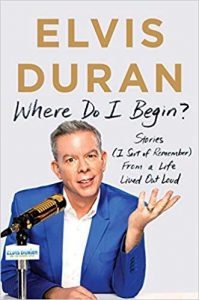 Stateside, we’ll have to wait until October 5 to read the memoir from iHeart’s veteran morning host Elvis Duran, who released his title and book jacket on the air last week. “Where Do I Begin?” is now on pre-sale, and if it’s anywhere near as engaging as Duran is in person, it should be a good read.

*And of course we join the rest of the media world in sending only the very best wishes to longtime “Jeopardy!” host Alex Trebek after he disclosed last week that he’s suffering from Stage 4 pancreatic cancer.

We mention him here at the end of our Canadian section because of his deep roots up north; the Sudbury native was still attending university in Ottawa in the early 1960s when he began working for the CBC, hosting all sorts of music, news and sports shows on radio and TV, including a stint as morning man on Toronto’s CBL (740), long before viewers south of the border got to know him as a quiz show host.

Top of the Tower Podcast #035: An Update on All-Digital AM