*For dozens of stations across NERW-land, the FCC deadline that’s approaching Friday will be a tight one. From Maine to Ohio, stations in Phase 4 of the ongoing repack of digital television are still awaiting tower climbers, antennas and even transmitters as they try to either be ready for their new RF channels – or they’re keeping lawyers working overtime filing extension and STA requests as they realize they might not be up and running at full power by the end of this repack phase.

We don’t have a full count yet of who’ll make the deadline and who’ll miss it, and it’s very much a moving target in these last few days, when any glitch in a tight timeline can have big ripple effects. In Syracuse, WSYR-TV (Channel 9) viewers aren’t getting a consistent signal on either its old channel or its new one, for instance, due to what appears to be an amplifier module failure in the old channel 17 transmitter – a particular problem for a Nexstar station that’s also off DirecTV because of the company’s carriage dispute. 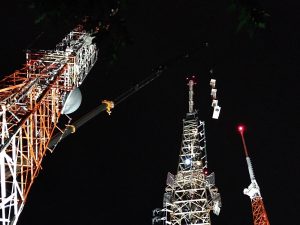 Here in Rochester, it was a burned out motor on a giant crane that kept WXXI-TV from replacing its old top-mounted channel 16 antenna, forcing an early switch to channel 22 from a lower powered side-mounted antenna (and possibly weeks of delay before the big crane can once again get up Pinnacle Hill to finish the job.)

For viewers across the region, the reminders to “rescan your TV” will be ubiquitous this week, especially with some stations moving to new facilities ahead of the August 2 deadline and others waiting until the last moment. No matter how much that message gets pushed out in on-air crawls and on social media, some viewers still won’t get it, of course – and some will still lose signals, especially in the markets where stations are leaving UHF or high-band VHF for the problematic terrain of low-band VHF. (That includes three prominent public broadcasters, WGBH in Boston, WSBE in Providence and WQED in Pittsburgh, headed for channels 5, 2 and 4, respectively.)

And for stations that can’t hit the deadline, it’s not as though equipment or crews will be in any more abundant supply after this week; Phase 5 takes the repack caravan south, with just as much demand there for cranes and climbers and mask filters and transmitters as our region had in Phase 4.

One more wrinkle in the repack: we’re hearing about occasional glitches as some antenna-based DVR systems (TiVo in particular) try to cope with the changing channels; if they’re depending on a database from their provider instead of directly scanning for new signals, some aren’t getting updates fast enough.

We’ll be watching as the deadline approaches, and we’ll be back with a comprehensive report next week.

*In MAINE, Bob Bittner’s WJYE (1280 Gardiner) has a new owner. After running standards and classic country under Bittner, WJYE relaunched Friday as “Fun Oldies 1280” as buyer MaineInvests LLC closed on its $106,300 purchase of the AM signal and its FM construction permit, W292FZ (106.3 Gardiner) – for which it’s already applying for a big move to a more powerful signal, running 175 watts from Maine Public’s Oak Hill site in Litchfield.

*In RHODE ISLAND, there have been few TV institutions with the staying power of Frank Coletta, who’s been with WJAR (Channel 10) for 41 of the station’s 70 years. Coletta announced during WJAR’s 70th anniversary special that he’d be stepping down this past Friday, leaving behind the “Sunrise” morning anchor chair he’s occupied since 1985. Coletta came to WJAR from Emerson College and a few years in radio, starting in 1978 as an assignment editor and then a reporter before helping to launch the morning newscast; no permanent replacement has been named yet.

In New Brunswick, Bert Baron is exiting the Beasley cluster to become the city’s new public information officer. Baron has been PD and morning host at WCTC (1450) for the last six years, as well as handling production duties for sister WMGQ (98.3). 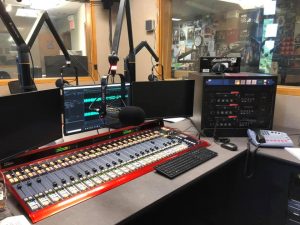 And over at Rutgers University’s WRSU (88.7), how about that spiffy new studio that goes into action this week?

It’s the handiwork of Nick Straka’s NS Radio Engineering, and the centerpiece is that custom SAS console with the trim anodized in Rutgers scarlet. (Maybe you saw it on display in April at NAB in Las Vegas?)

There’s RCS Zetta automation coming next month, too – and once it’s all done, we’re looking forward to heading to central Jersey to see it in person. (photo: Nick Straka)

*Matthew Braccili brought Spanish-language radio to PENNSYLVANIA‘s Lehigh Valley in the early 2000s, and now his investment is paying off with the sale of his entire WHOL Radio Inc. cluster to a new Spanish-language broadcaster. From his original station, WHOL (1600 Allentown), Braccili added WEST (1400) in Easton, then took the stations to FM under the “Mega” brand with the addition of three translators to blanket the valley – W295CR (106.9 Allentown) fed by WHOL and W258BM (99.5 Bethlehem) and W288DS (105.5 Easton) fed by WEST. 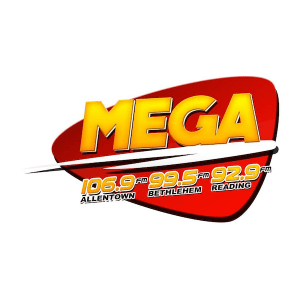 The buyer is Victor Martinez’ Hispanic Broadcasting Radio, LLC (aka VP Broadcasting, LLC), and the price tag is an impressive $1.35 million, $250,000 in deposit and cash at closing and a note for $1.1 million. Martinez, who programmed WLZL in the Washington market, takes over immediately under a time brokerage agreement; it’s not yet clear what becomes of Mega’s Reading-market simulcast, over W225CF (92.9) and an HD subchannel of Allentown’s WLEV (100.7).

*Radio People on the Move: Josh Wolff is on his way to iHeart’s Allentown cluster as the new PD of WAEB-FM (104.1) and WZZO (95.1), taking on those top-40 and rock roles after four years in Phoenix programming adult hits KYOT and AC KESZ. Wolff replaces Derrick “DC” Cole, now in a national role overseeing top-40 for iHeart.

In Philadelphia, December 6 will mark the end of a 26-year run in middays for Debbi Calton – who, even with that long tenure, is far from the longest-running air talent at Beasley’s WMMR (93.3). (That record, of course, belongs to 38-year veteran morning man Pierre Robert.) Calton started rocking Philadelphia in 1983 at the former WYSP (now WIP-FM) before jumping to WMMR in 1993. There’s a search on for her replacement; in the meantime, WMMR says it will honor her throughout November by playing vintage airchecks and posting “as many embarrassing photos as she will allow.”

(One other note: while other media companies find themselves on the receiving end of complaints and lawsuits over equal pay issues, Beasley’s news release on Calton’s retirement plays up an early incident in her career when she stood up for herself after learning she was being underpaid. “I was told at that time that I was just a little girl who, until they taught me, didn’t know anything and that I would never work in radio again,” Calton said in the release. It’s probably no coincidence, we’d observe, that much of Beasley’s corporate leadership and media relations team is made up of women, still more unusual than it ought to be in the business.)

One more Beasley note – to honor the Rolling Stones’ latest Philadelphia appearance last week, classic rocker WMGK (102.9) rebranded as “102.9 MCK” for a day on Tuesday, using those mock calls and playing nothing but the Stones in honor, of course, of Mick Jagger.

(But wait, you say – “WMCK” was the callsign of the original AM station on the other side of the state in McKeesport. You’d be right, and the former WMCK was in the news last week, too. In its present silent form as WGBN 1360, licensee Pentecostal Temple Development Corp. was hit with a $25,000 FCC fine for numerous lighting and marking violations at its four-tower site in Lincoln Borough. The FCC says Pentecostal tried to petition for reconsideration or a payment plan, but that it bungled the paperwork and didn’t send it to the right Commission staffers.)

*Over at Entercom’s WTDY (96.5), Karle Yanocha is out as morning producer/midday talent (“with no reason and no notice,” she reported on social media.) She came to TDY last fall from WMGM in Atlantic City, where she was morning co-host and briefly did afternoons.

We haven’t been down in the Southern Tier lately, obviously – which explains why it’s late July and we’re only now noting that Sound Communications relaunched WGGO (1590 Salamanca) with a talk format in March after several months of silence. When last we checked in on the station a year or so ago, WGGO was simulcasting rock FM sister WQRS (98.3).

*Another entry in our “CANADA is miles ahead of the US when it comes to ownership consolidation” files: Bell is asking the CRTC for permission to buy V, the number-three television network in Quebec. The former TQS network has been a pretty distant number three behind Quebecor’s TVA and Radio-Canada’s ICI throughout its history, though it has had some successful programming under its current owners, the Rémillard family. 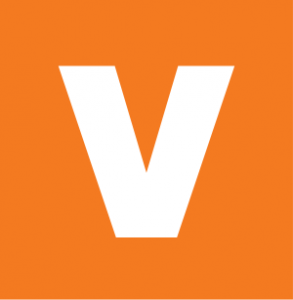 The terms of the Bell/V deal haven’t yet been made public, though its announcement said that V’s specialty cable channels won’t be included in the sale. But Bell will get V’s local TV stations in five Quebec cities, including CFJP (Channel 35) in Montreal and CFAP (Channel 2) in Quebec City. In Montreal, CFJP would reunite once again with Bell’s CTV affiliate, CFCF-TV (Channel 12), marking the third time those stations have been under common ownership – the Pouliot family, which started TQS in the 1980s, owned CFCF back then, and then-Bellglobemedia had purchased CFCF by the time it became a minority partner in TQS in 2001.

*And while it’s no longer even really news when a prominent radio host says something stupid on Twitter, it seems to keep happening. This time, it’s Mike Stafford, the veteran Toronto talker who’s been part of CFMJ (Global News Radio AM 640) since 2001, most recently as morning co-host alongside Supriya Dwivedi.

Stafford fired off a few tweets last weekend about Muslims and South Asians in the waiting room of a suburban Toronto hospital, later deleting them, but it was enough to pull him off the air last week. As of Sunday night, he’d deleted his entire Twitter account, and it wasn’t clear as of our NERW deadline whether the Corus-owned talk station would bring Stafford back this week or whether (as he mused on Twitter before deleting the account) he’s been fired.

Top of the Tower Podcast #041: The Voice of the Navajo Nation

Top of the Tower Podcast #041: The Voice of the Navajo Nation