*It’s that time of year – a winter storm is threatening the Atlantic seaboard and your editor would, in ordinary times, be headed somewhere south or west in search of warmth and sun.

Not this year, of course, and that’s had some unexpected side effects. It means our reserve of “Tower Site of the Week” material is much lower than usual, which is why we took a longer-than-planned holiday hiatus from those weekly segments, which will resume this Friday with the end of our 2019 Texas expedition.

And it means that vendors can’t make their usual rounds to visit local chapters of the Society of Broadcast Engineers, many of which are instead doing virtual meetings – which in turn makes it possible for your editor to be doing a bunch of virtual “travel” to present his slide show of interesting broadcast facilities to chapters in places ranging from Nashville to southwest Ohio to southern California to Wisconsin over the next few weeks.

(Perhaps we’ll make a video version of it available here to subscribers, too, if you’re interested?) 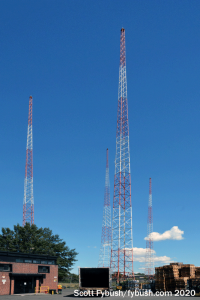 One of the themes of this year’s version of our presentation is the endangered state of so many AM transmitter facilities these days, and one of the sites we feature is one of the most endangered right now.

That’s WFME (1560)’s four-tower site in Maspeth, Queens, which owner Family Stations sold to a developer last year for a whopping $51 million. When the sale was announced, we knew a few things: first, that the buyer, a logistics company, was going to move quickly to repurpose the site for its new role of parking trucks and eventually building warehouses; second, that relocating a high-power AM facility in a major urban area in 2021 is a huge challenge.

We knew, too, that WFME had a brief reprieve to stay on the air from Maspeth, but only a brief reprieve – and now we know when that reprieve ends. WFME is already running with reduced facilities, thanks to damage done to several transmission lines during soil testing at the site. And as it’s telling its listeners, on February 12 it will sign off for good from Maspeth, ending more than 80 years of operation from the oldest (and next-to-last) AM site within New York City limits.