*When news of Larry King’s death began spreading early Saturday morning, most of the reminiscing centered on his many years as a TV interviewer, chatting up politicians and celebrities in front of that famous light-up backdrop on CNN. To younger people, King was a curious holdover from an earlier era, known as much for his ubiquitous infomercials as anything else.

It’s that earlier era that we remember in this space, not because King ever made his home base on local radio in his native New York – the young Larry Zeiger left Brooklyn after high school to start his radio career in Miami – but precisely because of the critical role King played in the return of national radio in the late 1970s.

Let’s set that scene: when King’s midnight-to-dawn talk show debuted on the Mutual Broadcasting System (bwee-doop!) in early 1978, it arrived at a moment when national network radio was all but defunct. Network dramas, comedies and soap operas had disappeared almost two decades earlier, with CBS’ Mystery Theater hanging on as a lone survivor. NBC’s ambitious Monitor had succumbed three years earlier, while its spiritual successor, NPR’s All Things Considered, was still finding its footing (and Morning Edition was more than a year from its launch.) There were hourly newscasts on the networks, some sports play-by-play, and syndicated music shows offered on LPs or tape.

When it came to national talk programming, though, it was Mutual in the late-night hours or nothing, and it was struggling in that slot, too. Herb Jepko, who’d run a “national” overnight show over just a handful of big clear-channel AMs including KSL in Salt Lake City, had gone to Mutual in 1975 for national distribution, but disagreements over the show’s format and direction ended that run after two years. Mutual then picked up “Long John” Nebel, the New York talk veteran (WNBC, WMCA) who was doing overnights on WOR – but Nebel’s health was failing and his show lasted only a few months.

And then came Larry King. 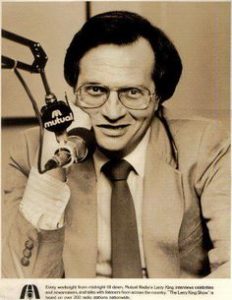 In twenty years of radio and TV in Miami, King had found a niche – a mix of celebrity interviews, open-line phone conversation and his own observations about food, movies and politics – that had made him a local star on WMBM, WKAT and WIOD.

From his new home base at Mutual’s headquarters outside Washington, King honed that formula into a national success story. He’d hit the air at midnight, spending the first hour and a half or so of his show interviewing an author, politician or celebrity before opening the phone lines to allow callers to question the guest for another hour and a half. By 3 AM or so, it was a freewheeling “Open Phone America,” right up until he went off the air at 5:30.

The show was a hit. At its peak, it boasted more than 500 affiliates and drew thousands of would-be callers every night, even though it was a toll call to Virginia back in the days when long-distance calling was expensive. King got a column in the new “USA Today” when it launched in 1982, offering bite-size bits of opinion that we’d recognize today as tweets, and in 1985 he launched “Larry King Live” on CNN, giving him a spotlight to attract top-tier guests and making King himself into a national celebrity. 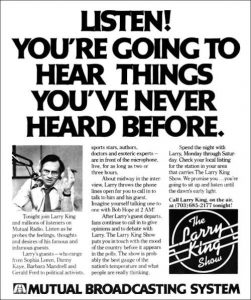 In 1993, King handed over his late-night radio chair to Jim Bohannon; he continued on Mutual in an afternoon slot for another year before leaving live radio behind, though Mutual offered a simulcast of the CNN show until 1999.

By then, of course, King had changed radio dramatically. It was because of Larry King’s success late at night (and aided by the wider availability of satellite transmission) that ABC, NBC and Mutual began to launch more extensive slates of syndicated talk programming in the early 1980s. Because of Larry King at night, there was Dr. Dean Edell and Sally Jessy Raphael during the day. Because of Edell and Raphael, some existing local talk stations began to feel more comfortable adding national offerings, and many other AM stations flipped to talk formats. That, in turn, set the stage for the even bigger national talk explosion of the 1990s; it’s no exaggeration to say that Rush Limbaugh and Sean Hannity and Glenn Beck had the platforms they did because of Larry King paving the way. The same, of course, was true of his late-night successors such as Art Bell.

Few of them, though, matched King’s broad appeal. You didn’t have to subscribe to a specific political ideology or espouse a particular conspiracy theory to appear on or to enjoy King’s radio shows. It was a flavor of mass-appeal talk radio that, in retrospect, represents a road ultimately not taken by the format.

Larry King died Saturday morning in California after having been hospitalized with COVID-19; he was 87.