*It’s hard to find a broadcaster anywhere in New England who didn’t have a strong opinion about Brian Dodge. For more than three decades, he located available FM (and sometimes AM) channels and filled them with religious programming, sometimes in keeping with the details on his FCC licenses, and oftentimes at a bit of an angle to them.

Dodge trailed a history of lawsuits, Commission complaints and health issues behind him, especially in recent years as his activities slowed down. Now his saga is over, with the news that he died in a car crash sometime between August 13, when he was last seen by his family, and the morning of August 17, when he was found dead in his Toyota Corolla off an embankment in the western Massachusetts town of Chesterfield, near his home in Worthington. 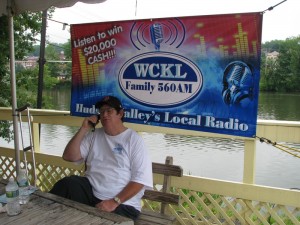 How long a trail? We first began reporting actively on Dodge’s activities back in 1997, when we covered the filing of an extensive complaint against Dodge from Carter Broadcasting, which was unhappy that Dodge’s illegal operation of several translators in the Pioneer Valley was damaging its own business at WACE (730) in Chicopee. But the complaint (which you can still read at the Archives @ BostonRadio.org all these years later) tracked Dodge’s issues back to the 1980s, when he was first applying for new facilities in Vermont and New Hampshire, often using other names as a front to conceal his own identity.

Under the callsign “WTIJ,” Dodge built several stations whose allocations survive to this day – what’s now WZLF (107.1) in Bellows Falls, then the Waterbury signal that’s now WWMP (103.3) serving Burlington. In other cases, he won construction permits for stations that never ended up getting licensed (even if they made it to the air, whether from the correct site or elsewhere), including another WTIJ on 1400 in Roxbury, New Hampshire, WRUT on 107.5 in West Rutland (a channel that may finally get a licensed occupant after the most recent FCC auction) and the signal he held on to for the longest, WWNH (1340) in Madbury, N.H.

In more recent years, Dodge had been trying to acquire existing AM stations as they struggled. WPNI (1430) in Amherst, Mass. and WCKL (560) in Catskill, N.Y. both came into his orbit, though neither ended up surviving. Nor did the string of LPFMs Dodge applied for in the “hill towns” of western Massachusetts, which lost their permits as it became clear that he’d used a string of fake organizations and names to evade the FCC’s one-to-an-owner rule for the LPFM service.

In the end, none of Dodge’s radio stations survived him. It took the FCC until 2016 to act on that 1997 petition, offering Dodge a consent decree that would have allowed him to keep WWNH and his remaining translators in New Hampshire, Vermont and Massachusetts, so long as he brought them into full FCC compliance and was able to prove it to the Commission’s satisfaction. As we reported three years ago, Dodge failed to do that, too, losing the last of those licenses (though keeping about $165,000 from the sale of translators in the 250-mile window back in 2016.)

As one area broadcaster correctly noted in an email sharing the news of Dodge’s passing, he’s not likely to be fondly remembered by other station owners; over the years, Dodge’s applications and the stations he ran often got in the way of other, more legitimate, operators in the region. But there’s this, too: whatever his motivations, Dodge certainly didn’t get rich from any of his operations, he was deeply passionate about radio itself, and there’s no reason to think he was anything less than sincere in the religious beliefs that drove his programming.

He was, in short, a character of the kind that local radio once produced in abundance. (The story that he once filed an entire FCC application in crayon? True, as best we can tell.)

For better or worse, we’ll not see his like again, and to the extent that he provided a rich vein of stories for us to mine over the last 24 years, we’ll miss that.