*As news spread through MASSACHUSETTS and beyond about the death of David Mugar on Tuesday, the headlines were predictable: “supermarket heir, philanthropist, creator of Boston’s Fourth of July fireworks.”

Even at the station he once owned, Mugar’s important role in the history of Boston’s channel 7 registered only as a footnote, 40 years after he took his place as one of the last great independent local TV owners.

A scion of the family behind the Star Market grocery chain, Mugar was already a successful commercial real estate developer at the age of just 30 when he formed a group at the dawn of the 1970s to challenge the license renewal of RKO General’s WNAC-TV (Channel 7).

It was an era when the FCC entertained competitive applications that challenged incumbent licensees for issues such as a lack of news programming and a failure to reflect the makeup of the community. At the time, WNAC-TV didn’t carry the ABC evening news, preempted other public affairs programming, and Mugar sensed that RKO itself might be a good target for a successful license challenge. He wasn’t alone – two other groups, including one with Black leadership, also piled on to challenge RKO for the Boston license.

While the big headlines were about another license challenge that bore quicker fruit, Boston Broadcasters’ successful poaching of the channel 5 license from the Herald-Traveler newspaper, Mugar persisted for years, digging in to some questionable practices by RKO and its parent company, General Tire. As early as 1970, the Securities and Exchange Commission had reached a consent decree with General Tire about practices that included pressuring companies to advertise on RKO stations in order to do business with General Tire; later, the company admitted it had maintained a slush fund for international payoffs, and the SEC told the FCC that General Tire had been evading foreign taxes and outright bribing foreign officials. 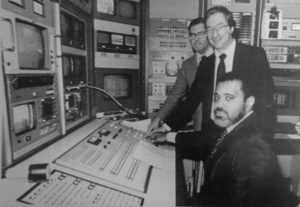 In 1980, the FCC formally revoked three RKO licenses, including WNAC-TV, but it was two more years before Mugar’s New England Television, after merging with the Black-controlled group led by Bertram Lee, could actually take over channel 7.

On May 22, 1982, after paying $22 million for the physical assets of WNAC-TV, Mugar’s WNEV signed on. Unlike the channel 5 drama a decade earlier, Mugar launched WNEV with more continuity, retaining the same Government Center studio, Newton transmitter site, CBS affiliation and most of the same staff. (In an odd bit of irony, Mugar took over channel 7 just days after Boston Broadcasters sold channel 5 to Metromedia for $220 million, ending the dream of local ownership there.)

But like Boston Broadcasters’ ambitious launch of channel 5 in the 1970s, Mugar came to channel 7 with big plans in the 1980s. With a distinctive new “SE7EN” logo, New England Television invested heavily in more local programming, most notably a two-hour afternoon magazine show, “Look,” and a variety show aimed at young viewers.

Long an afterthought in news ratings, channel 7 tried a regional approach, introducing the “New England News Exchange” to share stories with other stations and bolstering its minority staffing, making reporters such as Lester Strong familiar faces on the local TV dial.

In 1989, Mugar added WHDH (850) to his holdings, changing channel 7’s calls a few months later to WHDH-TV. But by the early 1990s, Mugar was in financial trouble, especially after buying out minority shareholder Robert Kraft; in 1992, he sold WHDH radio to Atlantic Ventures, and in 1993 he took a $215 million offer from Florida owner Ed Ansin to sell WHDH-TV.

Mugar remained a prominent presence in Boston even without his TV station; by then, he’d been mastermind of the wildly successful Fourth of July celebration on the Esplanade for two decades, a role he continued to hold until just a few years ago, turning the local show into a national TV production.