by Scott Fybush
in Free Content, Tower Site of the Week, Virginia
2

When you’re in the Hampton Roads area of eastern Virginia, you can’t really mistake it for any other large market anywhere else in the country. The geography out here is flat, and more than that, it’s wet: the cities and towns that combine to make this a sizable population center are divided by many bodies of water, connected by tunnels and bridges – and served by lots of interesting broadcast facilities, too.

So we were very happy indeed to connect with one of the engineers in town we’d missed, Dave Morgan, and even happier to get an invitation to come back down and see the AMs he takes care of.

On our way to his westernmost site on a sunny Sunday morning, headed down Route 10, the southern back road from Richmond to Norfolk, we stop along the way to see one of the outlying Hampton Roads AMs. WRJR (670 Claremont) sits off Route 626 across the James River from Jamestown and Williamsburg, sending its daytime 20 kW signal southeast over Hampton Roads. (It’s only three watts at night, and the little translator here on 102.5 doesn’t reach Norfolk at all with this Spanish-language religious format, though it’s since been granted a move across the James to Williamsburg.)

Continuing down Route 10 as it bends alongside the James into Rushmere, Virginia, we turn off the highway and follow Dave’s careful directions down through a residential neighborhood to a dirt road that runs along a pipeline route back to a big field with six towers. Since 1992, this has been the home of Norfolk’s 850 signal, now one of the most potent AMs in the market, with 50 kW by day from four towers and 25 kW at night from all six, protecting other big 850 signals as close as Raleigh and as far away as Boston and Denver.

The WTAR calls are the oldest in Norfolk, but a late arrival to this frequency. It was 1997 when Sinclair Telecable (no relation to the now much bigger Sinclair Broadcast Group) swapped calls and formats on its AM signals here, taking talker WTAR from its longtime home on 790 and moving news-talk WNIS from 850 to 790. 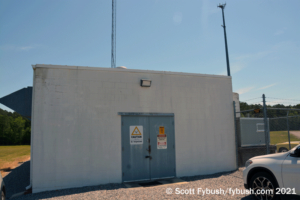 We’ll get deep into the history of 790 and the WTAR calls in our next installment, and we’ll come back to the history of 850 in a moment, but first let’s take a walk through this very simple, clean facility that hasn’t changed very much since it went up in the early 1990s.

Inside the front door of the white-painted block building are two rows of equipment: on one side, a big Kintronics phasor for the day and night signals, and on the other, a Harris MW50 that is the main transmitter here, backed up by an older MW5 that was installed in 1977 at the previous 850 facility closer to town and served as the main transmitter there until WNIS increased power and moved out here to Rushmere.

(How sprawling is this market? It’s 26 miles from here to downtown Norfolk, most of it along the water path of the James River and the salt water of Hampton Roads, and more than 40 miles eastward to the boardwalk at Virginia Beach, at the fastest-growing end of the metro.)

So what led 850 all the way out here? The story starts with two of the many new AMs that popped up here after World War II as the region’s population exploded. WCAV (for “Cavalier Broadcasting”) hit the air in February 1948 as a 1000-watt daytimer on 860, using a single tower near the mouth of the Elizabeth River in Portsmouth, while WRAP signed on in October 1952 on 1050, as a 500-watt daytimer from a site east of Norfolk in what’s now a very commercial section of Virginia Beach. (It had to wait to claim 1050 until the first user of that frequency in the area, WVEC in Hampton, moved from daytime-only service on 1050 to full-time on 1490 in 1951.)

WCAV moved to 850 in July 1950, raising power to 5 kW by day and adding 1 kW night service with three towers. WRAP, meanwhile, was the first station in the market targeting Black listeners, and it was a big success, so much so that in 1954 Rollins Broadcasting sold the 1050 signal (it became country station WCMS), bought 850 and moved the WRAP calls and format there.

After more than three decades on 850, WRAP moved again in 1987, when the predecessor of Sinclair Telecable bought the 850 facility, selling the intellectual property and WRAP calls, which moved up the dial to 1350. (We’ll catch up with that license later on!)

Another three decades on, the WRAP callsign lives on in one spot out here – there’s a plastic trashcan in the corner of the building still marked “WRAP,” having survived call and format changes and a move out here from the old 850 site! 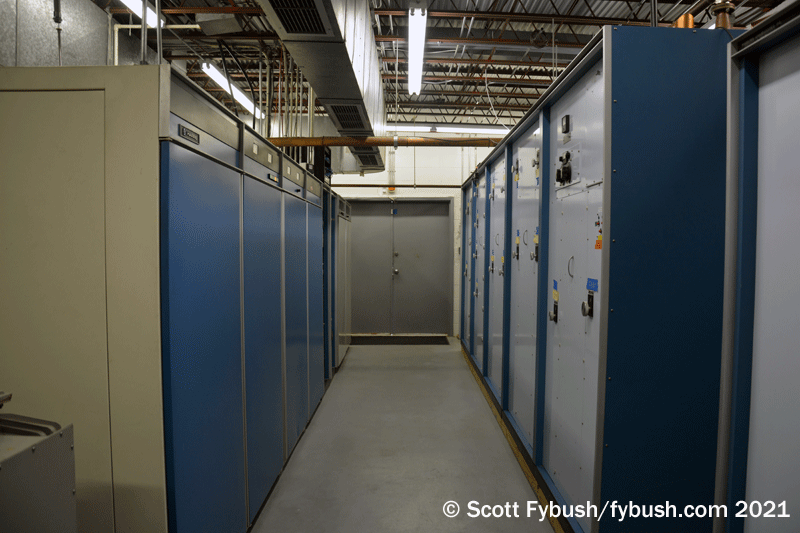 Sinclair launched the news-heavy WNIS format on 850, and it was successful enough that it prompted the power increase and site move out here just a few years later – and that’s how we ended up out here on this sunny May Sunday afternoon.

These days, the WTAR calls on 850 are paired with a sports-talk format, and the big reach of the AM is augmented by two translators on 96.5, one in Newport News/Hampton that’s paired directly with the AM and the other in Norfolk, fed by the HD2 of sister station WUSH (106.1).

The big reach of the AM still matters, though, at least to FEMA – this is the PEP (primary entry point) station for the region, and so the usual fenced-in compound of FEMA enclosures sits next to the main transmitter building, holding a generator and an emergency transmitter that can be put on the air in case of national emergency.

And because we know someone is going to take a close look at the cars in our pictures of the transmitter compound: yup, that’s a 1957 Studebaker in gorgeous lemon yellow parked out front, part of the collection of veteran Virginia engineer John Heimerl, who’s joined a little gathering of local engineers to get our tour and share some stories.

And don’t miss a big batch of Hampton Roads IDs next Wednesday, over at our sister site, TopHour.com!

Next week: WNIS, Norfolk… and more