*One of the biggest format changes in recent memory in CANADA takes its final form this morning in Toronto, as CINA Media Group’s CKFG (98.7) takes on the “Flow” branding that it’s now licensing from competitor Stingray, while Stingray’s own CFXJ (93.5) switches from R&B/hip-hop to a new hot AC format as “Today Radio.” 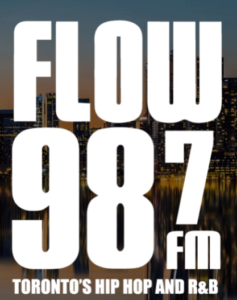 The double flip started Wednesday afternoon, when Stingray went jockless on “Flow 93.5,” while across town 98.7 began replacing its former “G98.7” imaging with its new “Flow 98.7” identity. On Sunday, 93.5 dropped its former playlist in preparation for the relaunch as “Today” today.

What gives? For CINA (owned by Neeti P. Ray) and CKFG, it’s an opportunity to start a new chapter after last year’s purchase from Intercity Broadcasting Network, the former ownership group that was plunged into bankruptcy after the death of Fitzroy Gordon. While Gordon’s G98.7 focused narrowly on Toronto’s Caribbean-Canadian population, Ray had already been making moves to expand the station’s reach to more of the city’s Black community, a move that will be aided by acquiring the rights to the familiar “Flow” brand that had been on 93.5 since 2001 (with a brief rebrand from 2016-2019 as “Move.”)

Stingray says it had been working on its own “Flow” refresh, to make the station more community-focused, but it said once it realized its move would put it into tighter competition with CKFG, it decided instead to offer Ray the opportunity to take over “Flow” and, with it, a monopoly position for Black audiences in town.

“Flow 93.5FM has been a powerful brand in the GTA for many years,” said CKFG GM Gary Gunter in a press release. “Coupled with the historical legacy of G98.7FM and what it has meant to the Black community, this move demonstrates our commitment to serving Toronto with a radio station that further invests into the tastes, issues, needs and lifestyle of its loyal listeners. We are thrilled to bring together two of the most respected radio stations at 98.7FM.”

There is, of course, a more cynical explanation, too: Stingray’s license at 93.5 comes with no format restrictions, while the 98.7 license has specialty programming restrictions that obligate it to continue serving a Caribbean audience, with 50% of its music coming from the “world beat and international” category. Simply dropping the “Flow” format in favor of hot AC, while it would have been perfectly legal, would also have created a PR nightmare for Stingray, which the company can avoid – at least to some extent – by handing off the branding to Ray’s 98.7.

It’s still not clear how much of Flow, beyond the name, will move over to 98.7, which already has its own established talent lineup. Nor is it clear how much Toronto’s Black community will protest the loss of one of its two stations and the weaker signal reach of 98.7 compared to 93.5. (There was protest, though to no avail, last year when the 98.7 license changed hands to non-Black ownership.)

“The radio station is like a dinner party, with friends sharing laughs and stories. We’re doing what a playlist can’t do and connecting with people through real-life experiences and emotions,” said GM Steve Parsons. In addition to a wide “we play anything” playlist led by PD Crosby McWilliam, the station will feature lots of audience interaction via phone, text and social media, inviting listeners to “drop in anytime.”

We know at least some of the talent who will be heard on “Today” today: The morning show features Paul Harper, the Scottish jock who’s been on sister station “Boom,” and Nikki Balch, who left Montreal’s CKBE (92.5 the Beat) last year. Tyler Barr, formerly of Montreal’s “Virgin” (CJFM 95.9) will be heard in middays. In afternoons, Paul McGuire comes from a TV career at YTV and CMT and from Stingray’s country stations in the Maritimes, paired up with Vanessa Newman of Vancouver’s CKZZ (Z95.3). Evenings will feature Stingray’s syndicated Katie & Ed, based in Calgary.